Birthplace of the comedy club still has its gems | TRNTO.com
Skip to content 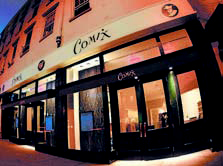 AN IMPROMPTU TRIP to New York City gave me the chance to check out a new comedy club, Comix, located in the trendy Meatpacking District.

Featured that night at the club were Glenn Wool, a Canadian who has spent most of his career working in the U.K., and Iliza Schlesinger, this year’s winner on Last Comic Standing.

There’s a lot of heat on Wool right now. Resembling an overgrown garden gnome, he shouts and rants about a lot of things both political and personal. His diatribes against religion were masterful — still, everything was delivered at the same level of intensity. Schlesinger left me cold. By the time she finished, I felt she was better at winning contests than stand-up comedy.

But the room! An expansive, tiered beauty full of slow curves and designer colours — not the NYC comedy club of yesteryear.

It takes me back to the glory days of the scene in the late ’70s. The club is really a New York City invention. In the late ’60s, Budd Friedman opened up the Improvisation in Hell’s Kitchen so his Broadway friends could drop by after shows. They started to entertain one another on the old upright piano. Comics started to trickle in. By the mid-’70s, the comics outnumbered the singers, and the comedy club was born.

The original Improv was a cramped, rickety place that only New Yorkers could have invented. Customers were stacked on top of one another until you couldn’t breathe. No designers were involved — the only decor was a truckload of bric-a-brac from who knows where. But it worked.

Soon, two clubs had opened on the Upper East Side with the same formula, each evolving into their own personalities. Catch A Rising Star became the hottest club for a long while due to its excellent booking policies and its even better bar scene.

The Comic Strip had a less frenzied scene. The crowds came from the boroughs, but it was where young comics went to try material for a “real” crowd. Eddie Murphy cut his teeth in this club. Of the three original NYC clubs, it’s the only one in business today. Then, in the ’80s, Caroline’s came along and changed the game.

Bouncing from locations in Chelsea and Seaport before its posh Broadway digs, the club was the first to book headliners instead of a hodgepodge of comics. It is still the best comedy club in NYC. But certainly not the only one.

Besides Caroline’s and Comix, there’s also Gotham in Chelsea, a swank and spacious room featuring mostly TVfriendly acts. Downtown, you might check out the Comedy Cellar, a cramped sweaty room in the Village that has the look and feel of a classic club. Stand-Up New York is a jewel box of a room on the Upper West Side that books smart, clean acts that haven’t conquered TV yet but probably will.

Avoid the temptation to go to Dangerfield’s on the East Side. The room is beautiful in a Tony Soprano kind of way: plush red leather banquettes, older wait staff. But the bookings are second rate. It’s a bit of a tourist trap. Same with Ha! in the theatre district.