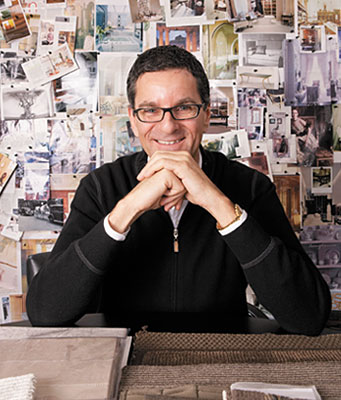 BRIAN GLUCKSTEIN SAYS that he’s an “old soul,” but he has no trouble remembering the defining act of his childhood.

“I used to move the furniture around,” says the 47-year-old designer during an interview at his offices on the edge of Yorkville in downtown Toronto. “I was rearranging everything in my bedroom. Most little boys were not doing that. It was apparent that I’d have some interest in design.”

Flash forward five decades and Gluckstein is still moving furniture around: he’s established himself as one of Canada’s most acclaimed designers and decorators.

His glowing rep rests mostly on his work designing private residences at home and abroad, but he’s also got a variety of immaculate public spaces on his resumé, including the Windsor Arms Hotel and the Four Seasons Hotel in Toronto. Gluckstein is very much the public face of his firm, appearing regularly on CityLine, with Marilyn Denis, and lending his imprimatur to a popular line of home furnishing products.

It would be entirely appropriate to call him a superstar within his field, but there’s nothing about his demeanour that suggests a yen for the spotlight. He’s self-effacing but precise, a description that also applies to his aesthetic. “If there’s a consistency in my work,” he says, “it’s cleanness or a lack of clutter. I can’t live with clutter.”

Ironically, it was a desire to unclutter his schedule that led to Gluckstein starting his own business. “I wanted to work at a slower pace,” he explains. “It wasn’t because I had any grand ideas about the business. It was because I kind of wanted to take a break.”

He credits his first employer, the noted Toronto interior designer Linda Borman, for instilling an appreciation for smaller-scale set-ups. “It was an incredible environment for me because it was small,” he says. “If I had worked in a large firm with hundreds of people, it would have limited my exposure to the details of the business. So I had a good foundation when I opened my own office.”

He makes it sound like a small step, but obviously it wasn’t. Gluckstein admits that, like any business, design can be as much about who you know as what you do and points out that he was fortunate to make some solid contacts early on.

“I was very lucky because I had worked on a few projects that were considerably larger than what most people starting out would do,” he recalls. “People I barely knew had recommended me for important jobs with well-connected clients. It wasn’t on the level that I’m working on today, but they were still considerable budgets.”

Budgets aren’t the only things that have risen over the years: Gluckstein has also had to raise his game to accommodate a scarily well-informed — and more demanding — generation of clients.

“The clients have become more design savvy and aware of the environments around them,” he says. “In some ways, It’s easier to work with them, but they also have higher expectations. When I started, there was no Home and Garden Television, the magazines were limited to trade publications, and the Internet didn’t exist. People are going to hotels that are high design, restaurants that are high design … they’ve been exposed to more.”

Not that anyone is telling him how to do his job. Whether he’s designing a new space or refurbishing an older structure, Gluckstein’s approach remains the same: a carefully mappedpit three-step process encompassing planning, construction and decorating. And his design tips for the everyday decorator? “Before going out to buy furniture, have a plan,” he says. “Know that the access to the space is such that the furniture will fit comfortably, especially when dealing with elevators or staircases.”

“Also, when choosing paint colours, have samples made for the room because different exposures will affect the colour, and when investing in a renovation or large-scale decorating project, hire a professional…”

“Toronto as a city has become better and better, so neighbourhoods like Forest Hill are experiencing sort of a ‘new wave’ of people looking to live there.”

Gluckstein has design knowledge to spare, but he says he signs on to fewer projects a year than you might think but can’t come up with a hard number because different jobs of different sizes will be at different stages for as long as three or four years.

It’s also because he’s a little bit picky. “Some people have come to us with requests that aren’t suitable for our sensibilities,” he says. “In those cases, we’d have had to struggle to satisfy their aesthetic needs. But I don’t like sameness.

Flexibility is one thing, but at this point, Gluckstein works almost exclusively with an upscale clientele. He doesn’t apologize for this (nor should he) but he is aware of it.

He created the Gluckstein Home line as a way of making his work more accessible to a wider audience.

“It came about because people would see our work in magazines or on television on CityLine, and we would get e-mails about where to get [these items],” he says. “The focus of the line, which was originally for Eaton’s and is now at the Bay, was to make it affordable. I had people telling me that the average-income person didn’t have the same sensibilities as my clients, and I said that that was completely untrue.”

Asked if money is a prerequisite to good taste, he just laughs. “No. [Some people] have money and no taste or maybe just no interest.” The collection’s success, meanwhile, speaks for itself. “The numbers are great,” he says and smiles, “but of course I can’t divulge them.”

He also can’t divulge the names of the people he’s designed private residences for. It’s an oft-made request, and he always demurs. “I have relationships with extraordinary people,” he says. “But you know, it has to be confidential. Sometimes, though, I look at [my clientele] and wonder how I could ever have met these men and women — some of the most interesting people in the world.”

He will admit to doing a lot of work in and around Forest Hill, an area he says is being “rediscovered.” “It’s become quite diverse, shockingly diverse,” he notes.

“A lot of people had moved out [of there] because they wanted ‘new, new, new.’ But Toronto as a city has become better and better, so neighborhoods like Forest Hill are experiencing sort of a ‘new wave’ of people looking to live there.”

Does Gluckstein’s assessment that the city is getting ‘better and better’ have to do with the influx of spiffy new public architecture?

“Some Canadian architects are doing extraordinary work, and I hope they can change the face of the city,” he says, at the same time noting his dismay with a lot of Toronto’s preexisting architecture: “There are some very disappointing structures we’ll have to live with for a long time.”

He implies that the solution is not to raze retrograde buildings to the ground; however, the key is to strike a balance, integrating new designs while retaining a sense of history. “A city that doesn’t embrace history is a city without a soul, he says.”

It’s the same philosophy that Gluckstein applied to his own home, which he describes as “an example of how to maintain an old facade while building a new house within it.”

It sounds lovely, but it’s a given. The question is whether he’s able to stifle his professional discretion when he visits the homes of friends.

“Unless it’s really great or really bad, I don’t notice that much. I do notice if a space is comfortable. If I sit on furniture that’s comfortable, I love it. It doesn’t matter what it looks like. If it’s uncomfortable, I can’t stand it. That’s the benchmark for me.”

Surely, though, there must be some people who get nervous having a design guru in their place.

“Some people do get nervous about me coming over,” he says with a smile. “We usually end up going out for dinner.”