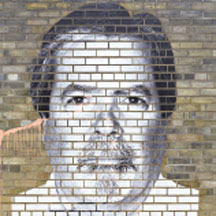 AFTER THE DON Valley Brick Works closed, the dilapidated kiln buildings were home to legendary raves, bush parties and graffiti artists. Now, as the revitalization is underway and the Brick Works is transformed into a “Centre for Urban Sustainability,” the future of the site is butting heads with its rich history in the form of years of graffiti art on the building walls.

Instead of blasting away the colourful reminders of the past, Evergreen, the group restoring the site, decided to keep the majority of graffiti. In addition, the group is adding some of its own to the mix, enlisting one of the city’s leading street artists Dan Bergeron, a.k.a. Faux Reel, for the job. “I hadn’t been through the Brick Works for about 16 years,” Bergeron says. “I think the last time was to get directions for a rave.”

Bergeron was approached by the group Diaspora Dialogues to be part of a Doors Open exhibit. “I was completely surprised that they were going to keep the graffiti,” Bergeron says.

“Evergreen’s progressive view is that the graffiti is a layer of history on the site. When the site closed and was abandoned, it was the graffiti writers who claimed it and made it their own.”

Bergeron’s work involved photographing six former employees who were at the Brick Works when it closed in 1984.The larger-than-life portraits were created, sliced and stuck on the wall brick by brick in a painstaking process documented on Bergeron’s website.

“Although I immediately knew that I wanted to photograph workers who were there when the site closed, I wasn’t sure what to do with these images,” Bergeron explains.

“After much thinking (staring at the ceiling and surfing the Internet), I realized how important it was that I reveal who these men are.”

Although meant to be temporary, Anthony Westenberg, manager of public relations for Evergreeen, says the portraits will remain up as long as possible.

“We’re going to work around them,”Westenberg says. “What I love about Dan’s work is that it combines all of that history (from brick workers to graffiti artists) to almost close that chapter.”

Go to evergreen.ca for info.