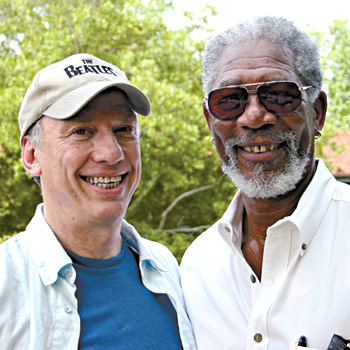 MORE THAN 40 years after being arrested and jailed in Mississippi for his civil rights work, Paul Saltzman, an Emmy-winning producer-director and Northview Heights Secondary School graduate, returned to the south to see how the social and political landscape had changed.

While there,a chance meeting with actor Morgan Freeman led him to his latest project,Prom Night in Mississippi,a compelling documentary following the high school students of Charleston, Mississippi, as they organized their first racially integrated prom in 2007.

“In 2006, I went back to Mississippi for a week just to look around and see how things had changed, and through a mutual friend I met Morgan Freeman,” he says. “We spent a whole day together and just talked and shared meals, and I thought what he was saying was really important, profound, heartfelt and wise.”

Saltzman had been working on another project documenting his own return to Mississippi when one of their researchers struck up a conversation with a local teen.The young lady explained that at her high school they had one prom for the white kids, another for the black kids. She said that Freeman had once offered to pay for an integrated prom,but no one had ever taken him up on the offer.

Saltzman quickly called up Freeman, who assured him that the offer still stood, and soon plans were in motion as students worked to end the school’s long history of racial segregation.

After working with the students of Charleston, Saltzman reflects on his own days as a student at Northview Heights where he excelled in math.

The teacher I enjoyed the most was my math teacher, Ross Honsberger,” he says. “He loved his subject, probably more than most teachers, and therefore he loved teaching it and would teach it with imagination and flair.”

It was shortly after graduating high school that Saltzman found himself in a divided and hostile Mississippi for the first time, a journey which has now come full circle with the success of Prom Night in Mississippi.

“I was in jail for 10 days, and I was so blown away with what I was seeing, in terms of race relations and how blacks were treated,”he says.“And then at the first screening of the film,we invited the kids,and as they started coming down to the front of the packed theatre, the whole audience stood up and gave them a standing ovation.It was just so heartwarming to see them being recognized for their courage in that way.”