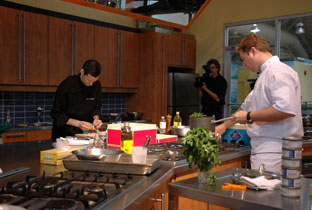 Toronto’s Daily Bread Food Bank got some much-needed help on Friday from Bruce Woods of Brassaii and Tom Brodi of TOCA, who competed against each other in a friendly cook-off to raise awareness about Toronto’s need for donations of nutritious food. The chefs had just 30 minutes to improvise a recipe using food bank-type ingredients (like canned food) that were revealed to them moments before they began cooking.

The event, held at the President’s Choice Cooking School at Loblaw’s Queen’s Quay Market, kicked off the three-week-long 2011 Extra Helping Spring National Food Drive. Loblaw chef Tom Filippou provided play-by-play commentary for the four judges and a roomful of onlookers and media. The secret ingredients, chosen from some of Daily Bread’s most needed items, included basmati rice and canned items like salmon, corn and kidney beans. 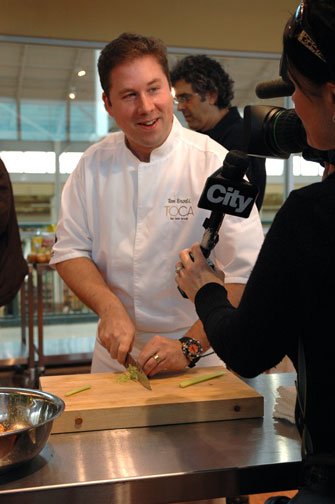 We spoke to the chefs about making great meals at home using basic ingredients like the ones they were given for the cook-off. “You can make anything out of anything,” says Brodi (left), naming spices as the element that makes the difference. “That’s what’s going to put your own flare on the plate.” When you get tired of your routine meals, he suggests getting ideas for new recipes online (the Food Network’s site should do the trick). Chef Woods emphasizes the importance of preparing in advance, maybe even planning “a bit of a menu for the week” and having ingredients ready, “so when you come home you know what’s in the fridge, instead of rushing around to pick things up after work.”

Judges and spectators were mostly stumped as to how they themselves would make a gourmet meal if given the same simple ingredients, but the chefs pulled through. Woods ended up creating a potato rosti salmon pizza with parsley pesto. Brodi, judged winner by a nose, made salmon fishcakes with prairie grains and corn-tomato dressing. 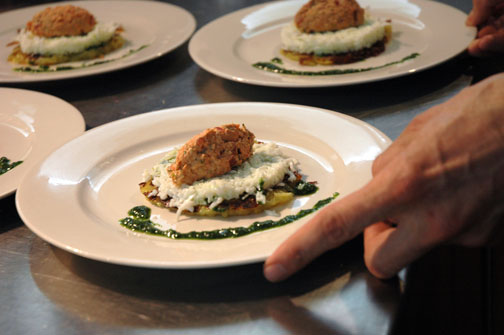 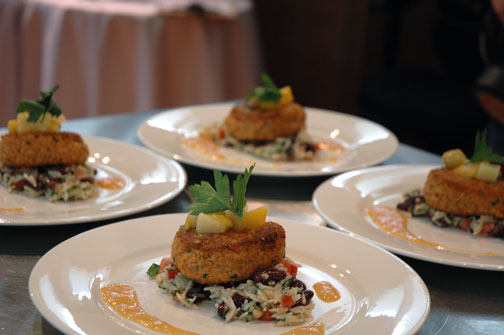 The real winner may have been the food bank, but Gail Nyberg, executive director of Daily Bread, says people shouldn’t have to use food banks. “Poverty is costing our society money,” she says, citing hunger-related health problems as one expense. Food banks are only a stopgap; real solutions might involve job training, housing benefits or increased minimum wage, she says.

Ed Borkowski, executive director of the Ontario Association of Food Banks, spoke to us after the cook-off and agrees that food banks alone cannot solve the problem of hunger in Ontario. He says the Ontario Hunger Report 2010 shows substantially increased numbers of Ontarians relying on food banks over the past decade.

With the election approaching, Nyberg and Borkowski say that if you want to do more than donate to food banks, quiz your political candidates on where they stand and put the issue on your representative’s agenda.