Buying a house on Toronto’s highest hill may not be enough to weather the climate change storm - TRNTO.com
Skip to content 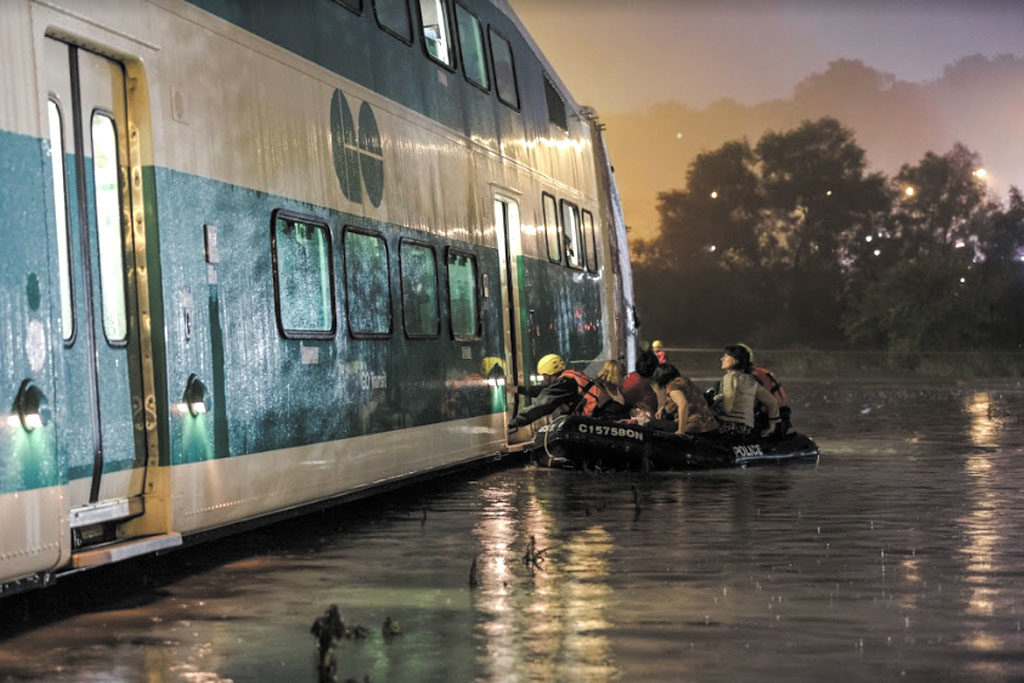 “It’s not a coincidence that I’m an urban planner and I live at a high point in the city. We’re going to  see a significant amount of flooding in the future, and we need fundamentally different infrastructure. But when you’re buying a home, look at the topography of the city. If it’s not at a high point, reconsider. Flooding is going to be a significant issue in the future in this city.”

This comment about the impacts of climate change made by Jennifer Keesmaat at the Post City real estate roundtable at the Rotman School of Business caused a stir in the capacity crowd, there to find out about buying and selling homes.

Although a surprise to some, those in the know have already realized that the impacts of climate change on Toronto homeowners and indeed all residents, will be massive. Just ask Canadian insurance companies, which are already adjusting home insurance rates upwards 5 to 10 per cent as a result of the severe weather that has become the norm.

The dire situation in which we find ourselves has resulted in many municipalities scrambling for answers.

Solutions include climate change policies, like TransformTO, as well as options such as declaring climate change emergencies to initiate serious discussions and concrete planning to mitigate the impending disaster going forward, and even suing big oil companies to recover climate change costs.

“There used to be the 100-year storm, but now we are getting a 100-year storm every three to five years, and the insurance industry started to see that trend before anyone else did,” said Keesmaat, former chief planner of the City of Toronto. “There will be a large impact on land and on homes, especially in flood plains.”

“Cities are on the front lines when it comes to dealing with the costs of climate change,” he said. “We are the ones that are going to have to pay for the increased frequency and severity of storms. Ignoring this problem won’t make it go away, so we need to know what those costs are and explore all options for paying them.”

Greenpeace Canada launched  its own 6ix Reasons to Sue campaign to assist Layton’s motion. Joanne Jenkins, a Davenport Road and Ossington Avenue area resident, tells her story as part of the campaign.

As she recalls in the video, she was driving home during yet another torrential downpour, and her car got swept from the northbound to the southbound traffic lanes. Although she made it out of her car in the nick of time, her vehicle was completely submerged and lost.

The federal government did announce a $2 billion Disaster Mitigation and Adaptation Fund to help homeowners with these very problems.

Earmarked in that plan is basement flooding protection for 2,400 midtown residents with the construction of a relief storm sewer that services an area of over 75 hectares. A similar project was announced in Markham for areas such as the west Thornhill community, which has suffered through similar flooding.

“Like many parts of the world, York Region is experiencing the impacts of a changing climate,” said York Region chairperson and CEO Wayne Emmerson.

These are the costs of climate change and they are already in the billions and rising fast.

Just imagine what the city will look like 20 years from now if nothing is done. And what it will cost.

For example, in 2013 the city was hit with a severe rainstorm in the summer and an ice storm before Christmas. According to Mark Bekkering, manager of policy and research, City of Toronto, Environment and Energy, those two storms alone cost the city $171 million.

“We try to quantify, to show that, if collectively, globally we don’t address the issues of climate change, more severe storms are going to happen and these are the kinds of costs,” he said.

There is also research being done on indirect costs such as public health.

The City of Toronto was thinking about such costs years ago when it developed its TransformTO plan, which unanimously passed through Toronto City Council in 2017.

The goal of TransformTO is an 80 per cent reduction in the 1990 level of greenhouse gas emissions by the year 2050. Bekkering explained that, with funding in place for 43 staff positions to facilitate the work, already the TTC has purchased 60 new electric vehicles, Toronto Community Housing Corp. has retrofit nine buildings, and a program has been set up to provide low-cost loans to homeowners to make their homes more energy efficient.

The plan is the envy of many cities currently scrambling to find solutions such as declaring a climate emergency to help move the needle. Most recently the City of Ottawa has moved one step closer after the city’s environment committee agreed to make the item a priority. Halifax, Vancouver and Kingston have also declared an emergency.

“It gives everyone something to coalesce around and focus on, and that is quite valuable,” Keesmaat said. “There is value if the heart and the action is behind the statement.”

According to Bekkering, there has been talk of making TransformTO’s goal that the city become net zero or carbon neutral by 2050.

Despite what some politicians might think, moving fast to mitigate climate change disasters makes far more economic sense than plunking a few anti–carbon tax stickers on gas pumps and sticking our collective heads in the sand. The consensus appears to be that costs are only going to go up.