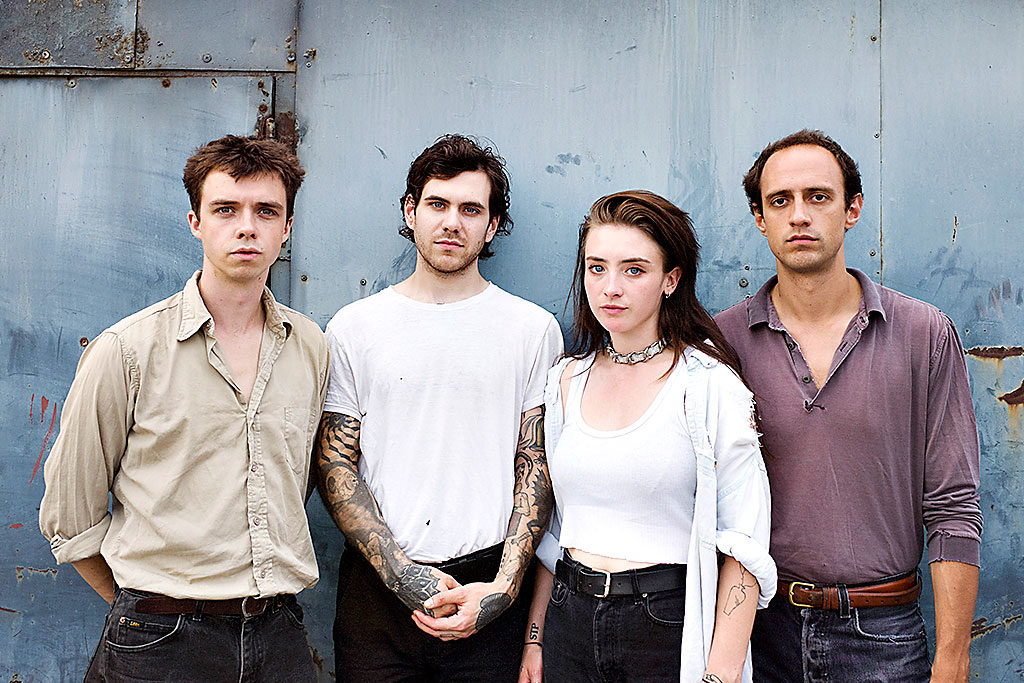 The story of the rise of Frigs is not unlike many band tales from back in the day. A couple of university pals get together to play at a friend’s show. Said band realizes they freakin’ rock. Others tell them so and it begins.

Frigs’s lead singer Bria Salmena met bandmate Duncan Hay Jennings in Montreal while at Concordia University, and they started playing together “not very seriously” in their last year before moving back to Toronto and adding bassist Lucas Savatti and drummer Kris Bowering.

Salmena grew up in Toronto, attending Rosedale Heights School of the Arts, and Hay Jennings and Savatti were at North Toronto Collegiate (Bowering grew up in Nanaimo, B.C.).

“It was a bit of a slow burn,” says Salmena. “It took us a while to figure out exactly what kind of music we wanted to be making.”

But a friend asked them to play a very early Buzz Records showcase, and after that the band wrote the song “Swampy” for an early EP, Dirty Frigs, in 2014 and  garnered a reputation as a band with an epic and intense live show. Soon, the template was set for the sonic adventure to come and led to Frigs recording the band’s debut album.

In Hay Jennings’ apartment, located above an optician in the old Italian neighbourhood on St. Clair Avenue West, the band squirrelled away and, over the course of almost two years, crafted the kind of musical chaos of which  rock dreams are made.

“We were experimenting with different equipment and sounds to see what we could create in that space,” Salmena says. “That was where we recorded, and it was a very special time. The entire apartment was covered in wires.”

The result, Basic Behaviour, was released earlier this year.

Part of what makes Frigs so unique and compelling is the combination of Salmena’s honest and emotional songwriting with the grunge-heavy, anarchic blend of rock punctuated by her vocals that range from gutteral growl at some points to gorgeous singing and soft whispers at others.

“I was trying to mess with my range, and I realized I was able to fluctuate back and forth between screaming, or whatever, and singing naturally or properly,” she says, giving a nod to rock legends such as Patti Smith for inspiration.

It’s likely the biggest step forward for a group long pegged as one of the next big bands from Toronto to break.