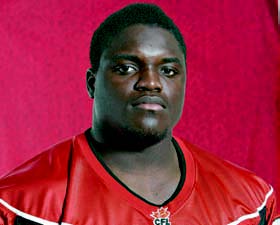 THE BEST CANADIAN player on last year’s Grey Cup–winning Calgary Stampeders team wasn’t much of a football fan, at least not in the early going.

As a high school student at Toronto’s St. Michael’s College, Mike Labinjo’s aspirations were more in keeping with the local drift. “To play for the Toronto Maple Leafs, like most young boys growing up in Canada,” he says, “that was my dream.”

But it was clear to Paul Forbes, senior football coach at St. Mike’s, that Labinjo’s talents were better suited for the football field.

“Right away he was one of the best athletes in the school,” says Forbes. “He was just so coordinated and strong, quick, fast — all the skills to be an elite athlete, he had them all. He could run and catch the ball better than 99 per cent of the other guys his age.”

Forbes arranged games against American high school teams to give U.S. scouts a look at his talented squad. They certainly noticed Labinjo. Then again, a six-foot-oneinch, 225-pound running back (one of the sport’s most swift-of-foot positions) would be hard to miss.

Michigan State University recruited Labinjo, now 28, on scholarship, and he went on to have a standout career as a linebacker, a position better suited to his size. After graduation, Labinjo entered the NFL draft, but his name was never called.

Then, in 2004, the Philadelphia Eagles signed Labinjo, giving him the chance to be a part of the Super Bowl, that year against the New England Patriots.

The Eagles were up at half but let the game slip away, losing 24 to 21. Labinjo then had stints with the Indianapolis Colts and Miami Dolphins but was released following the 2006 season.

This past November, when the Calgary Stampeders faced off against the Montreal Alouettes for the 96th Grey Cup, Labinjo, who signed with the Stamps in July 2007, found himself in the role of veteran.

“It was a reversal this year, where we were the losing team [at half]. I said to the guys, ‘I was in this situation a couple of years ago, and if we can make a couple of big plays and get our offence back on the field, we can win this game.’” They did. The Stampeders, helped by Labinjo’s defensive prowess, held the CFL’s highest scoring offence to just 14 points.

Today, Labinjo is in Calgary preparing for the start of the 2009 CFL season, training with his teammates four times per week — all with the aim of holding high the Grey Cup again this season.