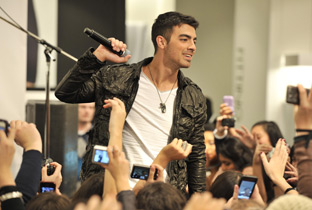 Joe Jonas and thousands of hysterical teens launched the opening of Calvin Klein’s new freestanding store in Toronto last week, located at the Fairview Mall. The Jonas brother in the middle rocked a James Dean-esque look — black leather moto jacket, white V-neck T-shirt and black Calvin Klein jeans – to serenade his fans (well, the lucky first 150 to be let through the shop’s glass doors) with songs from his new solo album, Fastlife.

The exclusive performance was held in-store, which spans over 6,100 square feet, and offers shoppers a full range of men’s and women’s better apparel, jeanswear, underwear and accessories. The newest Calvin Klein retail location is the third to open in Canada this year, having recently launched shops at Marchè Central in Montreal and Heartland Town Centre in Mississauga.

With Calvin Klein’s sight set on British Columbia next, and a plan to open 40 stores across the country over the next five years, there are no signs of slowing down. Hopefully those plans will also include a location closer to downtown Toronto.