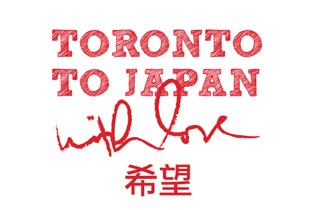 David Suzuki and Naomi Klein are lending their support. So are Margaret Atwood and Michael Ondaatje. Oh, and Adrienne Clarkson and John Ralston Saul. In fact, innumerable Canadian celebrities are coming forward under one roof in Toronto this April for Hope Blossoms, a fundraising show to help relief efforts in Japan.

The show is being put together by Toronto to Japan, a collective of Canadian artists, musicians, writers, business leaders and activists who organize fundraising events for victims of the earthquake and tsunami. We talked to spokesperson and founding member Sang Kim (creator of Blowfish and KOKO! Share Bar). He takes us from Toronto, to Japan, to the big event happening April 21.

Do you remember the first thoughts that went through your mind when you heard about the tsunami and the earthquake?
There is a story in The New Yorker this month by Haruki Murakami, U.F.O. in Kushiro, one that was published in an earlier collection called After The Quake. It tells the story of a man whose wife leaves him inexplicably after sitting numbly in front of the television set all day and night for weeks, watching the aftermath of the 1995 Kobe earthquake. I felt like that woman, numb, as I was sitting in a bar watching the images of the tsunami roll across Sendai.

After the tsunami hit, when and how did the idea for Toronto to Japan come about?
After that experience, I immediately picked up the phone and called Sachiko Murakami, a friend and poet, and she asked me to join a group that was meeting that week. It was at Joy Kogawa‘s home. I was asked to chair the meeting. The idea [for Toronto to Japan] came to us at the meeting. It is a dynamic group of people, across generations, genders, vocations and ethnic backgrounds. We wanted the collective to reflect a local response to what was happening in Japan. We also felt that the preposition "to" in Toronto To Japan reflected direction and equality, as opposed to "from," which could suggest pity, condescension.

Was it easy to garner support from writers, activists, musicians and artists across the city?
Very easy. With people like Kerri Sakamoto, Kyo Maclear and Joy Kogawa on the collective, reaching out to artists, especially writers, was easy. The first two to come on board was John Ralston Saul and Margaret Atwood. Others quickly followed suit. Now, we have Margaret Atwood, Michael Ondaatje, Adrienne Clarkson, and Bob Wiseman performing at our main event on April 21.

What do you hope to accomplish with Toronto to Japan?
We hope to raise as much money as we can and send it to the areas that have been most affected. We also want to send our support and solidarity to the Japanese people. We have launched a very effective viral campaign, called "Toronto To Japan, with love…" which are short and sweet video messages of love to the survivors. People from all walks of life, from all areas of this city, and soon around the world, are joining us in this campaign.

What words of advice do you have for Torontonians who are on the fence about helping with relief efforts?
The fable of the hummingbird. A fire rages in the forest. The bears wake from their slumber and line up from the banks of the river to the fire, passing buckets full of water to each other. A hummingbird flits back and forth, irritating the bears. One of the bears finally stops the hummingbird in mid-flight, saying angrily, "What do you think you are doing?" The hummingbird spits it’s drop of water out of its beak and replies "I am doing what I can." Members of Toronto To Japan are doing what we can.