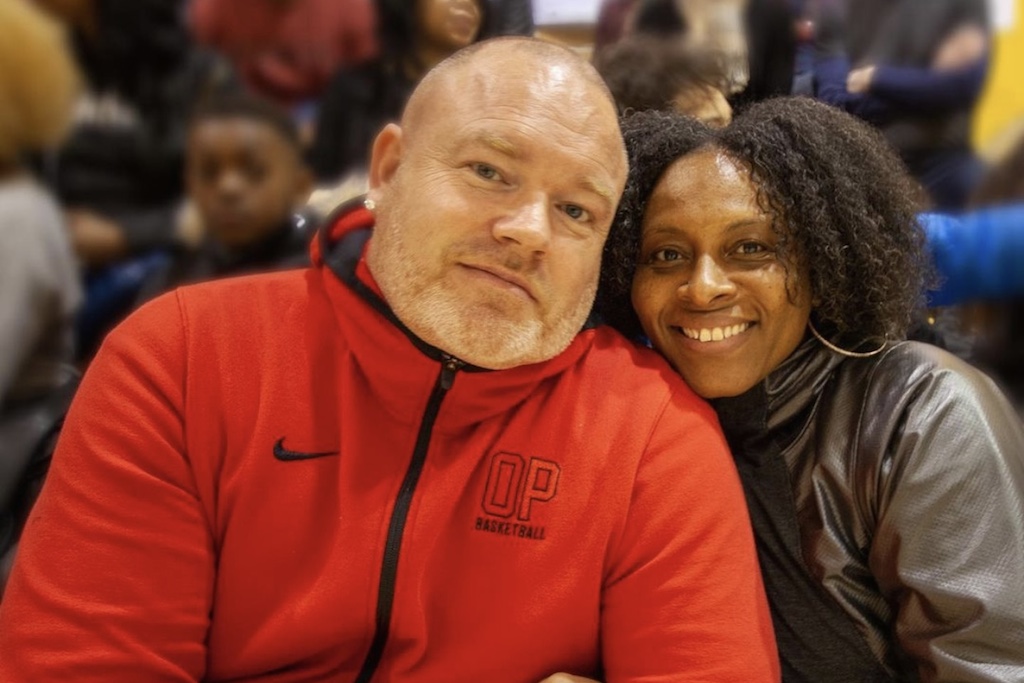 It’s no secret that Ontario has been churning out NBA stars in the last few years. A new CBC docu-series this month called Anyone’s Game is highlighting one of the world’s top basketball development programs right here in Ontario, where many of these stars are getting their start: Orangeville Prep.

The series follows the high school players in the 2019-20 team as they hope to follow in the footsteps of dozens of graduates before them and receive NCAA Division 1 scholarships. At the centre of the team is coach Tony McIntyre. He is admired and respected in the world of high school basketball and along with his wife Suzette, he cares for the players as if they’re his own kids.

Not to mention, he and Suzette also have seven basketball playing kids of their own, one of which is Tyler Ennis who played at Syracuse University and was drafted in the NBA first round in 2014. Here Suzette tells the story of how this basketball family came to be.

We met at Humber College Lakeshore in Toronto. Tony was taking law enforcement and I was taking social services. I had seen him several times walking in the school and thought he was cute. I actually saw him like a scene out of a movie across a crowded room. We then ran into each other by coincidence at a nightclub in downtown Toronto. We talked and exchanged numbers and started talking on the phone.

Our first date was to Red Lobster for dinner. It was a nice dinner and seems to have previewed the future as we spend a lot of time in restaurants. We also went to a club with some friends to go dancing that night and a fight broke out. Tony and I decided to walk two hours back to Tony’s house to get his car to drive me home. It was a great opportunity to get to know each other better.

The proposal was both expected and unexpected. We had been talking about it, but the time and place was unexpected. One of our favourite restaurants was Olive Garden. We went for a nice dinner and I had  left to go to the washroom and came back and saw a ring on the table. That’s when Tony asked me to marry him. I was shocked and happy all at the same time.

We got married on July 27, 1996 at the Brampton Baptist Church in downtown Brampton. We had all of our family and friends at the ceremony and the reception. We left for our honeymoon the very next day. We flew to California to go on a seven-day Carnival Cruise through Mexico. Everything was amazing until three hours into the cruise when we had an emergency on the ship. We all had to go to our muster stations and wait. While waiting the captain announced that there had been a report of a bomb on our ship. It was obviously scary and even more real being that a bomb had gone off at the Atlanta Olympic Games the day before. We returned to shore safely and the police and the bomb squad checked the ship. Based on our feelings we decided to not get back on the ship. We stayed at my aunt’s house in California for a couple of days instead and then spent the rest of the honeymoon in Las Vegas.

It’s been very hectic in our lives balancing our careers, our marriage and our seven children. We always made a master schedule of events and split up to get everything done each day. We would try our best to rotate tasks so none of our children felt that they were not supported equally. Tony coaches basketball so it also made things even more difficult at times, but also easier at times in which he was coaching our children. Balance was key and although we didn’t make a lot of time for each other we knew it was a commitment to our children that we were making the sacrifice for. We now spend a lot more time having date nights and dinners with each other or going to the movies when we can.

We both love to drive and travel. We plan road trips and try to make the most of basketball tournament trips to see the areas we travel to. We also recently took up plants. It was weird, we both felt the need to have plants in the house at the same time. He loves different palm trees and cactus plants and I love snake plants and common house plants. The plants make our house feel so much more lively and welcome. Tony actually talks to them and plays music for them.

Our secret of success has been God, love, compromise, patience, self-sacrifice and the vision of the bigger picture.

For Tony, it would be sand, beaches, boats and beers. For me, I imagine life after retirement filled with travel, visiting our children, watching our grandchildren play and grow up.

All six episodes of Anyone’s Game will be available to stream on CBC Gem beginning Jan. 15.