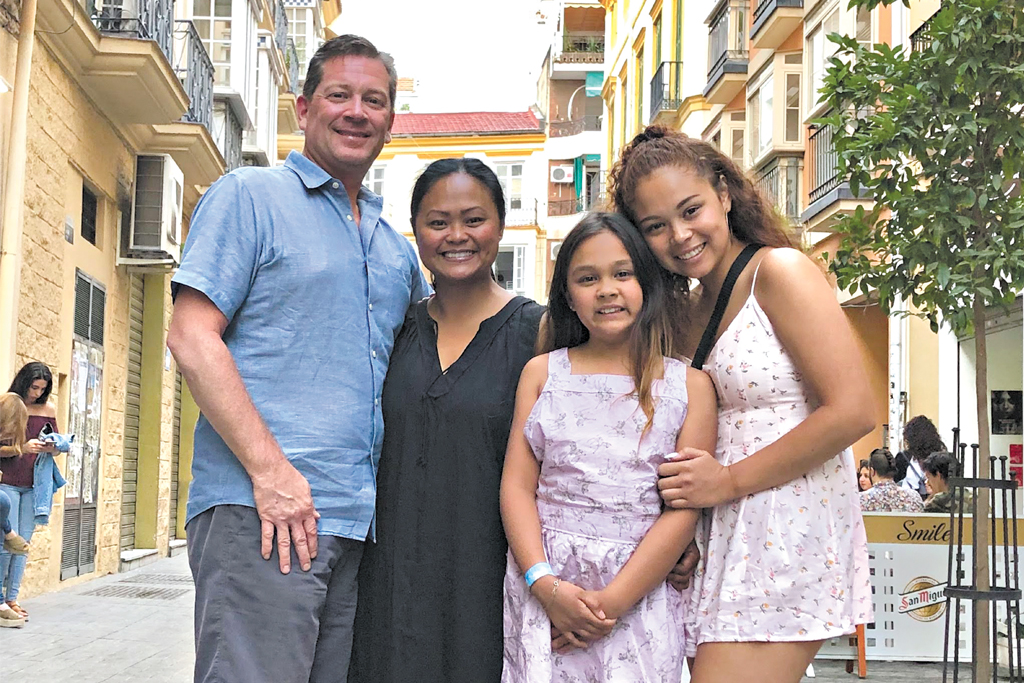 CBC News anchor Marivel Taruc met her husband Trevor Pilling while they were both working at CBC Manitoba. They bonded over a love of sports, and as she went on to become the weekend anchor of CBC Toronto News, he became the director of news and highlights at Olympic Broadcasting Services. Here is how they met.

I was working as a reporter at CBC Manitoba in my hometown of Winnipeg in 1994. A new associate producer came up to me and introduced himself: “Hi, I’m Trevor.” We were the youngest people in our newsroom. I wouldn’t say it was love at first sight for either of us. I will say he had these amazing blue eyes that I tried very hard not to stare into.

Our first date happened a few weeks after we met, around the holidays. We went to a wonderful Italian restaurant called Civita in Winnipeg. One thing I’ll never forget was talking about our goals and dreams. Mine was to become a CBC News anchor, which I’ve been blessed to accomplish. Trevor told me he wanted to work on Hockey Night in Canada someday. And a few years later, he became the executive producer of that show.

One of the most memorable things about our courtship was that we worked in a newsroom together but kept our relationship very private. Our colleagues and friends were among the best journalists in the country and had no idea we were dating until about six months in. We’re also both competitive. We had some memorable games of horse on the basketball court — I mostly let him win.

The proposal wasn’t a complete surprise to me. We had already gone shopping for a ring. Trevor asked me to marry him in our apartment on Dovercourt Road in December of 2000. Our beloved chocolate lab Coco stood by for moral support.

We got married in August of 2001 in Winnipeg. Our first daughter, Maia, was four months old at the wedding, and she got to walk (was carried) down the aisle with us. She definitely stole the show. We wouldn’t have it any other way. We went on our honeymoon a year later to Italy (minus Maia). It was a glorious two weeks of travelling through Rome, Tuscany and the Italian Riviera. We took a day trip to the south of France to see how the rich and famous live. From the sublime to the ridiculous, we capped off the visit by eating at a McDonald’s in Cannes. Vive le MacPoulet et frites!

Our second daughter, Callie, was born in June 2010. She’s nine years younger than her big sister, Maia. Such a big age gap comes with many bonuses including having an instant babysitter, teacher and cool authority figure in the house.

That is the million dollar question, isn’t it? We were blessed to have my parents around to help us. My mom and dad were retired and made it part of their retirement plan to help take care of the grandkids. That was especially valuable in the years when I worked on weekends and late nights and when Trevor worked for CBC Sports covering Olympic Games, CFL football and Hockey Night in Canada to name a few.

We live in Leslieville. We bought our Victorian semi-detached house in 2001 and moved in two weeks before I gave birth to Maia. It was supposed to be our starter home, but we fell in love with Leslieville right away. Because of its proximity to work, the beach and downtown, it’s the best of all worlds. And it’s been a wonderful neighbourhood to raise our kids.