Celeb chef Lynn Crawford is in it to win it | TRNTO.com
Skip to content 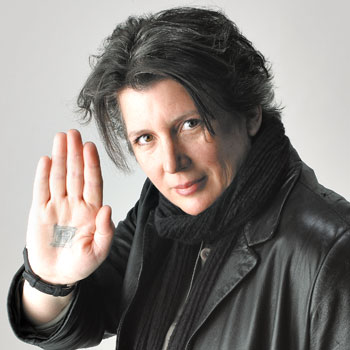 Earlier this year, avid fans of Lynn Crawford’s Riverdale restaurant, Ruby Watchco, had to go without their prix fixe fix. The doors to the eastside eatery were temporarily closed while Crawford ventured to the States (with sous Lora Kirk in tow).

The purpose of Crawford’s cross-border mission? To throw her apron in the ring and vie for the coveted title of Top Chef Master. Top Chef Masters pits some of the world’s best chefs (Rick Bayless, Chris Cosentino, Floyd Cardoz) against each other in an epic 10-episode marathon of cooking challenges that demands both creativity and poise under pressure.

Based on the moxie Crawford has displayed on her rough-and-tumble show Pitchin’ In, this homegrown chef has shown that she has what it takes to win the fifth season of Top Chef Masters.

She’s not one to shrink from a challenge, whether it’s mucking out the trout tank, catching (surprisingly sneaky) pheasants or harvesting onions.

Crawford is the second Canadian and first Canadian woman to compete on Top Chef Masters.

Not only is the title of Top Chef Master up for grabs, but the 13 contestants are also competing to win $100,000 for the charity of their choice. Crawford and Kirk are cooking to raise money for the Odette Cancer Centre at Sunnybrook Health Sciences Centre.

“Our dear friend Ross passed away from kidney cancer, so we wanted to give back to the Odette Centre. Our good intentions were to heighten awareness about the work that they’re doing there and to raise some money, and we certainly did that,” says Crawford.

Crawford’s no stranger to cooking competitions. Not only has she judged high-stakes culinary challenges (she was a guest judge on Top Chef Canada), but she’s also flexed her knife skills and competed in a few cook-offs herself.

Six years ago, she battled Bobby Flay in Kitchen Stadium for the title of Iron Chef (unfortunately, she didn’t win battle peanut).

She has also competed in the annual Toronto fundraiser Chef’s Challenge, which raises money for breast and ovarian cancer research at Mount Sinai.

Before battling Bobby Flay in Kitchen Stadium, Crawford prepared by having mock battles in her kitchen (she was working as the executive chef of the Four Seasons New York at the time).

This time around Crawford didn’t prep for the challenge, but she’s quick to point out that her lack of preparation doesn’t stem from overconfidence.

For three consecutive years Crawford has taken part in Toronto’s Chef’s Challenge. The fundraiser is modelled on Iron Chef. In front of a live audience of diners, celebrity chefs (Mark McEwan, Chuck Hughes and Michael Smith, among others) coach teams of philanthropists through three rounds of cooking battles. Crawford has won the coveted Iron Whisk Trophy two out of the three years she’s competed.

When I asked him what his impressions were of Crawford, he told me that she was like his “sister from another mister.”

Although I’m not sure Crawford agrees with the simile, Fieri was astute in noting that Crawford is no shrinking violet.

Having her represent Canada on an internationally broadcast TV show is sure to help dispel the misconception that Canadians are bunch of deferential maple syrup guzzlers.

You wouldn’t expect this brassy, booze-loving, tattooed lady to have been raised in swanky Richmond Hill.

“Richmond Hill was a totally different place when I was growing up there,” says Crawford, who remembers Richmond Hill as cornfields, not Starbuckses and posh shopping boulevards.

Crawford, the oldest of two siblings, was born in Willowdale, Ont., and moved to Richmond Hill just in time to start high school at Richmond Hill High School. When I ask her about Richmond Hill, she hems and haws for a while, “It was all so long ago,” she tells me.

Prying memories and dates from the celebrity chef is more difficult than opening an oyster with a butter knife, which may explain the brevity of her Wikipedia page, which is markedly short in content.

Crawford has starred on two television shows, was the first female executive chef of the Four Seasons worldwide, published one (soon two) cookbooks, and owns both a restaurant and a pantry (Ruby Eats, which is next door to her restaurant Ruby Watchco), and the Internet has mustered a stingy 182 words for the chef. Animated TV characters have longer Wikipedia pages.

When I ask her to tell me about her favourite place in Richmond Hill she issues forth with a short, impressionistic series of memories that have clung to her for decades.

“My brother and I used to go to the Richmond Hill Golf Club, and we used to caddy on Saturday mornings, get up bright and early,” she notes.

“We used to go the Mill Pond, to the playgrounds there. I remember getting my driver’s licence when I was 16 and touring the small streets of Richmond Hill back in the day. Good times, you know?”

After graduating from high school, Crawford studied art at Guelph University, but somewhere along the way she left the paintbrush for the basting brush. When exactly was that? She can’t remember.

The career path change was perhaps a natural choice, considering Crawford comes from a food background.

When her father immigrated to Canada from Scotland, he began his new Canadian life as a butcher. (She wouldn’t share more about her father; although, he did leave his  butchering profession.)

Although we won’t know how Crawford fared on Top Chef Masters until the show airs (later in July 2013), she did spill that she and Kirk had managed to raise money and awareness for their charity. Forecasters and gamblers take from that what you will.