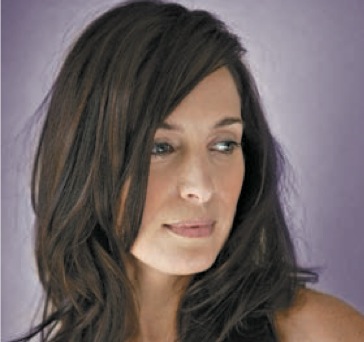 “I’ve always claimed it’s had a huge impact on the brain and that any kind of language you can expose your child to at a really young age is going to be invaluable,” says Kreviazuk. Now that I have kids, I get to see it in action.”

Kreviazuk believes her own early exposure to music has been the most significant contributing factor in making her who she is today — that is to say, a Juno Award–winning star who has been putting out hits for more than a decade. And it all started in Winnipeg, with her massive Ukrainian family.

“Sundays were spent at my grandparents’ farmhouse with their 12 children and their grandchildren all singing hymns,” she says, describing the scene. “People would come with homemade instruments and entertain themselves by playing music. It was normal to watch my grandparents play the fiddle and the mouth harp together. Now I think back and it blows me away. It affected me in a big way, the most obvious direct impact being I have an amazing ear for music.”

In addition to being a singer, Kreviazuk is a classically trained pianist who also plays guitar. And she started incredibly young. By age three, her little hands were already making friends with the piano. Something of a prodigy, Kreviazuk enhanced her natural abilities with regimented classical piano lessons throughout her youth and into college.

From family jams to performing musical theatre at school and hanging out with older cousins listening to classic rockers like The Guess Who, The Rolling Stones and Elton John, Kreviazuk was exposed to a wide variety of music. But the key that unlocked it all for her was classical training. Years and years of classical training. And she can’t emphasize the importance of those years enough.

“If you have a good ear, that’s wonderful,” she says, “but only by being given a technical background are you going to be able to see the manifestations of your capabilities. Imagine the technical skills you gain by having to do scales for years or having to read music or having the hand- eye co-ordination of reading and playing out what you’re seeing. It’s one thing to be able to feel out chords, but to actually know an entire language around music is a gift.” A gift that comes with training and hard work.

Kreviazuk’s passion for music education is now being passed on to her three young sons — Rowan, aged five; Lucca, aged four; and little Salvador, who is nearly a year old. She intends to give her boys the same balanced exposure she enjoyed as a child, and she tries to incorporate music into their everyday lives. Every day, for example, she and her husband (Raine Maida, vocalist and co-founder of the popular rock band Our Lady Peace) make a point of singing to them. “Anytime I think of something I want to say to them, I think of a song to sing.”

Just as her parents did for her, Kreviazuk also wants to give her children a structured music education. “Of course they’ll get all the unconventional lessons by being exposed to tons of music at home — I assume their ears will be phenomenal. However, the
discipline of a classical background — even a few years — is invaluable.”

That said, Kreviazuk doesn’t necessarily want them to follow in her musical footsteps. Her reasons for musical training are connected to the growing research that links music with brain development. She’s read that we can take on more intelligent or sophisticated concepts when listening to classical music. She also found studies that show people who grow up around music are able to use both hemispheres of their brains more easily because of the way the brain is triggered. “I think you’re just massaging so many parts of your brain. It’s very magical and spiritual and logical.”

Wise words spoken from a woman who loves music. And she has the brains to prove it.