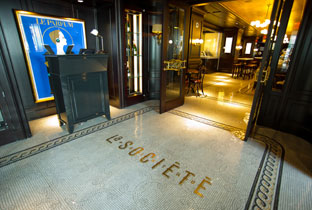 Toronto’s entertainment king Charles Khabouth threw a lavish party last night to celebrate the opening of his latest venture, La Société. Before it opened its doors to Toronto’s most stylish (we spotted Greta Constantine’s Kirk Pickersgill, National Post’s Shinan Govani and Fashion editor-in-chief Bernadette Morra, to name a few), we caught up with Khabouth and partner Danny Soberano on the sunny patio.

Describe the concept behind the new restaurant.
Khabouth: Well, to start with, I was thinking of how expensive the rents are on Bloor and how we’d need a restaurant that could operate seven days a week in order to make sense, and also that would be open for breakfast, lunch and dinner, and brunch on the weekends. There are only a few concepts that you can do all day long and French was one of them.

I also grew up in Lebanon, a French colony, so I grew up with bistros and brasseries on every corner, just like Starbucks in Toronto. So I grew up eating the food, understanding the culture. I grew up seeing the decor and I was always inspired by it. I love Paris, it’s one of my favourite cities in the world. I love the energy.

And there aren’t that many French bistros in Toronto. There are a few and there are a few good ones, but not enough. If you think of Italian food or Greek food, there’s like tons everywhere.

How important was it for you to create an authentic French experience as opposed to a North American version of the French experience?
Khabouth: It was really important for me to stay as authentic as possible, because when you mix and confuse things, then you confuse people. We wanted everything to be authentic, from the food to the interior, and we went as far as searching for three months to find the right company to do our stained-glass ceiling. We had to fly in people from Montreal and Quebec to do the mosaic floors. We ended up with 29 people working on the floors. The zinc bar top was done in France.

Soberano: We went to Paris a few times to do our research.

Any particular restaurants in Paris that inspired yours?
Khabouth: La Fontaine de Mars. That was a big one for us.

Soberano: It’s not traditional French food, which is what we are doing here.

What are your favourite items from the menu here?
Soberano: Dover sole almondine is my favourite.

Khabouth: That’s a very French dish. I love croque-monsieur sandwiches. Very few people in Toronto do them or do them well. And the steak frites. Some of the items are in other restaurants, but we make sure they are very authentic and well done. One-third of the kitchen staff is French. I guess they were attracted to the idea of working in a brasserie. When you walk through the kitchen you hear a lot of French accents.

Soberano: They understand the flavours and ingredients we’re looking for. It’s important for us to hire people who are not only phenomenal chefs, but also know the original flavours.

Your focus seems to be shifting from clubs to restaurants now.
Khabouth: I look more at the opportunity, so if this was an incredible location for a club I would have done it. However, we are expanding definitely on our restaurant end. You could say we’re focusing — not more — but we’re giving as much focus now to the restaurants as we have to clubs in the past.

Do you think that food is more central to Toronto’s nightlife now than it used to be?
Soberano: I think people want a full experience, so we provide the restaurants and nightclubs, so that they can have a great dinner and then continue the night at one of our clubs. We’re trying to offer what’s needed. There was definitely a need for a great café-patio on Bloor Street. There’s not as much happening on Bloor Street itself.

Khabouth: Once the shopping shuts down at six, the street shuts down itself. So we’re really taking a gamble, because this restaurant will have to become a destination after seven o’clock, because the street will be empty.

Soberano: But not tonight!

And you have two other restaurants in the works as well?
Soberano: Yes, they’ll be open before the year is out.

What will their focus be?
Soberano: One is a gastro-pub, because I also think there is a lack of that in the city. And the other is a Spanish-Mexican combination. There aren’t that many Mexican or Spanish restaurants in the city that have a modern flavour. You’ll find these authentic little restaurants with 40 seats but there isn’t the experience of what you’ll find in New York or Chicago.

Where will they be located?
Soberano: Both will be in the same building. King and Spadina. We can offer the customers a variety of dining experiences in one building.

So what is the experience you want your patrons to have when they come here to La Société for dinner or drinks?
Khabouth: For me it’s a causal but fulfilling experience, where you get a great meal, but you’re not over-charged. It’s important to me that our pricing stays inexpensive. The experience has to be great: great service, great food, great energy. And I don’t want it to become a place where you go for your birthday only. There are a lot of restaurants like that, but we want it to be more of a staple, more of a place you stop by anytime.

Soberano: We want people to come back again and again. 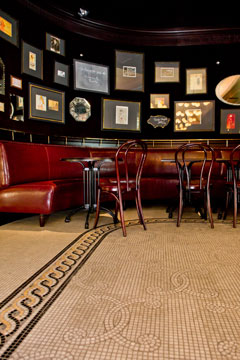 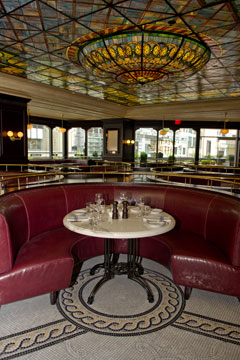