Chef Eric Wood is heading up the kitchen at The Beverley, an upcoming hotel and restaurant on Queen West | TRNTO.com
Skip to content 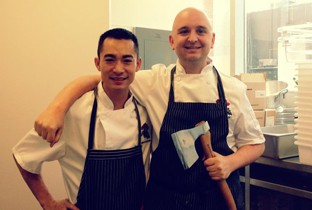 Last month, chef Eric Wood announced that he was leaving Hawthorne Food and Drink to work at an upcoming “boutique hotel” on Queen West, the name of which he did not reveal at the time. Well, if a recent job posting on Craiglist is any indication, he’s now heading up the kitchen at The Beverley Hotel, a new venue that’s opening up on Queen West.

We got in touch with Wood to find out more, but he indicated he wasn’t at liberty to communicate further details about the hotel. But another Craigslist ad, along with a liquor licence application, reveals more. The venue will be located at 335 Queen West, and it will have a 70-seat restaurant and lounge, a 20-person private dining area, a 70-person rooftop patio and 18 hotel rooms. According to the Globe, architect Steven Fong is affiliated with the project.

Back in April, when Wood announced his departure from Hawthorne, he hinted that the upcoming hotel would be opening in mid-May, so we’re hopeful that the venue will be open soon.