Chomsky vs. Chimpsky: comparing a famous professor — speaking in Toronto tonight — and a famous chimpanzee | TRNTO.com
Skip to content 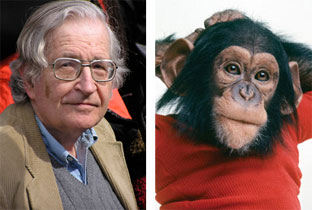 Noam Chomsky, famed MIT professor of linguistics and outspoken political activist, is speaking at the University of Toronto tonight and tomorrow. Nim Chimpsky, the first chimpanzee to be taught American sign language, is the subject of Project Nim, a film screening at the upcoming Hot Docs. Going by DNA alone, Chomsky and Chimpsky are 98.7 per cent identical, but we thought it would be a good time to compare legacies.

Chomsky: author of around 150 books, including Language and Politics, Chomsky on Democracy and Education and Failed States: The Abuse of Power and the Assault on Democracy
Chimpsky: co-author of a play to be called Hamlet (unfinished)

Chomsky: “Human language appears to be a unique phenomenon, without significant analogue in the animal world.”
Chimpsky: “Nut nim nut.”