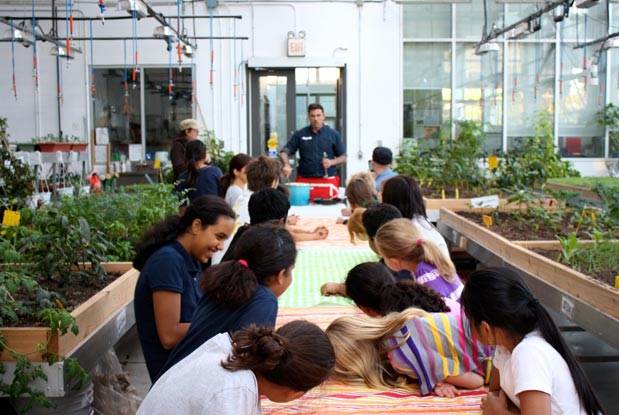 Food Network hunk Chuck Hughes swung by Wychwood Barns yesterday to teach an excited group of whippersnappers how to make pumpkin-pear soup. The kids, participants in The Stop’s after-school program, were bouncing with excitement, so when Hughes opened the floor up for questions, he was inundated:

Hughes has teamed up with luxury cookware manufacturer Le Creuset to raise money for Community Food Centres Canada (CFCC), which has embarked on an ambitious plan to open 15 nationwide centres modelled on Toronto’s The Stop. Le Creuset, which is furnishing all 15 centres with cookware, is amping up its support for the CFCC through the sale of gift sets (which come with three multi-coloured mini-cocottes, along with five Chuck Hughes recipes). All profits from the $80 gift sets will be donated to the CFCC.

The jazzed group of ankle-biters could not have cared less about enamelled cast iron cookware. They were more excited to show off their knife skills for the tattooed celeb chef, who had the most skilled of the group cutting pears brunoise. Even kids understand the importance of a pretty garnish; one particular perfectionist was standing at her station long after her fellow cooks had trooped off to watch Hughes man the wood-fired ovens.

Hughes told us that his girlfriend is pregnant with their first child (they’ll open an envelope that discloses the child’s sex at Christmas). And after hanging out with Hughes and a gaggle of kiddies, we expect he’ll be an excellent pop. He was responsible, jumping from group to group, making sure that the older kids didn’t lose a finger and that the youngest of the crew felt involved (they got to gut gourds and peel garlic).

But, we doubt he’ll be a helicopter parent — he did gift a group of older boys a completely burnt pumpkin to play with. And, of course, the boys insisted they all had to try the crispy, blackened gourd, much to their puckering, face-shaking chagrin.

Hughes also told us that he’s once again contemplating a Toronto restaurant, but it’s space dependent. He’s fallen in love with a Baldwin Village spot, and should lease negotiations fall through, no Hughes for us. (At least not in the immediate future.)