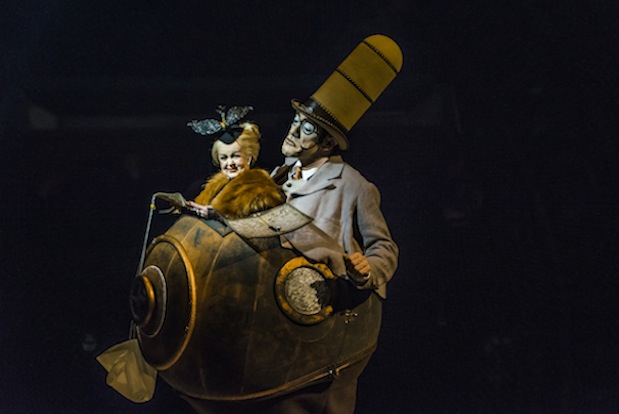 There are two feelings that are likely to arise during the course of a performance of the incomparable Cirque du Soleil. One, even if you are in decent shape, you will still feel woefully inadequate after witnessing the mammoth feats of strength and flexibility on the stage. Two, their creativity knows no bounds, and it is a special experience to inhabit such a world, even temporarily.

Kurios, the Montreal-based circus company’s new show running in Toronto until Oct. 26, is one of the least spectacular shows in recent memory. And, that’s not a criticism. Although there appears to be fewer big budget numbers and one or two fewer “No way, she did not just do that” moments, there is more variety and certainly more creativity in the choices and execution resulting in a much more consistent and moving experience.

The aesthetic of Kurios is decidedly steam punk, a sub-genre of science fiction that is kind of old timey in a mechanical, Industrial Revolution sense of the word. So, early or completely fictional inventions abound, steam and trains and iron are used often and to dramatic effect, and there is an otherworldly sense to the show with weird and wonderful costumes and dark or tarnished steel props and sets. If there was such a thing as retro future, well, that might apply here.

For instance, one of the hosts of the show has a steel submarine/living chamber kinda thing as a stomach and at one point during the show. He opens up the door to reveal a little person living inside who then appears throughout the evening. It’s priceless and it’s brilliant.

Like every Cirque show there is a plot, but it is hard to pay attention to any such notions amidst such a dizzying flurry of activity. Something involving a clock, dude has a dream creating this mechanical wonderland in his head, then he wakes up…basically.

Highlights of the evening include an acrobatic display from Anne Weissbecker who makes things difficult for herself by performing her routine atop a flying bicycle. The feats of strength include the Russian Cradle Duo early in the show with an act that consists of a very strong man swinging a woman back and forth between his legs from an elevated platform then tossing her up in the air while she flips and twists and ends up landing on this shoulders or chest. Impressive. Even more so, the big showstopper at the end, Banquine, features a  team of performers that do a similar thing in that they fling people very high in the air and after a few flips and turns land on the shoulders of someone else. The big finish, one guy gets thrown up to the shoulders of another who is part of the three-person tower. It’s mind boggling.

Three of the more unique and enchanting parts of the show have little to do with strength or contorting of the body. One comes courtesy of one of show’s clowns. This is the audience-participation part of the evening that sees the clown select a certain lovely lady from the crowd to bring on stage for a little dating skit that involves a dinosaur, a cat and a bird. Much hilarity ensues. In another sketch, a simple overhead projector, a hot air balloon and a pair of bare hands provide a marvelous and entertaining spectacle. But, the clincher is an upside down dinner party involving a fine display of strength and balance, but the brilliant twist is just too good. I wouldn’t want to spoil the fun.

Cirque du Soleil’s Kurios runs at the Grand Chapiteau at the corner of Cherry and Commissioners until Oct. 26.