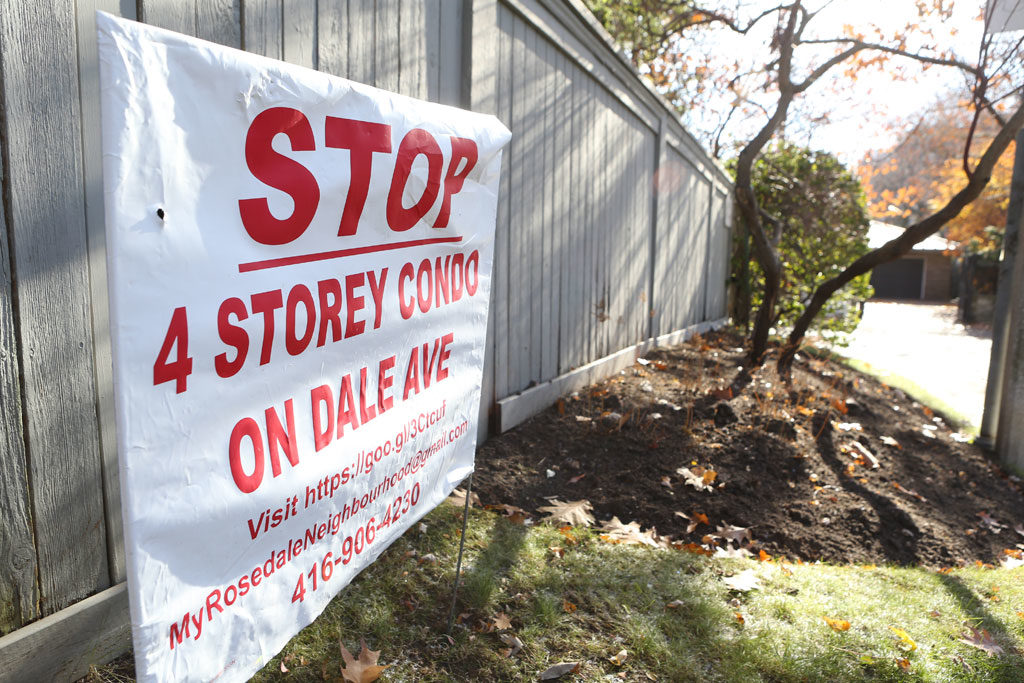 The future of a controversial development application to demolish a heritage property in order to build a modern condo building at the site of 5, 7 and 9 Dale Ave., in the South Rosedale Heritage Conservation District, is closer to being decided.

The property at 7 Dale Ave., one of three bungalows up for demolition, was built between 1944 and 1945 by prominent Toronto architect Gordon Adamson. In August 2016, an application was submitted to the city for a four-storey condo at this site by Vista Platinum, a real estate developer.

A new residents group, My Rosedale Neighbourhood (MRN), was formed to help protect 7 Dale Ave. and lobby for the City of Toronto to upgrade the home’s heritage designation from a category C to B, to elevate it to a property of citywide significance. According to heritage conservation district (HCD) bylaws, a category C building can be demolished if its proposed replacement is equally, or more, consistent with the heritage character of the district.

Separate reports from City of Toronto, Planning staff as well as the Heritage Preservation Services (HPS) opposed the demolition of the building, based on the initial development plans.

The last time Toronto City Council deliberated on this property was in July, when it was revealed a new settlement proposal, ahead of a possible Local Planning Appeal Tribunal hearing, was being negotiated between staff and the developer.

“There is no question among all the experts that 7 Dale has significant heritage value.”

New plans were resubmitted by the developer, which planning staff deemed satisfactory. The adjusted plans include reusing existing paving materials and retaining certain heritage characteristics, as well as increasing setbacks.

“The settlement offer responds to the concerns raised by HPS and satisfies the guidelines regarding the demolition of the three Category ‘C’ buildings,” states the report.

Staff identified similar buildings built along Dale Avenue, which justified the height of the proposal.

“HPS staff have concluded that the demolition of 5, 7 and 9 Dale Avenue and the replacement building are acceptable,” the report states.

“We were obviously very disappointed especially because there is no question among all the experts that 7 Dale has significant heritage value,” said Kathy Lee, founder of MRN.

City council will vote on whether to support negotiations toward the settlement when it returns in December.

Vista Platinum did not respond to requests for comment.