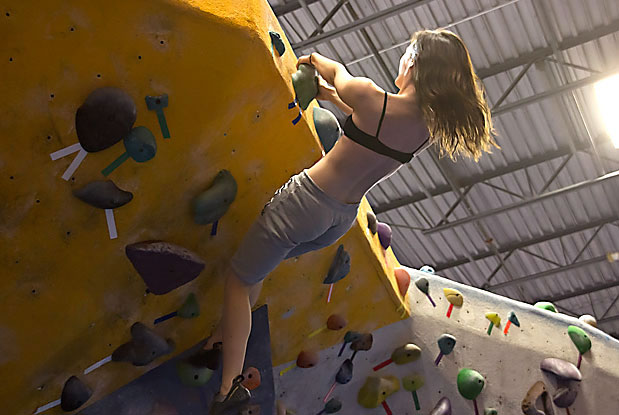 At risk of being hyperbolic, every workout should be an adventure. No, really! There are so many ways to take your workout beyond the confines of four traditional walls, so why not try indoor climbing?

Though climbing is more popular than ever, many of Toronto’s gyms have been around for decades and have seen countless climbers—from complete beginners to the world’s elite—pass through their doors.

Whether you’re interested in top-roping (the endurance-building practice of scaling a wall while secured by a rope managed by your climbing partner) or bouldering (the practice of solving intricate climbing problems on shorter walls), climbing is a total body workout.

It’s a huge misconception that climbing is all about the arms. To the untrained climber, a route may look like it’s best completed by a series of pull-ups. But whether on top rope or boulder, climbing is about using your whole body — placing your hands, feet and sometimes other parts (you can even use your face on some tricky routes) on the exact coordinates of the wall to send yourself upward with minimal force. While climbing undoubtedly builds strength, it also builds grace, precision, footwork and, most importantly, self-confidence.

The five biggest climbing gyms in Toronto each have something special to offer—find one in your neighbourhood.

The good: It boasts a huge variety of climbing areas, different kinds of walls including two crack walls and a really cool stalactite you can scale. True North also features a wide array of yoga and technique classes, so there’s more than just climbing here.

The bad: It’s easy to feel bored at True North—routes and problems don’t change up all that often. The boulder is also very crowded and consists almost entirely of overhang.

The bottom line: For serious climbers, especially serious top-ropers, this is the place to be. True North is the perfect place to go train hard and discover new techniques and learn tricks of the trade from some of the city’s top climbers.

The good: A large and inviting club, Toronto Climbing Academy also features a large variety of climbing areas. They change up their routes and problems often and do so in chunks rather than all at once, so you never feel bored. It’s also a very beginner-friendly club, with instructors and employees who instantly make you feel like part of the family.

The bad: This isn’t the place to go for “extras.” You won’t find nightly yoga classes, a ton of merchandise, or slack lines here. The back wall and the main arch is also almost entirely lead-only, which means beginner climbers are losing out on some of the most attractive walls in the club.

The bottom line: Perhaps the best place to go on a social level, TCA has a distinct “community” feel. Possibly the most “beginner-friendly” gym in Toronto.

The good: This place just looks amazing. The sprawling, warehouse-style setting features some crazy overhang and bright windows that, no word of a lie, make you feel like you’re climbing into heaven. There’s also not one but two huge boulder areas and a separate room of lower-grade top-roping routes so beginners can climb without distractions or intimidation.

The bad: The walls don’t feel well-utilized enough—there are hardly any routes on each section, which means there are often line-ups at every rope. The top ropes are fed through two carabiners, not around a drum, so if you and your partner have a significant weight difference you’re in for a tough ride. Plus, it’s one of the more expensive gyms, with no free parking nearby.

The bottom line: Joe Rockhead’s is not unlike any other place in Liberty Village—beautiful to look at, a little pricey, and not the most personable. But those who like it love it, and if anything, you have to try their boulders at least once.

The good: They offer one of the best value day passes in the city ($15) and are the only Toronto gym to feature auto-belays, so you can top rope without a partner. It’s by far the most central location, and like TCA boasts an open and friendly atmosphere. They change up their routes pretty often, and there’s a ton of beginner-friendly routes.

The bad: Like Rockhead’s, it’s quite crowded, and some may feel uncomfortable with the co-ed change room. The speakers seem to be playing a constant loop of ’90s throwbacks, which might actually be a good thing if it weren’t so loud.

The bottom line: This place is good for an actual climb, but the crowds are definitely a major drawback. Make the drive into the suburbs if you find the idea of learning something new while surrounded by strangers intimidating.

The good: The boulders, of course! This place is all about the short walls. It’s kid-friendly and even features a slide off of one of their boulders. There’s also good workout space, with free weights, hold bars and system boards to build your technique and strength.

The bad: If you’re looking to become a serious top-roper, this isn’t the place to go. Only a few walls feature top rope routes. It’s a physically smaller club when you compare it to places like Rockhead’s or True North, so crowding is always an issue.

The bottom line: An optimist might call this place “intimate,” and if you have no interest in top-roping this might be the place for you.