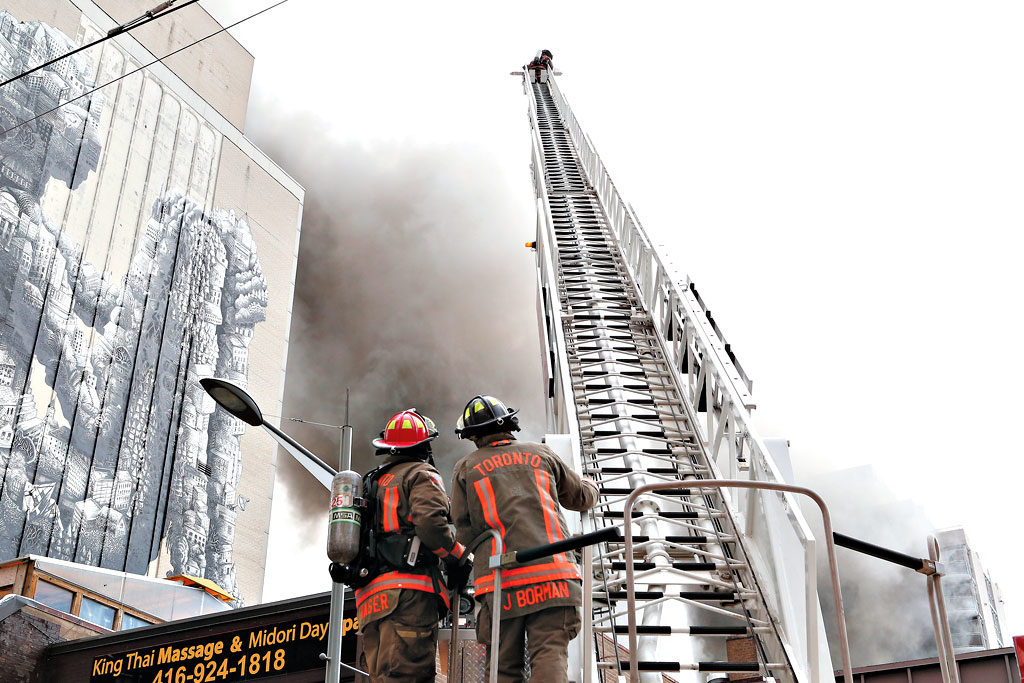 Midtown’s Badminton and Racquet Club is coming back to life after a horrific six-alarm fire swept through its building on Valentine’s Day of last year.

“I remember standing there that day, and a large plume of smoke just enveloped the intersection with ash all over the place. It was remarkable to see such an event in the heart of our community,” councillor Josh Matlow said.

The club moved back into the west side of the building in February of this year. It had been largely saved due to a firewall but was still impacted by smoke and water damage. In March, construction on the east side is expected to break ground — rebuilding in the same spot the club has existed at since 1924.

A ceremony was also held last month to honour the firefighters and emergency service workers who strove to contain the blaze and provide aid to those who had been impacted.

The intersection of Yonge Street and St. Clair Avenue was closed due to flames that day; forcing nearby residents and businesses to evacuate and causing $10 million in damages.

“It’s been a long year but an incredible year with the spirit of the community around us, so to actually occupy the west side of the club feels like moving home again,” Karen Wallace, president of the club, said.

She said the club will be open for tennis, squash and house a fitness centre and a restaurant.
“We also just can’t express in words how grateful we are to the entire community and all the people that came to help that day,” she said.

Nearby, Scallywags restaurant was part of that community.

Stephanie Hamilton, manager of Scallywags, remembered it as a frigidly cold morning with firefighters on the Scallywags fire escape fighting nearby flames before she soon found her own restaurant under evacuation orders.

Scallywags had to close its doors for three full business days to repair some of the damage to the property and was not fully functioning again for nearly two weeks afterwards.

“It was a disaster,” Hamilton said, recalling walking up and down Yonge Street and seeing so many  businesses shut down. “For all the buildings … affected by water and smoke, including us, it has been a tough year. So it is nice to see things starting to get back together.”

Matlow echoed the sentiment. “We are rebuilding and moving forward from a fire that will always be part of our neighbourhood’s memory.”