The CNE grounds may be closed this year but you can still get delicious carnival food in Toronto | TRNTO.com
Skip to content 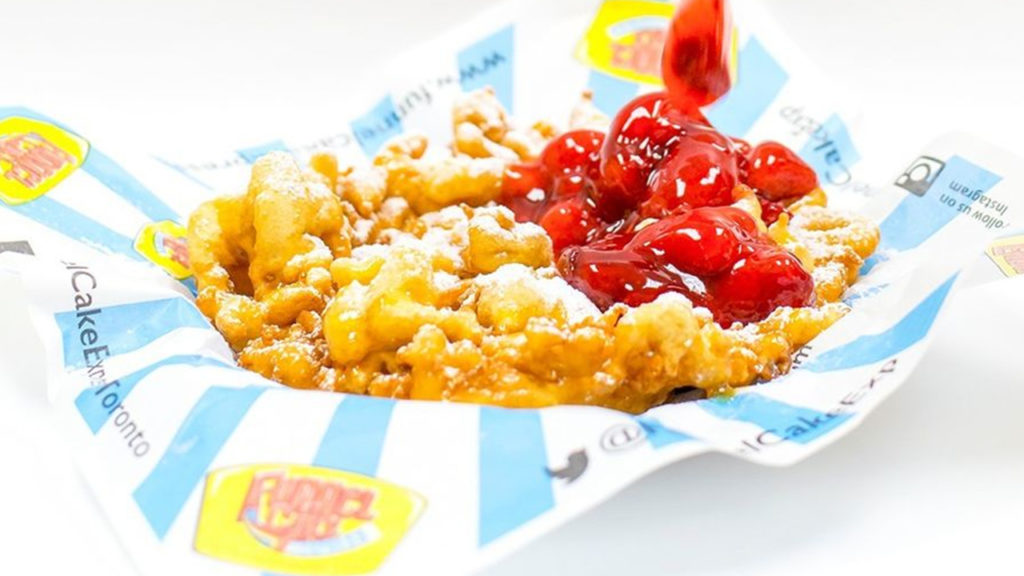 The Canadian National Exhibition has been synonymous with summer in Toronto for decades. In fact, since it first began as an agricultural fair in 1879, The Ex has only been cancelled once in 1942 due to military occupation during the Second World War, and it resumed in 1947. COVID-19 prompted the closure of The Ex in 2020 for the first time in 73 years, and sadly, the exhibition grounds will remain closed again this year, despite the lockdown being lifted.

Food is one of the biggest and arguably the most fun components of the CNE, and while you may not be able to wander the food hall and try a ton of wild creations (cronut burger scandal of 2013, anyone?), in honour of The Ex’s would-be opening date, we’ve rounded up a few restaurants in the city where you can get your fair food fix!

A nest of deep-fried, doughy cake layered with vanilla soft-serve and piled high with strawberry or blueberry compote–the dessert that once drew line-ups at the CNE is seemingly non-existent in the city, but at Funnel Cake Express, it’s as if the CNE is on every day of the week! Their funnel cake is served in three signature flavours: Steam Engine, Locomotion, and the deluxe fully loaded Bullet which includes unlimited icing sugar and your choice of fresh fruit topping and candy topping.

If that’s not enough, a generous serving of soft-serve ice cream is plopped on top. If you don’t want the ice cream and fruit topping, the funnel cake fries dusted with icing sugar are the perfect snack. Funnel Cake Express also has a food truck that travels around the city for weekend pop-ups.

One of the best smells at The Ex is those freshly baked donuts. Served piping hot and dusted in either cinnamon sugar or icing sugar, mini donuts are a classic snack at any fairgrounds. Cops sells their doughnuts in three flavours: classic cinnamon sugar, the OG sour cream, and a weekly special (check their Instagram for the latest flavours). Past creations have included the ube glazed and lemon poppy seed glazed. All of their doughnuts are made fresh from scratch and are available as a 12-pack ($9), an 18-pack ($13.50), or in boxes with a variety of flavours and amounts, making them the perfect treat for any party or large event.

Whether you enjoy them plain or dipped in ketchup and mustard, corn dogs are another summer favourite we’ll miss at The Ex this year. Taking inspiration from the hot dogs served at Coney Island, New York, Fancy Franks opened three locations in the city, including their original spot in Kensington Market. Their deep-fried corn battered hotdog can also be made vegetarian. If it’s just a hotdog you’re after, Franks’ has six specialty dogs on the menu, including the Franks Coney Island (housemade chili, chopped onions, mustard), and the Fancy La La (bacon-wrapped hotdog, melted cheese, jalapeno crisps).

While some people love a classic poutine with cheese curds, fries, and gravy, everyone knows part of the fun in going to The Ex is to check out the crazy concoctions of a classic dish. At Nom Nom Nom Poutine, you can get your classic poutine, or you can try something different to accompany your cheese curds. Nom Nom Nom Poutine offers six twists on this Canadian staple, including bacon, smoked meat, pulled pork, super dog (hotdog) spicy chicken (spicy jerk chicken with parsley), and sprouts (deep-fried Brussel sprouts and mushrooms). Prices range from $7.50 to $11.50.