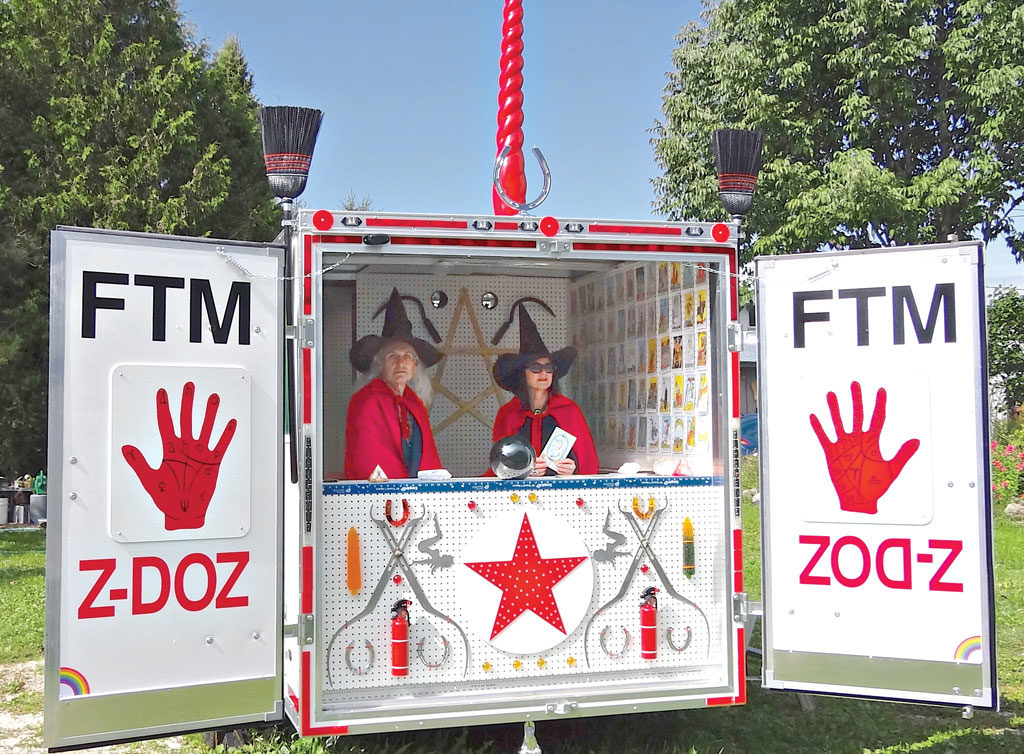 Gazing into a crystal ball might not yield a credible prediction for this month’s mayoral election or tomorrow’s weather, but a new fortune-telling contraption being introduced during this year’s Nuit Blanche is turning traditional divination on its head.
Enter Fastwürms, a Toronto-based artist collective helmed by witches Kim Kozzi and Dai Skuse, who launched the project back in 1979.
The poly-disciplinary duo marries divination and spirituality with pop culture and DIY sensibility and, in the past, have tackled such themes as queer and identity politics, social interaction and the working class.
For the upcoming instalment of Nuit Blanche on Oct. 4, Fastwürms will be doling out predictions to fortune seekers through their newly minted contraption, the Fortune Teller Machine Zardoz, or FTM.
The mechanism was dreamt up after Nuit Blanche’s curator asked participating artists to consider the concept of a circus.
The traditional circus, Skuse says, was a travelling unit and always included a sideshow of divination or card-reading booths. So naturally, as both witches and performance artists, the pair decided to recreate a modern variant.
Run by a Wiccan coven (Kozzi and Skuse, plus two of their collaborators), the oracular machine offers up a personal fortune by combining familiar divination tools (such as tarot cards, astrology and crystal balls) with cybernetics and logic control systems. Think an interactive human Zoltar box.
The apparatus serves as a commentary on the increasing interpersonal work through mechanical mediums, Skuse says.
“It’s a take on an automated teller machine — you replace real human beings with computer systems to do the same kind of interaction,” he explains.
“Whenever you pick up the telephone and you’re dealing with someone in consumer complaints or telephone sales, and you know you’re talking to a real human being, but you know they’re being carefully controlled by a script, the machine part, here, is the algorithm of responses.”
And the pervasive nature of the proverbial machine has also upturned our interactions with each other, Skuse adds, pointing to the cellphone, which is not the device it purports to be.
Whereas, theoretically, a cellphone was originally intended for talking, in practice, it is more often used for texting or emailing.
“We’re taking off a bit on communication systems,” he says.
“We’re into this strange world of contracted English and emoticons. In other words, we have a whole different language system, which I don’t think was really the intention of the telephone.”
As such, FTM is the traditional, transformed — a hybrid comprised of familiar mediums with automated response mechanisms.
Fortune seekers can enter the Fastwürms’ nomadic caravan (a food truck–esque trailer) and, after one of the witches gleans a bit of personal information through a series of questions, will receive a package with a personalized fortune focused on health, wealth, love and sex; a stone; a tarot card; and a customized spell.
Fastwürms and the FTM will be stationed between Ripley’s Aquarium and the CN Tower during Nuit Blanche and will be churning out fortunes as part of the Art Gallery of Ontario’s First Thursdays series on Oct. 2.
BACK TO HOME