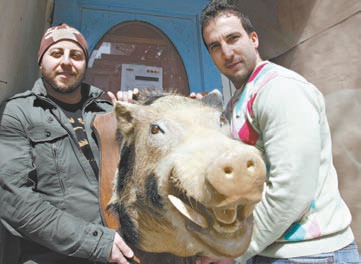 LEASIDE’S BAYVIEW AVENUE strip was blessed with not one, but two fine Italian restaurants. Since their closings, some have tried and failed to bring a little amore to the neighbourhood. But Joe Bonavota, of Little Italy mainstay Bar Italia, aims to change all that. Vero (translation: real) Trattoria is slated to open mid-month.

“Vero is all about ‘real’ Italian food, authentic, regional Italian,” says Bonavota. “Reasonably priced, that’s what we do at Bar Italia, and that is why we are so successful.”

The restaurant will feature a range of fresh and hand-cut, as well as dry, pastas and pizzas fired in the stone pizza oven. Said oven will also turn out fresh- baked focaccia that will be served to each diner along with cracked olives and a vegetable spread.

The restaurant is getting an extensive makeover with Irshan Bukhari doing the design.

“It is going to be rich brown, with lots of wood and white Carrara marble imported form Italy,” Bonavota explains.

Located in the space formerly occupied by Joey Fiasco’s and, before that, Small Talk, with Vero, Bonavota is looking forward to showing his new neighbourhood what he can do.

“I’ve been waiting for three years to open in this area,” he says. “I love Leaside, and I love that strip, and I’m so pleased that I can be a part of the community.”

Partnering on Vero will be Erez Mizrahi, a sommelier and currently general manager of Bar Italia.

Vero will be located at 1580 Bayview Ave.

Toronto has gone burger crazy. But this is no mere fast-food trend. The foil-wrapped, pre- dressed, secret-sauce-wearing beef burger has gone gourmet with a myriad of new, boutique burgerias opening at a breakneck pace around the city. The common denominator seems to be healthier, higher-quality meat and a wide range of gourmet toppings and sides.

The latest in a long line of upscale burger purveyors is Craft Burger (830 Yonge St.). They opened a new, second location recently in Yorkville.

Expect more than mere mustard, relish and ketchup here. Owner Mustafa Yusuf says the most popular item is the spicy burger, offering chipotle mayo aïoli and caramelized onions. The fries are hand cut each day and are cooked in canola oil.

“We have good value compared to other places in the area,” says Yusuf.

Burger Shoppe Quality Meats (210 Ossington Ave.) is another hot ticket in the city, with its second location open since December of last year. Saeed Mohamed, owner, was a software engineer by trade but decided to take his love of burgers and translate that into a casual burger bar with an inviting space to bring friends for food and drinks. This licensed burger hangout offers the classic sirloin burger, homemade BBQ sauce and toppings like aged mozzarella. “We focus on organic wines and locally brewed beer, along with our locally farmed beef,” he says.

Local food on the menu … again

Local Kitchen, soon to open on Queen Street West, will be another experiment in local food, according to Eric Butler, the restaurant’s spokesperson.

The project of childhood friends turned restaurateurs Michael Sangregorio and Fabio Bondi, Local Kitchen will feature a small plates menu of local foods, including vegetables selected from their own King City garden.

The restaurant, which should house approximately 29 seats, will feature cured meats and cheeses and is influenced largely by Fabio Bondi’s time cooking in restaurants in Tuscany, Italy.

The Hyatt Regency, at King and Peter streets, unveiled its new look last month as it completely transformed the former Holiday Inn into a swanky, urban oasis befitting its King Street West environs. The jewel of the facility is the swanky new restaurant, King Street Social Kitchen and Bar, complete with a private screening room, two private dining rooms and an Craft Burger, one of a bevy of upscale burger bars invading the city upscale look with a globally inspired menu designed by the Regency’s executive chef Samir Roonwall.

The menu caters to locals, hotel guests and the entertainment district crowd. Signature items include Vietnamese pho and Malaysian chicken tataki along with western items such as sticky ribs and an Angus burger.

If you have fond memories of the Canadian Bar & Grill and a night of comedy at the Laugh Resort, best check those thoughts at the door. This is a hip establishment looking to take advantage of its location next to the future home of the Toronto film festival.

This month, the popular Rosedale Diner is celebrating a remarkable 30 years in business. Congratulations and best of luck in the future to partners in life, love and killer lamb poutine, Esti and Dubi Filar. They are planning a Monday Night Classics menu for the summer, where they would feature past menu items such as Buffalo BBQ Wings, and Bat’s Liver (you’d have to go to find out). Rosedale Diner is located at 1164 Yonge St.

Chef Deron Engbers (Veritas, Mirabelle), a Toronto chef who has embraced local food, is now helming the kitchen at Amuse Bistro, 1975A Queen St. E. in the Beaches neighbourhood.