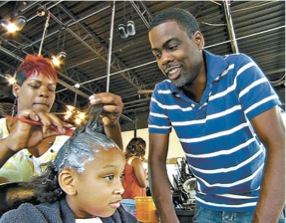 EVERY YEAR AT the Toronto International Film Festival there’s a public interview with a celebrity. Two years ago, it was Bill Maher (very funny); last year featured Jimmy Carter (not so funny). This year, the guest was Chris Rock.

Rock was in town promoting his film Good Hair, a documentary about the way we, especially the black community, handle the issue of hair. This seemingly lightweight topic actually speaks volumes about politics, race and sexuality. In the film, Rock interviews a myriad of people in the hair industry to explore a topic.

Rock’s the perfect choice. His offhand, casual manner gets us onside before we even begin to realize how subversive it is. Evidently the 12 per cent of Americans that are black consume 80 percent of hair products. Billions of dollars are spent by many at the lower end of the socio-economic spectrum, mostly to straighten naturally curly hair; mostly to look “whiter.”

And the chemicals used are toxic; the long-term effects on the scalp and brain have never been studied. The topic should be serious, but Rock makes it funny.

At the screening, the audience was laughing, but the black members of the crowd were howling, recognizing a world that was uniquely theirs.

“I think it’s my funniest movie,” says Rock, master at stand- up and a hugeTV success, from Saturday Night Live to his hit series Everybody Hates Chris.

Rock’s movie output has not been stellar. Nevertheless, I’ve always been a huge fan. I remember his early stand-up days in NYC: his opening line was, “A hooker said she’d do anything for $50. I said, ‘Fine, paint my house.’”

I was also the first person to put Rock on national television in the U.S., although it was a comic misadventure. When I was producing the Joan Rivers Show, I flew Rock out to do his set. I explained to him that he had to give his last two lines to the bandleader so he could be played off. But when he did the set, I guess he didn’t like the way the audience was reacting, so at the two-minute mark of a six-minute set, he changed gears and did his last joke. The band had no option other than to play him off, hearing their cue. I will never forget the stupefied look on Chris’s face when the music kicked in and he had to leave the stage.

But now he is the subject of much deserved adulation. He sat in his TIFF interview as if he owned the building, legs outstretched in a swank khaki sweater and grey slacks. He talked about his film that was inspired, he said, by his daughter, who asked him, “Daddy, do I have good hair?”

It was a virtuoso performance.  He talked about his relationship with Obama (“But I won’t visit him in the White House. Once you get that close, it would be hard to make fun of him.”). And there was a characteristic politically incorrect moment when an East Indian man asked him if he liked India, where some of the film had been shot.

“It was a bit too Slumdog for me,” replied Rock. “You’re lucky. You got out.” The audience applauded, laughed and gasped, all at the same time.

And with that, the afternoon was over. Rock waved to the crowd and disappeared into the sunshine.