Comedienne not so funny in her biggest role as mummy | TRNTO.com
Skip to content 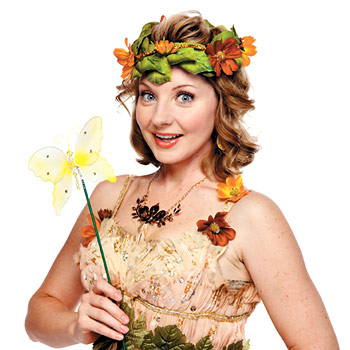 Jessica Holmes is best known for her hilarious, spot-on impressions of pop icons, performed so seamlessly on Royal Canadian Air Farce.
But when Holmes and I recently chatted for an hour in between her rehearsals for the new Ross Petty family musical Robin Hood, it was clear that her passion for funny has been tempered by motherhood.

The irony of Holmes’s obsession with her two kids is that just four years ago she had zero interest in children.  When her husband actor Scott Yaphe asked her to promise him they would have kids, her dry reply was, “I’m more than my womb.” Two years later, Holmes awoke and “had to have a kid that day. My biological clock kicked in, and my husband had to lie there while I made babies on him.”

The road to motherhood was no laughing matter for Holmes. It took eight months to conceive, and soon after she discovered she was pregnant, it appeared she’d had a miscarriage. She was sent for an agonizing ultrasound to confirm that her baby was lost. Two days later her doctor called to say she was, in fact, still pregnant.

When her daughter Alexa was born in 2006, Jessica fell hopelessly in love. Then 13 months ago, she happily welcomed her son Jordy into the world. But like many, she found the non-stop caretaking of newborns exhausting.

“I wish I had stopped breastfeeding at six months and treated myself well. I feel sorry for the woman I was. I was trying to keep up with the supermoms.” Add to that an early end to mat leave, and we have one seriously neurotic mummy.

“I had to commit to jobs before I had the baby. Then baby comes, and I’m a bit crazy when I’m away from her. I would have irrational thoughts that she would forget who I was.” At eight weeks post delivery, Holmes was back making people laugh in her Celine wig on RCAF.

Whenever there was a break in shooting, she’d scurry over to her dressing room where her daughter and mom were waiting for her.
“I felt like I had to power love her, supersize our time together.”

And then the season ended and crazy pace stopped. Holmes had the luxury of being a stay-at-home mom. This drove her nuts in that other kind of way. You know, that “Help I need some time to myself” way.

“Suddenly I’m not fulfilling my creative side. I need to be commuting with a giant audience. It does something for my soul. It completes me.”

Holmes’s biggest obstacle to finding her way through the maze of mummydom was letting other people determine what balance is for her.
“Once I realized no book, no other mom, neighbour or family member had the answer, I found the confidence to decide what kind of mother I was.” Her solutions: spend four-hour chunks of time with her kids.

“Anything more than four hours and my patience starts to wane,” she admits candidly. “And our house looks like a tornado hit a garage sale and that’s OK.”

And what about the funny in the mummy?

“I’m more about having fun with my kids than being funny these days. Most of my humour comes from stories from my moms’ group. It’s more honest humour than doing impressions.” She pauses. “But I’m still funny. I just have a little less energy.”