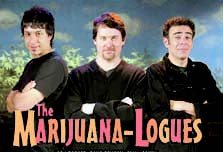 AN ABSURD SCANDAL ripped through the comedy world last month, creating an international incident and then disappeared instantly.

Doug Benson, an American comic with middling credits — a few talk shows here and there, an off-Broadway show — appeared on a Fox News show called Red Eye. The show leans rightward and usually includes a stand-up guest to ensure a minimum of wit will occur. On the show in question, the topic was about Canadian troops in Afghanistan.

Evidently, a Canadian Armed Forces spokesman said he was looking forward to the end of the conflict so his tired troops could enjoy some much needed rest. “I didn’t even know they were in the war,” said Benson. “I thought that’s where you go if you don’t want to fight.”

You have to understand that Benson is not a political comic. His successful off-Broadway show is called The Marijuana-Logues, and he specializes in stoner and slacker humour.

The show was posted on YouTube, and the clip went viral. Canadians were outraged.

Defence Minister Peter MacKay got into the act, demanding an apology from the comedian. Amazingly, Benson complied, vowing to boycott Fox News as well. Think about it: a highranking Canadian cabinet member got an American comedian to apologize for a joke! I was both impressed and appalled. But wait, we’re just getting warmed up.

It seems that Benson was booked a few weeks later at a comedy club in the West Edmonton Mall, Ricky Bronson’s Comic Strip. When the crisis hit, Bronson immediately cancelled the booking. I was full of selfrighteousness at this point, thinking I would never capitulate to those who would silence comics blah blah blah.… But it turned out Bronson hadn’t cancelled Benson after all. I spoke to T.J. Markwalter, Benson’s agent at the Gersh Agency. It turned out that Markwalter pulled the plug.

“I can’t guarantee Doug’s safety,” he told me. “Have you seen the blogs?”

So I visited the Facebook sites that had been set up. And there they were: hundreds, maybe a thousand, death threats and intimations of violence against Benson.

“If Doug Benson comes to Edmonton, he’ll never make it to the stage”; “Benson, I hope you die a slow and painful death.” And so on.

This was all too weird for me. Benson’s statements were ignorant, but hardly inflammatory.

Comedians have been making fun of the Canadian military ever since I can remember.

Larry Horowitz used to have a classic bit about calling for the Canadian military and being met by “three gliders and a Zamboni.” Everybody laughed. Of course, those were the days when you could assume Canadian audiences were mostly pacifist in nature — and they were.

What saddens me about the whole affair was not Benson’s unfortunate comments, but how quickly we took the bait. Benson was ignorant, but those who attacked him were vicious and ugly. Maybe politicians and journalists should be careful with what they say, but comedians?

They should have the freedom to be silly and say stupid things from time to time without worry of physical harm, especially in this supposedly peace-loving country.