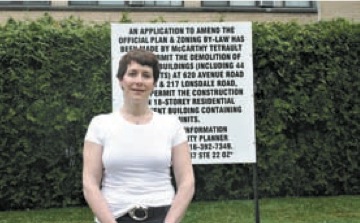 A CONTROVERSIAL FOREST HILL development proposal will go to the Ontario Municipal Board pre-hearing this month.

Minto 201 Developments Inc. first submitted the application in 2006, which sought to demolish a five-storey apartment building and two detached houses at 620 Avenue Rd.

The buildings, which border the lower Village and are across from Upper Canada College, would be replaced with an 18- storey, 58-unit, residential condominium building, including 108 underground parking spaces. One of these properties was the Etta Flick house, added to Toronto’s heritage property inventory in 2006, at 215 Lonsdale Rd.

Despite a number of revisions to the original proposal — including a new rental housing replacement strategy — city planning staff concluded that the proposal failed to comply with the city’s built form and housing policies.

“We’re obviously pleased by it,” said Jennifer Kennedy, president of the Forest Hill Homeowners’ Association, of the decision. “Our primary concern is the scope and scale of the project and the associated impact on the community.”

Not everyone agreed with the decision, however.

“We think that the plan we have submitted is sensitive to the transition issues,” said Chris Sherriff-Scott, a senior vice- president at Minto. “We think it’s a fine project, done by an outstanding architectural firm that takes into consideration the sensitivity to the community that the [city] staff don’t agree with.”
“We’re not going to slight the architectural firm,” said Brian Maguire, secretary of the Forest Hill Homeowners’ Association. “They have a good reputation. So it’s less the ultimate design of it and just the magnitude of it.”

Kennedy concurred. “It’s a massive, massive building in a planning sense,” she said.

“It occupies almost the entire lot. It is much taller than anything on that side of Avenue Road. It has much higher density than anything on that strip of Avenue Road, either side. Do we understand that that building that’s currently there is likely to be developed? Absolutely. We are not antidevelopment. We would welcome a sensitive development that respected the community as a collective,” Kennedy said.

What would constitute such a development?

“That’s not for us to say, particularly when it’s before the OMB,” she said.

The pre-hearing is scheduled to take place at the Ontario Municipal Board on July 10.