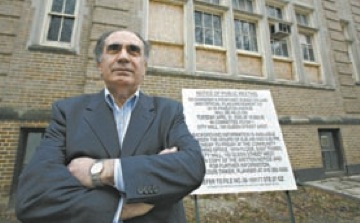 DESPITE STRONG RESISTANCE from Yorkville residents, an historic school protected by the Ontario Heritage bylaw could be converted to an eight-storey condominium building, adding 38 units to the neighbourhood.

Developer Ken Zuckerman applied to develop St. Basil’s School on Hazelton Avenue into a residential development, with the facade of tbe building intact. The school, which was built in the neo-gothic style in 1928, is located within the Yorkville Hazelton Heritage Conservation District.

But even though the property is protected by the heritage bylaw, Coun. Kyle Rae said the site, which has been neglected for many years, needs to be cleaned up. Council deferred making a decision to a later date, but Rae said the city will likely settle for a six-storey design, with each storey set back from the facade of the building.

“If you’re on the other side of the sidewalk, you’ll only see one floor of it,” Rae said of the revised design.

Many Yorkville residents wrote letters to the city to protest the renovation. But Rae said that many of the complaints he heard from local residents do not hold water.

“One person said it would have a negative impact because people would turn their lights on at night, and it would be casting light into the street,” Rae exclaimed.

“My jaw dropped. I can’t believe people actually think like that — that it’s an offence that the light of your living room will impact on the street.”

Phillip Gevik, who owns Gallery Gevik on Hazelton Avenue, opened his business on the street because he was attracted to its special charm, which he said tourists from all over the world come to see. He said he is open to change, but would like to ensure that whatever is developed on the site is in harmony with the existing architecture on the street.

“I don’t mind the development, but the changes, it doesn’t look good, and it doesn’t harmonize with the rest of the other ones that we have,” he said. “That’s what bothers me.”

Historian Jane Beecroft argued that the building shouldn’t be augmented at all. Toronto Catholics wanted to build the school in the Annex, but the neighbourhood was largely Protestant and it wasn’t allowed. Instead, it was built in Yorkville.

“Yorkville has had a long history of welcoming people who were not welcomed in Toronto,” Beecroft said. “Out of all the welcoming physical symbols that Yorkville once had, this building is the only one still standing.”

But Zuckerman’s lawyer, Adam Brown, said the school was only included in the conservation district as an afterthought.

“It was always about the Victorian homes,” he said. “This building is not part of the Victorian streetscape.”
Brown said that the integrity of the structure will be retained, and with large setbacks on upper storeys from the edge of the lower floors, the community will be none the wiser.

“They will not see the upper portions of this building at all,” he said. Brown is confident residents will like the finished product. “It’ll be fantastic.”