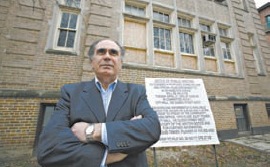 A CONTROVERSIAL APPLICATION to convert an historic Yorkville school is headed to the Ontario Municipal Board.

Developer Ken Zuckerman’s application to develop St. Basil’s School on Hazelton Avenue into a residential development could not be heard at a council meeting on June 23 because of the city strike. As a result, the applicant appealed to the provincial board.

The school, built in the neo- Gothic style in 1928, is located within the Yorkville Hazelton Heritage Conservation District. The application would add 38 units to the neighbourhood.

Residents banded together to form the Friends of St. Basil’s group to fight the application, saying the building must be protected because of its historical significance.

“Yorkville has had a long history of welcoming people who were not welcomed in Toronto,” said Jane Beecroft, a local historian. “Out of all the welcoming physical symbols that Yorkville once had, this building is the only one still standing.”

Beecroft said Catholics in Toronto wanted to build the school in the Annex, but the neighbourhood was largely Protestant, and it wasn’t allowed. Instead, it was built in Yorkville.

Zuckerman’s lawyer, Adam Brown, said the school was only included in the heritage conservation district as an afterthought.

Brown said that the integrity of the structure will be retained, and with large setbacks on upper storeys from the edge of the lower floors, the community will be none the wiser.

“They will not see the upper portions of this building at all,” he said. Brown is confident residents will like the finished product. “It’ll be fantastic.”

Phillip Gevik, who owns Gallery Gevik on Hazelton Avenue, said he opened his business on the street because he was attracted to its charm. He said he’s open to change but would like to ensure that whatever is developed on the site is in harmony with the existing architecture on the street.

“I don’t mind the development, but the changes, it doesn’t look good, and it doesn’t harmonize with the rest of the other ones that we have,” he said. “That’s what bothers me.”

A date has not yet been set for the hearing.