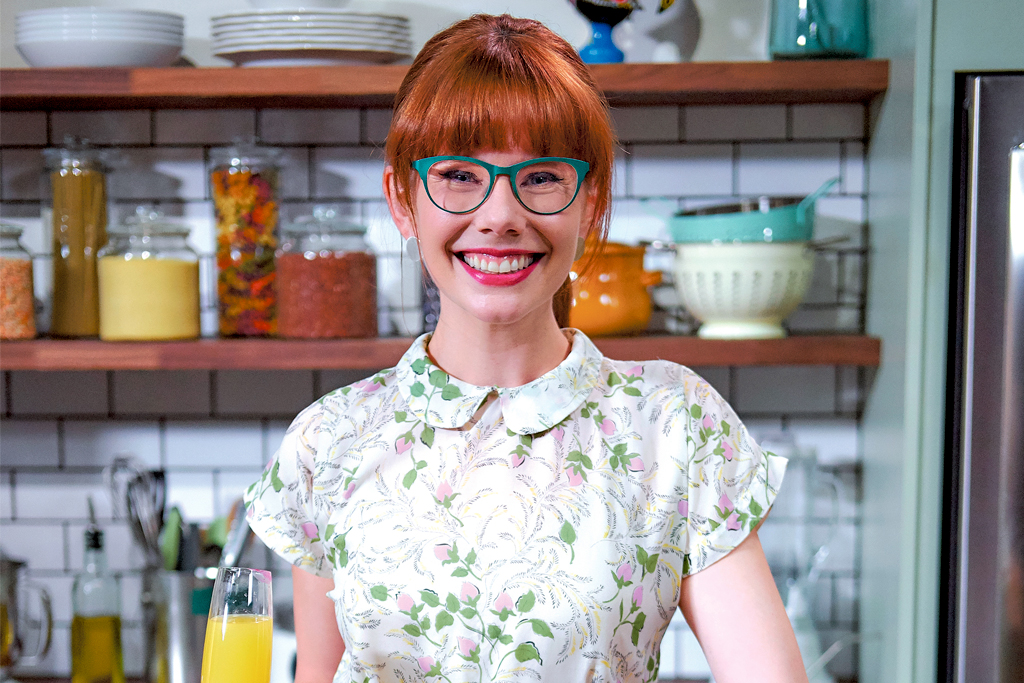 If there was ever a time we could all use a cheerful distraction and the chance to hone our home-cooking chops, it’s now. Fortunately, Mary Berg is offering us both with her show Mary’s Kitchen Crush, which returned to CTV on March 22. The new batch of episodes promises approachable recipe inspiration plus plenty of lighthearted entertainment. We sat down with the MasterChef Canada winner, TV host, and cookbook author to chat about the return of her show and how we can all become better home cooks.

Berg felt drawn to cooking at a young age after witnessing the meaningful influence food can have on people’s lives. When Berg was four years old, her father passed away in a car accident, and she says that food, in a small way, helped her family to heal.

“During that incredibly sad and hard time for my family, I saw how much deliveries of homemade casseroles from friends and family meant to my mom,” says Berg. “I’ve just always loved how much compassion you can convey through food.”

Berg began helping her mother cook meals for the family, and by the time she was in university, she was whipping up pies, pasta, and pastries for her roommates and, later, her co-workers.

“I have always loved creating and sharing food with those around me,” says Berg.

Berg’s culinary craft remained a hobby, however, until her win on season 3 of MasterChef Canada in 2016.

“It totally had a 180-degree effect on my life,” explains Berg. “I went from working in an office to getting to wake up every single day just thinking about food and what I was going to get to create that day.”

Following her win, Berg began appearing as a food expert on CTV’s Your Morning and The Marilyn Denis Show. Her own TV show, Mary’s Kitchen Crush, debuted in April 2019, and her first cookbook, Kitchen Party, which was published in September 2019, became a national bestseller.

Berg says the new episodes of Mary’s Kitchen Crush are more personal, introducing viewers to her friends and family.

“The show is just me in the kitchen cooking simple and delicious food for the people in my life who matter most,” says Berg. “In these hard and rather isolated times, I hope that the show will continue to make viewers feel like they’ve been invited into my kitchen just to hang out and enjoy.”

Berg’s goal with Mary’s Kitchen Crush is to help viewers feel more empowered about cooking at home. “For a lot of people, the idea of failure in the kitchen is such a hindrance to actually trying a recipe,” she says.

Berg believes that a sense of play is the antidote to the anxiety some people feel when attempting a new recipe.

“I think making something in the kitchen should be approached in the same way as a little kid trying to draw a cat for the first time. Grab all of your ingredients and try your best,” says Berg. “Does it look perfect? Probably not! But that’s OK! You still made something, and it is most likely still going to be edible if not delicious.”

According to Berg, cooking isn’t about getting a recipe exactly right. “My main tip for people starting to learn to cook is to just roll with it,” says Berg. “Yes, follow a recipe, but if, in the end, you find it a little bland, give it a squeeze of lemon or a splash of balsamic vinegar. Does it taste dull? Toss in another pinch of kosher salt. Want the flavours to come together a little more? Add a little extra virgin olive oil or a bit of butter and let that melt in.”

Following each new episode of Mary’s Kitchen Crush, full written and video recipes featured on the show are posted on ctv.ca, making it easier for viewers to replicate Berg’s kitchen creations at home. She anticipates that the hearty lasagne featured in this new batch of episodes will be a hit with viewers in need of a little indulgence.

“My friends are all real lasagne heads, so that’s a go-to when we’re all getting together. On an upcoming episode of Mary’s Kitchen Crush, I make a monstrous three-meat, four-cheese lasagne for my friend Rob, and if that’s not comfort food, I don’t know what is!” Berg says with a laugh.

One of the most popular recipes to date from her show is a garlic and herb flatbread made with store-bought pizza dough.

“It tastes like you’re making bread from scratch, but all you really have to do is heat up a pan, melt some butter and grill up some dough,” she says.

The secret to home cooking, says Berg, is to go with the flow. “Cooking isn’t a rigid thing. Recipes taste different depending on your ingredients and, at least for me, how I’m feeling on a given day,” she says.

“There’s pretty much always a way to make something taste better to you and it’s usually just as simple as adding some salt, lemon, butter or fresh herbs. And if that fails, I always just reach for my favourite hot sauce!”