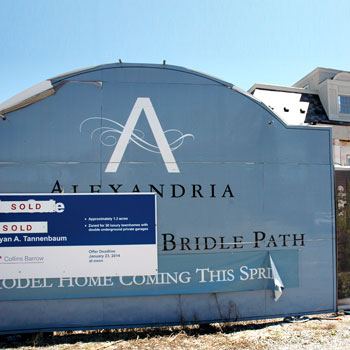 Although confirming no new paperwork has yet come across the desk of City of Toronto, City Planning staff, Coun. Jaye Robinson recently announced new plans seeking to double the number of townhouse units at the Homes of The Bridle Path development are coming down the line.

Formerly the Alexandria townhouse project was being developed by Hush Homes before being purchased out of bankruptcy early this year by Urbancorp. A long fight by the councillor and local residents over the original project’s density of 20 units failed in an Ontario Municipal Board (OMB) hearing. Now, in light of potential plans to increase the number to 40 units, some are hoping that ruling — the lesser of two evils — will remain in place.

“Twenty units was an abomination; 40 is just unspeakable,” said David Bawden, past president of the York Mills Ratepayers’ Association. “Twenty [units] should never have been allowed there in the first place. The OMB pays very little attention to what the public concerns are, from my standpoint, but now we will have to try and rely on that first OMB decision standing.”

“Twenty units was an abomination; 40 is unspeakable.”

The controversial townhouse project, on the east side of The Bridle Path at Bayview Avenue and Post Road, was to have been already completed for occupancy under its original owners. Sales of the units that started in the $2.4 million range, were slow and forced the project’s bankruptcy. Original plans by Hush had the townhouses all at three storeys and between 3,700 and 3,900 square feet with each served by a two-car, underground garage. The new developer is advertising the starting price point at around the $1 million mark for three storeys, three bedrooms and square footage ranging from about 2,000 up to about 2,300. Robinson explained that Urbancorp can go ahead with the original plans as approved by the OMB, but to make any major alterations will require the full application process, meaning Toronto City Council meeting debates and public consultation.

“A change of any magnitude needs an application and the approval process, which can take time,” she said. “We are aware of what they are planning but at this point haven’t received that application.”

Representatives from Urbancorp did not return requests for comment by press time.