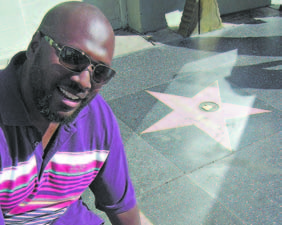 THAT KOBE BRYANT and Co. won the NBA Championship in June came as no great surprise to NBA XL co-host Mark Strong. Nor to most NBA fans, for that matter, given the L.A. Lakers’ stellar season and talented lineup. But Strong has a slight advantage when it comes to making such predictions. His show, an NBA lifestyle and culture program, offers an up-close look at players’ lives both on and off the court, which means Strong gets to tag along to players’ homes, on shopping outings and road trips and more. Oh, and he gets paid to attend NBA basketball games.

In June, when Strong and crew taped an episode at the Western Conference finals between the Lakers and Denver Nuggets, he could tell that the Lakers were the team to beat.

“Once we saw them handle Denver, I knew for sure they were on their way,” says Strong. With scores of high-profile interviews now under his belt, Strong, who’s in his mid-30s, says he doesn’t really get nervous around stars any more, but the early going was a bit different.

“The first time I got to talk to Kobe. He was one of the first,” says Strong. “Since Michael [Jordan] left, he’s the best player, so I was impressed by his stature. I got a bit of butterflies, but I got over it.”

In his spare time, the baritone Strong is the voice-over man for the Junos, Canada’s Walk of Fame TV special and more. It’s a natural progression, since it was through radio that Strong got his start, working as a host on radio station FLOW 93.5. From there, it was onto NBA XL.

But only a handful of years ago, he was just an impressionable teen in Ms. Lemberg-Pelly’s English class at Oakwood Collegiate. Today, Strong is thankful for her positive influence.

“She was so determined to make sure that everyone cared about learning. That might sound corny, but in high school, especially today, kids aren’t even coming to class, much less doing the work,” he says. “With her, she would always find some way to find something in our culture or background and relate it to, say, Shakespeare and bring us into the fold of what she was talking about.”

Now, with Toronto Raptors star forward Chris Bosh eligible for free agency at the end of next season, can Strong predict whether Bosh will stay in Toronto?

“If my name was money, I could talk to Chris all day. If my name was championship, sure,” he says. “Those are the two things he wants.”