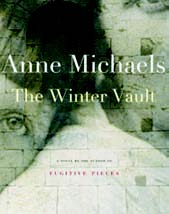 IT WAS AN image, solitary and haunting, that started Toronto writer Anne Michaels down the path that would lead her to writing her long-awaited second novel, The Winter Vault.

“It was all attached to an initial image of Avery painting Jean’s back at the site of a temple being moved,” says Michaels, of the book’s central characters. “All the relationships between the characters and the dismantled temple were right there in that first image.”

Of course, that was years before her debut novel Fugitive Pieces was published in 1997. A book that would rocket Michaels to the top of the best-seller lists around the world, establishing the poet turned novelist as a force in Canadian letters.

Not that she was sitting idly by over the past dozen years. Michaels kept busy writing a couple new books of poetry, a play, a few oratorios and five as yet unpublished children’s books.

“All the time this book was my main project,” says Michaels.

In The Winter Vault, Michaels returns to historical fiction as she pens the love story of Avery and Jean, weaving in parallel histories of the moving of the Abu Simbel to escape the rising waters from the construction of the Aswan Dam in Egypt and the building of the St. Lawrence Seaway. A project that would bury a number of small Ontario towns under water.

“I knew from the start it would take a lot of research,” says Michaels, who spent years outlining the work. “With that much research, I like to let the facts settle in. Facts, I think, take some time to transform into meaning.”

Michaels, not surprisingly, isn’t one to rush a story as it unwinds in her mind.

“Certainly for the initial part of the process, the gathering the facts and also really absorbing what the experiences of the characters are and what the stories are, I think a lot before I start to write,” says Michaels. “After that you’re living, breathing and sleeping it — that’s all your doing.”

The Winter Vault is telling evidence of Michaels’s considerable skill as a writer, rich with metaphor, moving and detailed in its portrayal of the intimacy of relationships. All according to design, she says.

“I want the reader to come with me into this book,” Michaels explains. “When I write, the whole structure and pacing of the book takes into account this desire of mine to have the reader really enter into the book with me, the ideas and emotionally into the experience.”

WHAT IS DEB MCGRATH READING?

“I am reading Girls Like Us by Sheila Weller. Great insight into the complicated talented trio of Joni Mitchell, Carly Simon and Carole King. Loving it! Every time I put the book down I turn on their music. Also reading Bonfire of the Vanities by Tom Wolfe. Yes, I know, a day late and a dollar short. But interesting reading during a recession. Classic.

Deb McGrath will take part in Scrabble With The Stars!, April 6 at the Suites at 1 King West.