Cranes in the sky don’t equal quality of life on the ground | TRNTO.com
Skip to content 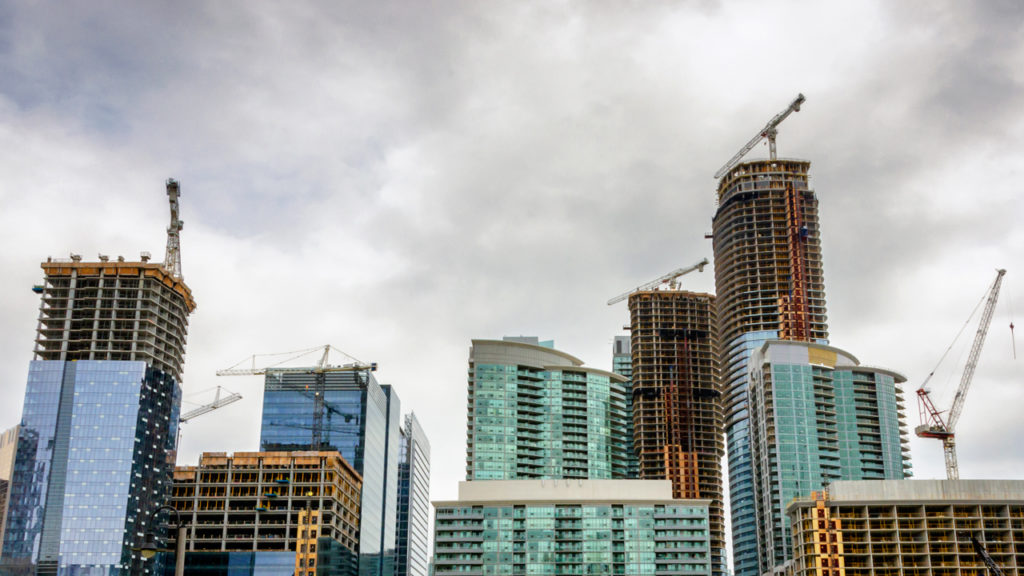 You would not be wrong for thinking Toronto is being overrun with new development projects.

An American company, Rider Levett Bucknall, does a count of building cranes every February in the two dozen largest cities in North America. This year it found there were 10 cranes in New York City, 11 in San Francisco, 12 in Chicago, 13 in Boston, 22 in Denver, 35 in Calgary, 43 each in Seattle and Los Angeles and 45 in Washington, D.C.

In the city of Toronto, in February there were 208 building cranes. That’s 20 times more than in New York City. Eight of those cranes were for transportation, surely for the Eglinton Crosstown, which will be completed … let’s just say it may be completed in the future. Nineteen were for commercial buildings, 32 for mixed use, and the majority, 125, were for residential, mostly new condos. Buildings only four or five storeys high do not require a crane, so they are not included in this compilation.

But 2021 is not a banner year for Toronto. The city outstripped the rest of North America each year from 2016, often having three or four times as many cranes as the next competitor, although the number has climbed from just over 100 cranes in Toronto five years ago, to double that this year. Our city is exploding as others are coasting or maybe even declining.

Virtually all of these larger buildings require zoning or other planning changes, which means studies must be done and reports prepared by city planning staff and by other departments before approval by city council. The workload has increased enormously, but city budgets have not. The gross spending by the planning and development de’;l,m nt was spent in 2020; and $54 million is budgeted for this year, although the crane count is double what it was in 2019.

The workload means staff is involved in development approval. Planning for the future seems to take a back seat given the number of development applications that must be addressed.

Two arguments are made in support of such significant growth. First, the population of the Toronto area is surging. The federal government has a target of 400,000 new immigrants and refugees in 2021, and since about half usually come to the GTA, that’s pressure for new housing.

The second argument, made strongly by the development industry, is that the only way to moderate housing prices, which are going through the roof, is by increasing supply. That would mean instead of 125 residential cranes,Toronto should have 175 or more. Can you imagine a 50 per cent increase in apartment building activity? With the demand for skilled workers, construction costs would go up, which means the housing would not be any less expensive. The increase in new housing supply, both highrise and low-rise suburban, has been constant for the past 50 years, yet housing has never decreased in price. The only way more affordable housing will be built is through government interventions — subsidies and regulations requiring affordable units to be included in any development project.

The province adds to the pressure, whether through unilaterally increasing densities in the Eglinton and Yonge area, through ministerial zoning orders in Corktown or through decisions of the Local Planning Appeal Tribunal to refuse city council’s request to keep 6.5 acres in the railway lands as parkland instead approving more development.

Strong development pressure is certainly a better problem for the city than stagnancy or decline. But all the big questions are there: Is this the kind of city we want? Would we be smarter pushing for five- or six-storey buildings made of wood, which are better for climate change issues, than bigger buildings made of concrete? How will affordability issues be addressed and who will put the money into housing that most families can afford? Are growth pressures simply beyond our control? Should we just go with the flow?