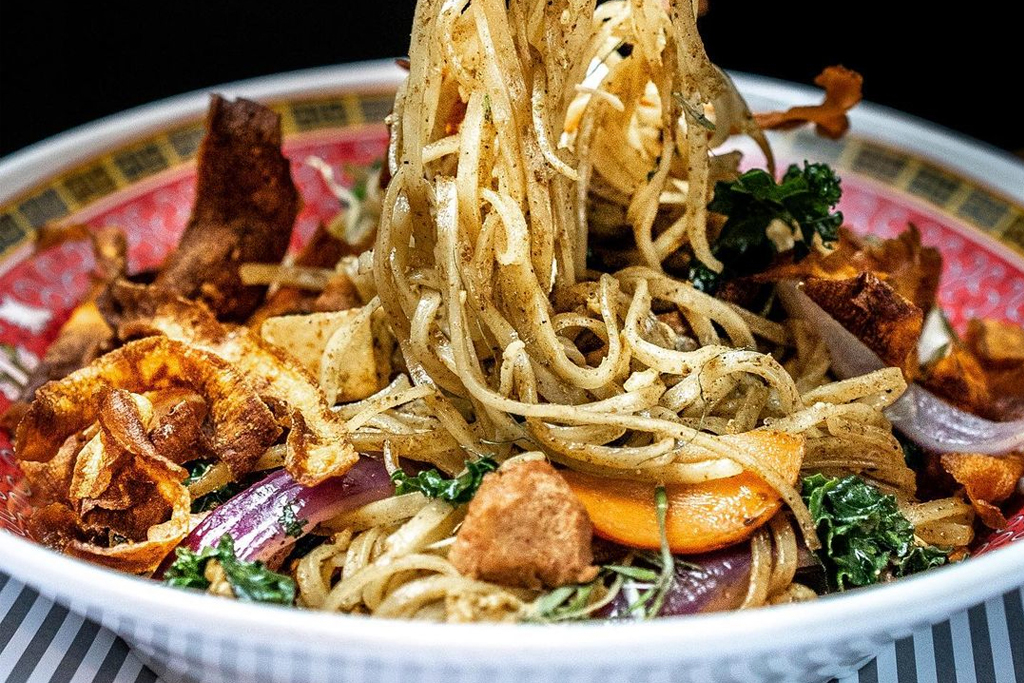 Being in a kitchen is just natural for chef Nick Liu. As the son of Hakka parents in Toronto, he grew up eating dishes that his ancestors had been preparing for hundreds of years. It’s that passion for cuisine, combined with modern flair and a western touch, that he brings to DaiLo Kitchen at 503 College St., his other food ventures, and now DaiLo Pop-Up Noodles, his most recent project.

“I started DaiLo doing pop-ups and it’s exciting to be doing them again,” Liu says.

The idea for a pop-up shop was born out of pandemic necessity but has developed into a more permanent concept.

“The main reason we are doing the pop-up is that there aren’t enough hours at DaiLo for my staff,” he says. “The pop-up keeps three more of our staff on the payroll. All of our employees that have decided they want to work, have hours and health-care benefits.”

DaiLo Pop-Up Noodles will run out of Hot Black Coffee at 1993 Yonge St. (at Davisville), opening for takeout and delivery Thursdays through Sundays after Hot Black Coffee closes for the day.

“The owner, Jimson Bienenstock, has been a great ally during this pandemic and the response to the noodles has been incredibly positive,” Liu says. “So much so that we’re going to continue to operate in that space and are contemplating expanding hours to offer weekend brunch service.”

DaiLo Kitchen on College continues to offer weekly tasting menus, inspired by the food experiences Chef Liu has had in his life, combined with random things that cross his path.

“I actually just partnered with a Canadian, plant-based protein company called SuperVega and, for Chinese New Year, created an eight-course tasting menu using their product on every dish,” he says.

While Liu says pivoting the business to accommodate the pandemic has been one of his most difficult challenges to date, he notes that positivity is key when owning and maintaining a restaurant.

“It seemed every couple of weeks we had to switch business concepts to keep up with health regulations. It cost us a ton of money that we weren’t really making in sales at the time,” he says. “Maintaining a positive attitude is the most important attribute a business owner can have during this pandemic. There’s so much uncertainty, owners are stressed, and there’s so much more revolving factors that we deal with on the day to day, compared to before. It can be tough sometimes to put on a smile and appear positive for your staff.”

In addition to the weekly takeout and delivery menu at DaiLo Pop-Up Noodles, and tasting menus at DaiLo Kitchen, Liu is also offering NinjaChef Secret Sauces to his customer base.

“The NinjaChef Secret Sauces started out of necessity. It was to add another stream of income to DaiLo, but turned into a fun project that I really want to push forward,” he says.