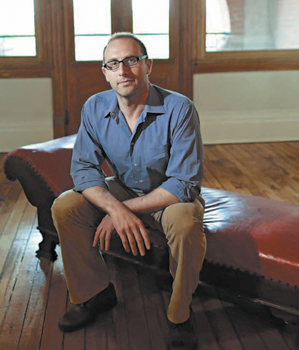 ROMAN CANDLES STREAK across the night sky in G. Ross Lord Park, flashes of light as brief as they are bright. Teen boys play house league hockey at Carnegie Centennial Arena under monikers such as the Toronto Red Wings — a declaration of ambitious NHL dreams born in humble circumstances. A young girl pedals her bike down sunsetbaked Wilmington Avenue, stopping to tape posters of her missing brother to telephone poles in quiet desperation.

For David Bezmozgis, they’re scenes of an artistic vision conceived in adolescence and finally realized in adulthood. For North Yorkers, they are parts of a recognizable and resonant teen drama, one that takes place right in their backyard.

Indeed, the critically acclaimed and award-winning author of Natasha and Other Stories has made North York the star of the show in his feature movie Victoria Day, which he wrote, produced and directed. Filmed at locales such as Newtonbrook Secondary School and even his mother’s house in his old neighbourhood, the movie, which premiered at the Sundance Film Festival in June, blends fiction with real-life events from his youth growing up in the Russian-Jewish enclave along Bathurst Street between Steeles and Finch Avenues.

“I know the area very well. I’m connected to it in an intimate and emotional way,” says Bezmozgis. “It just makes sense to me to have the story set there. I also know that there are some very interesting stories that happened to the people who live there, particularly the Russian immigrant community.”

Even the location where Bezmozgis chooses to discuss his work and his old stomping grounds is arranged with respect to local geography: he shares his experiences over coffee and pastries at World Class Bakers because it’s a stone’s throw away from Bathurst and St. Clair West where he resides now at 36.

“It’s between where my life happens now, where the film and literary industries are located,” he says. “But it’s also halfway back to North York where a lot of my family is and where a lot of the inspiration for my work comes from.” Literally and figuratively, this is his true middle ground.

The coming-of-age story, set in summer of 1988, focuses on young Ben Spektor (played by ACTRA Award–nominated Toronto native Mark Rendall), the son of Russian immigrants who goes to school at Newtonbrook and plays on a local amateur hockey team. He begrudgingly lends his teammate Jordan Chapman money to buy drugs for a Bob Dylan concert they’re both attending at Ontario Place. Panic grows within the school and community when Jordan goes missing following the concert, and Ben faces the dilemma of either keeping quiet or facing the music.

The script was inspired in part by the death of 14-year-old Benji Hayward, who drowned in Lake Ontario after taking LSD with a friend at a 1988 Pink Floyd concert at Exhibition Stadium. More recently (and chillingly), the body of 19-year-old Shane Fair was recovered from the lake near Ontario Place not even a month before the film premiered in Canada.

The story provides tremendous insight into where Bezmozgis grew up. Ben lives in two different worlds: the conventional Canadian life as a high school student and amateur hockey player in the 1980s and the more traditional life in the eastern European home.

Bezmozgis has first-hand knowledge of both, having played Finchurst house league hockey at Carnegie Centennial Arena, from the ages of six to 14, where he says he excelled at the pre-game skate. (“I wasn’t quite as good a player as Ben is in the film,” he says and smiles.)

When not on the ice, he was staying out of trouble, or at least trying to, as a student at York Mills Collegiate Institute. No slave to fashion, Bezmozgis preferred music that predated his generation, opting for Led Zeppelin and Jimi Hendrix instead of Depeche Mode (though he’s quick to note that the Smiths have grown on him). Appreciation for older music — it’s a sentiment Bezmozgis shares in a scene where Ben and love interest Cayla wax nostalgic about San Francisco in the 1960s, suggesting that the real excitement lay beyond their suburban borders in a different time.

Nothing for it but to create your own amusement then, which might include firing Roman candles at friends during clandestine nighttime skirmishes at parks, another real-life experience Bezmozgis documents.

“It’s funny, you live in the suburbs so you hang out at people’s houses mostly,” he says. “You hang out in parks as you see in the movie: G. Ross Lord Park, Earl Bales Park, several parks in Thornhill where a lot of friends live. The parks are the heart of the community. Immigrant Canadians gather there for barbecues and soccer games. High schoolers gather there for beer parties. That’s where life happened. And besides that, the Roman candles looked great on-camera.”

Though one would never volunteer tales of such mischief to stern, Russian parents who demand diligence and common sense from their children.

Bezmozgis was born in Riga, Latvia (part of the former Soviet Union), and came to Canada with his family when he was six, and he’ll be the first to tell you that an eastern European Jewish household will not tolerate nonsense gladly and expects children to make the most out of the blessing of living in a land of opportunity.

“This is particularly for people who came across during the Soviet era,” he says. (Bezmozgis’s parents came to Canada in 1980.) “These are people who are educated and, in a lot of instances, work below their qualifications in this country. But they make sacrifices for the sake of their children, so they expect their children to succeed.

As Russian-Jewish immigrants, there are certain reasons why they left. There was discrimination in the Soviet Union. There were certain positions that they weren’t able to attain. You come to Canada, which is absolutely free, and you have these opportunities. It doesn’t matter who you are if you’re willing to work. There are no quotas.”

It’s a sensibility Bezmozgis plans to put into his next project, an untitled novel about a young girl who flees the U.S.S.R. for Rome with a new life in Canada as her ultimate goal. In the meantime, his aspirations for Victoria Day are akin to those his parents had for him.

“Hopefully it lasts long enough that, years from now, other societies will look at it to learn more about life there,” he says. “Who knows? We’ll see.”