David Byrne and 349 of his closest friends put on Contemporary Color for Luminato Festival - TRNTO.com
Skip to content 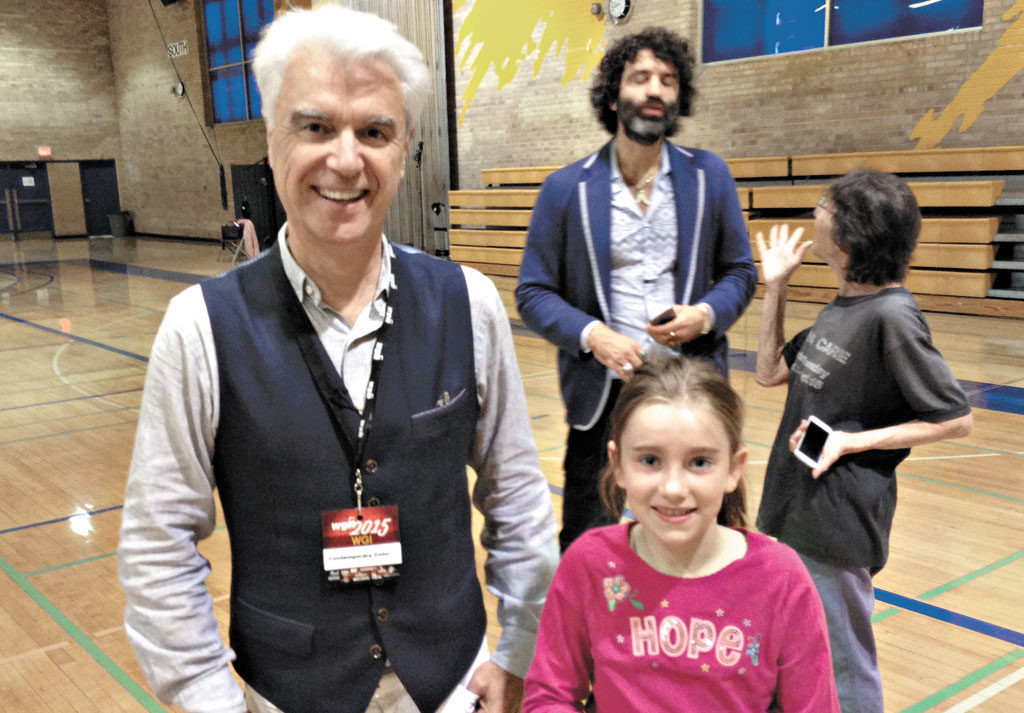 David Byrne is perfect for the Luminato Festival. He dreams big, far outside any box, and then finds a way to bring his vision to life. Case in point, the massive new work Contemporary Color, set to take over the Air Canada Centre on June 22 and 23 as one of the feature productions of this year’s festival.

The production features a 100-by-79-foot stage that will be home to more than 350 performers including some of the biggest names in music. St. Vincent, Nelly Furtado, Tune-Yards and Kelis, among others, will perform with 10 colour guard teams chosen from cities in the United States and Canada.

In May, Byrne, the iconic musician and founder of the band Talking Heads, was in Toronto to talk about Contemporary Color, and, really, just explain what a colour guard is.

“People stop me in the street and ask how did you come up with this and why?” he begins. “Well, actually they don’t. But, they will!”

According to Byrne, the idea began when a colour guard team requested permission to use a piece of Byrne’s music for a performance. He said sure but asked for a video to see what they did with it.

“A door opened to a world I didn’t know existed,” Byrne says.

“That world evolved out of the routines and things we associate with marching bands and drum lines during football season. After football season, some decades ago, someone said, ‘Let’s move it indoors and get a little more creative with it during the winter months.’ ”

Now, apparently, there are teams competing around the world.

“When I saw it, it was this incredible flowering of creation out there in the middle of the continent that I’m completely unaware of,” he explains. “And I thought what if, instead of pre-recorded, what if there was live music, and what if it was some of my favourite music. Not necessarily me, but music I know and I’m a fan of. And that’s it.”

Perhaps not completely surprisingly, Byrne admits that a few cultural institutions did not jump at the opportunity to be involved with the production, but he’s glad it found a home both at Luminato as well as the Barclays Centre in Brooklyn where it will travel after Toronto.

“Why Luminato? Well, they seemed interested, so why not?” says Byrne.

“If you could imagine, there were a few institutions I approached that turned this down, believe it or not. They were kind of like, uh what?”

There were a few musicians, though, who knew of colour guard, such as Annie Clark (St. Vincent) who grew up in Oklahoma and Texas where it’s a big high school activity.

“Not everyone said yes,” says Byrne. “And sometimes for practical reasons: ‘No, I’m on tour,’ or ‘Can’t make the time commitment.’ But we’re really thrilled with these people who are deeply embedded in a world they didn’t know existed.”

Each artist has been paired with a colour team to work on their performance. Nelly Furtado is partnered with a team from Kitchener, which was on hand at the media launch to provide a little demonstration.

Byrne is working with a team from Montreal.

The details of the production are a bit hush-hush, but expectations are high.

“This is a little hard to describe, but maybe people will say, ‘Oh yeah, it’s going to be an amazing visual spectacle,’ ” says Byrne.

Let’s go with that.