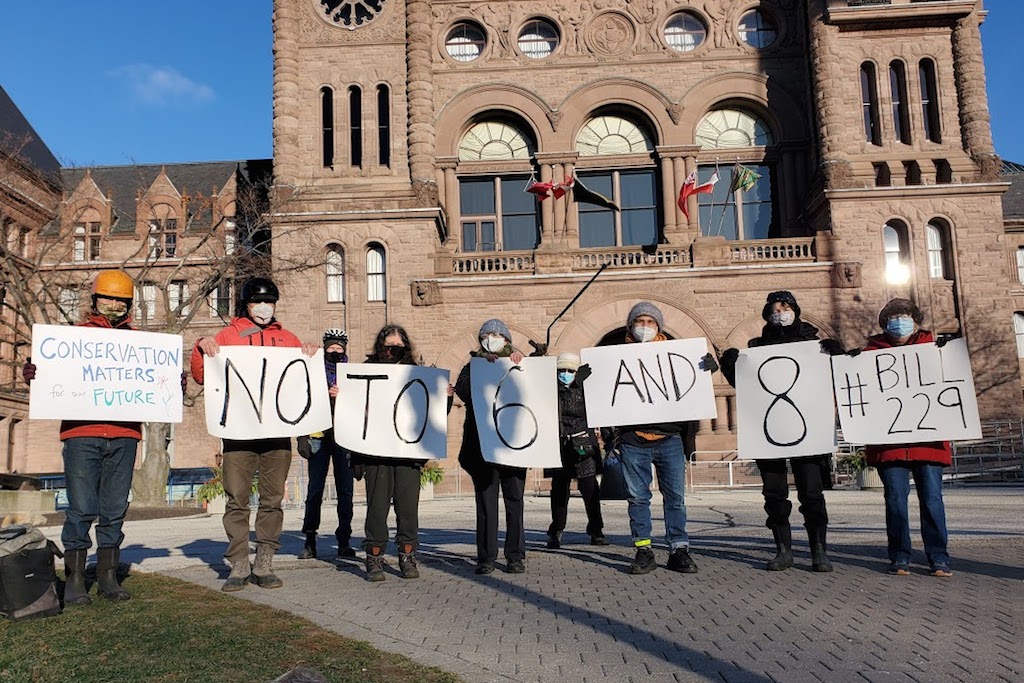 Environmental agencies and advocates alike continue to sound alarm bells over the provincial government’s plans for future conservation. Those critics include the former mayor of Toronto and a long-standing conservative David Crombie, who abruptly resigned from a provincial advisory panel specifically tasked with providing planning and land-use recommendations on the Ontario Greenbelt for the Ford government.

This morning, Dec. 8, there was a small, COVID-safe protest at Queen’s Park to take the message of stopping the attack on conservation by the Conservative Party of Ontario and calling for the protection of key wetlands against big development as well as opposing a permanent exemption for logging operations from the Endangered Species Act.

“The Endangered Species Act is there to protect vulnerable wildlife,” said Katie Krelove of the Wilderness Committee, one of the organizers of the protest. “These changes are merely the latest in a long line of attacks on environmental protections by the Conservative government, all in the name of ‘cutting red tape.’ They are pandering to big developers and industry at the expense of the health and safety of everyone else.”

Last week, along with Crombie, six other board members of the Greenbelt Council submitted their resignations and expressed grave concerns over planned legislative changes they fear will seriously undermine efforts to keep the 7,200-kilometre Greenbelt network of provincially protected green space and wetlands free from private development and governmental intrusion.

Of key concern are Schedules 6 and 8, contained within Bill 229 the government’s proposed “omnibus” budget legislation for COVID-19 relief. If passed, it would ease the stringency of the provincial environmental assessment process required for provincial approval of large-scale construction projects.

“This is not policy and institutional reform,” writes Crombie in a letter sent last weekend to Ont. Municipal Affairs and Housing Minister Steve Clark, Premier Ford and other senior cabinet members. “This is high-level bombing and needs to be resisted.”

A Saturday evening #onpoli shocker: the chair of Doug Ford’s Greenbelt Council, former PC MP David Crombie, has resigned over changes to conservation authorities. Calls them “disastrous, and “high-level bombing” that “needs to be resisted.” pic.twitter.com/qG1ZqhyuUW

While the Ford government has pledged not to allow development to take place within the Greenbelt, Gray is still concerned the Schedule 6 provisions will seriously undermine provincial protections already in place. He urges the government to listen to the criticism and scrap the plan.

“We hope they listen to the unanimous condemnation of this proposal and rethink it,” said Gray. “It clearly wasn’t well-considered, so perhaps now that there is overwhelming resistance they will reconsider.”

Ok, I give up. I am not writing any more long-winded press releases about the hot mess attack on C.A.s when I can just cut and paste this. #ConservationMattters #ONpoli #RemoveSchedule6 Help stop it at: https://t.co/TktIi1oJQu https://t.co/Eb80hDXDAc

Gray is not at all impressed by a funding commitment of $30 million over five years, as part of Bill 229, for wetlands protections within the Greenbelt, announced Monday by Ont. Municipal Affairs and Housing Minister Steve Clark.

“It’s clearly meant to distract from the public attention and the fact that [Bill 229] is actually going to mean the destruction of existing conservation areas,” says Gray. “This in no way negates or covers for the fact that they’re pushing so much destruction within the Greenbelt and the rest of the Greater Golden Horseshoe.”

One such entity, the Toronto and Region Conservation Authority (TRCA) admitted concern the bill will not only give elected officials the ability to overrule “evidence-based requirements” for EA approvals, but it will also allow the government to issue special Ministerial Zoning Orders to permit development to proceed apace without satisfying provincial requirements.

“This proposed bill includes language that would allow the minister to override conservation authorities’ science-based watershed approach to planning and permitting to one based solely on politics,” says Toronto Region Conservation Area board chair Jennifer Innis in an open letter to the government published this week. “This essentially gives control over to political lobbyists”.

A longtime conservative, Innis was appointed by the Ford government to chair TRCA’s non-partisan board made up of politicians and civilian appointees which oversees the management of some 3,500 km of green space across nine local watersheds.

“I appeal to everyone reading this letter to contact the Premier and your local MPP immediately to ask them to remove Schedule 6 from Bill 229 in advance of this week’s final vote,” wrote Innis in the letter.

Sharon Bider, of the group ClimateFast, attended the protest with her granddaughter.

“The Ontario public will not forget this,” she said. “It is a betrayal of future generations.”