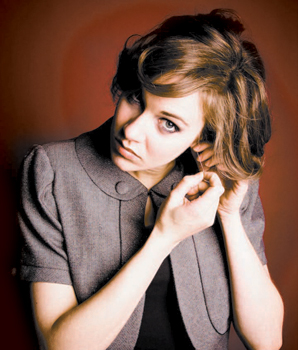 MEETING DAWN LANGSTROTH for an interview over spicy tuna rolls feels a little like a blind date.

All I know about the singersongwriter I learned from her website. She’s toured with the Rankin Family, performed at Roy Thomson Hall with John McDermott, written songs with Ron Sexsmith, recorded two fivetrack EPs and has a full-length album due in the fall. She paints — my knowledge of art doesn’t extend much beyond dogs playing poker, but her playful miragelike images, in a semi-cubist illustration style, Wikipedia tells me, are beautiful.

While her site listed no likes or dislikes (walks on the beach or black widow spiders, for example), there are plenty of photos, from stunning black-and-white portraits to candid girl-next-door snapshots. And there are tracks from her records: soulful pop songs tinged with a country music melancholy, failed relationship tunes “You Don’t Want Me” and “Elevator Music,” the jazzy uptempo “New York,” the more radio-friendly “It’s All Good.”

Among a handful of video clips is one of Langstroth in the studio recording “Mother’s Child,” a song with deep autobiographical significance. Langstroth is the daughter of the legendary Anne Murray and Bill Langstroth, who hosted the CBC musical variety series Singalong Jubilee in the ’70s. Langstroth sounds a lot like her superstar mother on “Mother’s Child” while on the other tracks her voice, at turns soaring and sweet and low and crisp, evokes Jann Arden, Shania Twain and k. d. lang with just a soupçon of Carole King.

Your mother is a musical icon, I begin, testing the waters. Did that give you any reservations about becoming a singer? Langstroth laughs, a good sign.

“You consider things, you certainly do consider,” she says with a wry smile, the corners of her mouth tugging downward ever so slightly. It’s her mother’s smile. “That’s the reality of it. People are always going to compare you to other people, judge you, no matter what job you do or who your parents are. And people might say I’m riding her coattails, or whatever, and it might be hurtful, but I can’t control that. I can only do what’s right for me.”

What’s right for Langstroth is making music (she sometimes writes while watching TV) and painting (her father taught her to draw when she was young, and it’s become something of a second profession for her). “There’s part of me that wants to be honest and real in as much of my life as humanly possible, to be as authentic with myself and others as possible,” she says. “The more yourself you are, the more people will relate to you and the music.”

For the next 45 minutes, over bites of sushi with lots of ginger, Langstroth talks about life, music, art and growing up in Thornhill. It was a “pretty normal” childhood, she says, aware how strange that sounds, given who her mother is.

She loved to hang out with her friends at the Promenade Mall, down burgers and fries at Lime Rickey’s. “With the little jukebox at the table, that was the greatest thing ever. I think they tore it down, and there’s a Mercedes dealership there now,” she says with a laugh.

Langstroth laughs easily and often, as when she recalls her first public performance. As a stand-up comic. When she was 11. “That was interesting,” she says, drawing out the word in the way someone who’s spent a lot of time on the East Coast often does. “I did it for school. My mom and dad helped me write the jokes, making fun of teachers, mostly. I thought it would help me gain friends.” She pauses. “It didn’t.” Ba-dum-ching!

Not that the conversation doesn’t occasionally turn quite serious. Langstroth has battled anorexia and was the subject of a People magazine story 10 years ago when she was 20. “I was really sick for a lot of years,” she says. “But my family helped me get through it. You do what you gotta do. You just go on, you keep fighting, doing what you do.”

Langstroth says she didn’t plan on becoming a singer, even though there was always music in her home growing up. She toyed with modelling for a while, but ultimately, she thought she would be an actress. “I was at Young People’s Theatre for a long time, and I have auditioned for things since then,” she says.

But, to employ a cliché, music is in her blood. “I started writing music at 18 or 19. I used to write poetry. I’m sure I’ve written some really horrible poetry, and the music came from there,” she says.

Langstroth is a fan of Sheryl Crow and Nirvana and Aretha Franklin, but if there’s one song she wishes she’d written, it’s “What’ll I Do,” by Irving Berlin. “It’s the greatest. So simple,” she says. The key to a great song like “What’ll I Do,” she says, is that everybody can find their own meaning in its lyrics and melody.

Surprisingly, as honeyed as it is, a lot of her own music is inspired by things that tick her off. When I mention that I don’t really hear any “Jagged Little Pill”s among her music, she retorts, “Did you hear ‘Dark and Twisted’?!” Sure, that country-bluesy song is a bit dark and, um, twisted, with its deliciously vengeful tale of being done wrong, voodoo dolls and pins and knives and such, but mostly, Langstroth is as cheery offstage as she is on.

“I think the happiness onstage for me is when I’ve gotten things right, hit the notes I wanted to,” she says. “There was a performance with my mom in Ottawa, and I got an embarrassingly long ovation, and I didn’t know what to do. I started to cry. It was a really strange, wonderful experience.”

For the next hour, we talk about the really important stuff, our favourite Simpsons episodes and movies. Langstroth mentions her awesome aunt Ethel, marvels at the hilarity of the criminally underused Catherine O’Hara, raves about the latest Coldplay album — “I just wanted to hear it non-stop, I hope people find that with mine” — and the best-selling book Pride and Prejudice and Zombies (“How funny is that premise?!”), and waxes about the joys of Twitter. While her mom is currently writing her memoirs, Langstroth is sharing her life with friends and fans in 140-character installments. “It’s so addictive,” she says. “And such a great way to just keep in touch with people.”

In 1973, pioneering rock critic Lester Bangs famously gushed over Langstroth’s mother. Without a trace of irony or hint of sarcasm, he wrote that Murray possessed a smoldering sensuality and that her music was “about SE- X with a capital X.” I’m curious what Bangs would’ve thought of Langstroth, but I suspect he would’ve had a bit of a crush. Listen to her music and you just might, too.