Dean and Dan Caten of fashion powerhouse Dsquared2 on growing up in Toronto and building a global brand | TRNTO.com
Skip to content 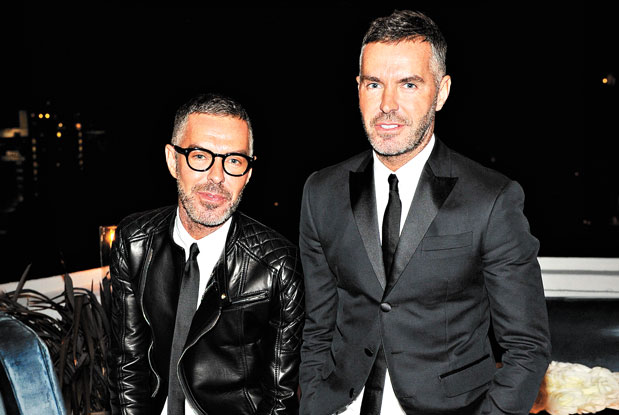 “Born in Canada, living in London, made in Italy,” is how Dean and Dan Caten describe their powerhouse fashion line, Dsquared2.

In February, the 49-year-old identical twins were in Toronto for the inaugural Canadian Arts and Fashion Awards (CAFA) where they were presented the International Designer of the Year Award as well as recognized for their “outstanding achievement.” Growing up in Toronto’s Willowdale neighbourhood, their journey has been anything but ordinary.

Even from a young age, the Caten brothers knew that they wanted to be involved in fashion. The youngest of nine children, they started designing clothes for their five sisters as kids, catering to various music niches — the disco queens, folk singers, and the rockers.

They attended Northern Secondary School on Mount Pleasant in Toronto’s north end — a school with a sterling reputation for its excellent academic and sports programs. (Other notable alumni include Rock and Roll Hall of Fame member Bruce Palmer and former CNN business correspondent Ali Velshi).

“We come from a little neighborhood and had a difficult childhood,” the Catens explain. “We weren’t the smartest kids and had a knack for getting in trouble, but one thing we had going for us was that we were driven. It was that drive that pushed us to where we are today.”

In 1983 they made the big move to New York to study fashion at Parsons The New School for Design, an institute known for pumping out some of today’s best and brightest, including Marc Jacobs, Alexander Wang and Tom Ford.

The Catens left Parsons after a semester and returned to Toronto to continue honing their skills, launching their first womenswear line, DEanDAN in 1986.

In 1988, they were appointed as creative directors of Ports International (now, Ports 1961) working closely with founder Luke Tanabe. Though they enjoyed working with the brand, they had their sights set on Milan.

“Eight years after returning from Parsons, we decided to make the big leap and fulfill our dreams in Italy.”

In Milan, the twins learned about the industry first hand working with such fashion bigwigs as the late Gianni Versace and Diesel, which is considered one of the country’s best purveyors of quality denim, something the twins have a knack for. This is undoubtedly an ironic turn of events, considering they were forced to wear dress slacks as kids every day because their dad associated denim with not having enough money for proper clothing.

In 1994, they launched Dsquared2, which not only showcased their talents in the denim world, but also gave them an outlet for creating the cheeky-meets-elegant couture clothing they are now best known for. Like most self-titled brands, the aesthetic of Dsquared2 is very reflective of how the Catens see themselves.

“Canada is our birthplace and a major source of inspiration for us,” they explain. They developed a strong appreciation for craftsmanship and quality from their exposure in Milan and paired that with their proud sense of patriotism when creating their collections. On their website, they describe the brand as “an intelligent mix of irreverent Canadian wit and refined Italian tailoring.”

A great example of this ethos was the 2013 fall menswear presentation in Milan where models strolled down the runway wearing Mountie hats and crisp double-breasted blazers as if to best iterate the concept.

When they’re not playfully poking fun at their Canadian heritage, they tend to focus on fun in general. Ask anyone who has ever witnessed a Dsquared2 runway show, and they will tell you that the twins are anything but conventional. They love their theatrics, and usually, the campier the better.

They’ve done everything from a wild west hoedown in 2006, Charlie’s Angels in 2009, music festival fashion in 2012 and, most recently, what Style.com writer Tim Blanks described as “lunatic glamour” for their womenswear 2014 fall presentation.

The theme was centred on glamorous women who have ended up in the psych ward with DIY haircuts inspired by Girl Interrupted, and models were escorted down the runway by teams of nurses. It was memorable, to say the least.

Music has also played a major role in presenting Dsquared2 to the world. Big name artists, like Rihanna, have performed at their runway shows, and they have created entire wardrobes for the musical world tours of Madonna, Britney Spears and Beyoncé.

Regardless of their successes, the Catens will always have a soft spot for home. For the Vancouver 2010 Winter Olympics, the duo returned to Canada to design the opening and closing ceremony outfits and took part in the Olympic torch relay.

This year marks the 20th anniversary of Dsquared2’s inception as a line, which now includes accessories, footwear and a fragrance.

Last spring they launched their first kids’ line, suitable for up to age 14, in response to a demand from clients for “cool and fun outfits” for the entire family. Footwear for children is also in the works with the brothers teaming up with Italian shoe designer Andrea Montelpare.

Despite their penchant for success, the Caten brothers seem incredibly grounded and not at all like the clichéd snobby designer types our media-fed minds are used to seeing on television and in movies.

And not only are they proud brothers, partners and identical twins, but they are unabashedly Canadian. They dress alike, are always smiling, constantly finish each other’s sentences and are the first ones to celebrate their heritage, proudly waving the red and white flag whenever they are given the chance.