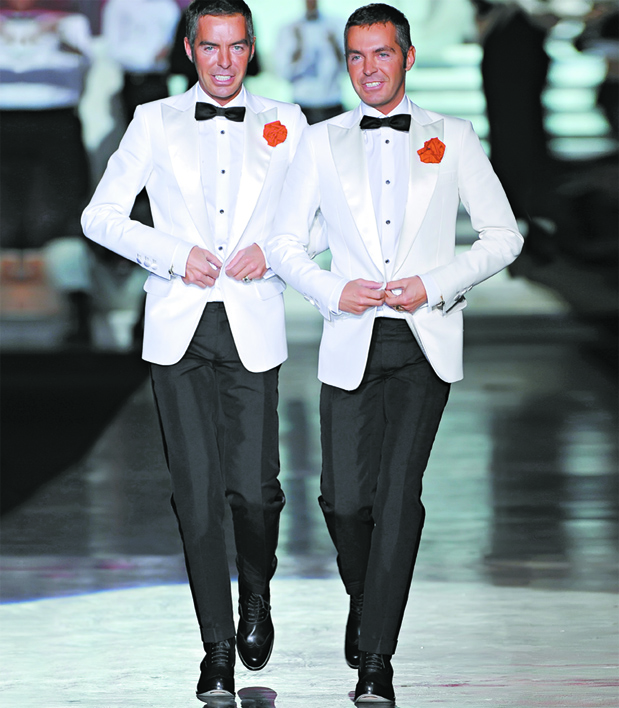 For a decade and a half, Dean and Dan Caten, identical twins from Willowdale have dominated the catwalk with their world-renowned clothing line DSquared2. Now they’ve done the same with a sidewalk.

Mind you, it’s not just any old promenade. The Caten brothers were immortalized in their home and native land with a star on Canada’s Walk of Fame on Sept. 12 at the Four Seasons Centre for the Performing Arts. It’s a long time coming for the Catens, who are often mentioned in the same breath as Gianni Versace, Jean Paul Gaulthier and Oscar de la Renta.

But Dean and Dan haven’t always lived their lives in the lap of glitz and glamour. Born Dean and Dan Catenacci, the brothers grew up in a crowded house on Otonabee Avenue, a suburban stretch south of Steeles Avenue between Yonge Street and Bayview Avenue. As the youngest of nine children with no mother to speak of (Dean does not volunteer the reason why), money was tight and space was even tighter.

Their father, a Neapolitan pipefitter and welder, encouraged curiosity during their upbringing, one in which the twins quickly learned that you earn what you get and you cherish what you have.

“We grew up in a medium-poor household,” says Dean on the phone from Milan, Italy, where the brothers now live. “We were quiet as kids in the sense that we were kind of the have-nots and we were surrounded by the haves. We didn’t have a lot of means. We had something inside us, I think maybe God-given, a sensibility to the job that we’re doing now — because you can’t learn good taste in school — and ambition. And I think the less you have, the more you want. In that sense, it puts a fire that burns under your ass to ensure that you can do it. We have a successful business now as a result of that, and when your country acknowledges that, it’s great.”

Dean and Dan got their academic education at Lillian Public School, Northmount Junior High and various other secondary institutions after that. But the twins credit their father for the creative streak that guides their hands-on work. A natural craftsman, Dad built the house on Otonabee and designed jewellery on the side for his girlfriend. Dean also recounts his father building a sculpture of an eagle on his front porch. (“Not practical at all but very beautiful,” he says, laughing)

“He was a very creative guy and we get a lot of it from him,” Dean says. “Dad would give us presents and ask us, ‘How did they make it, and how do you make it better?’ So we grew up to be our father’s sons by asking the same questions about fashion. Why am I wearing this? Why am I not wearing that? What qualities does this garment have? What is it about this piece of clothing that makes you want to keep putting it on? So it comes from the heart. We’re very real about what we make. We don’t pretend.”

It’s that sense of genuineness, forged during their youth, that brought the brothers to the top of the fashion world and keep them on their game, says Dean.

In 1991, the brothers moved to Milan seeking work in the fashion industry, but it wasn’t until 1995 that they unveiled their own label, DSquared2, at their show Homesick Canada Collection. The next year the pair created the collection Napoli, inspired by their father’s hometown.

Dean will be the first to admit that it’s all too easy to get a swelled head when your circle of friends and clientele includes such A-listers, but they never forget about home, and their work reflects it.

“We take realness with us,” Dean says. “It’s what sets us apart from the superficial people who live in the world that we live in. We’re very down-to-earth. We’re very appreciative and thankful that we made it. There’s nothing superficial about us. When we go home, our family treats us the exact same way that they did before we became famous. We’re still the babies. We’re still called “the boys” — and I’m 45 years old.”

Indeed, family has been with them throughout. When the brothers opened up a 500-square-metre store in Milan in 2007, they even had a say in designing the architecture of the shop. Dean points to that moment as the zenith of the brothers’ successes.

“The first show we ever did was cool and everything, but the biggest clincher for us was opening up the monogram store in the heart of the shopping district,” Dean says. “I cried when I first came into the store. I just thought, ‘Wow. We’re here now and we’re not going anywhere.’ We’ve seen a lot of other friends and designers come and go, but we were fully planted in this city with this huge beautiful shop that looks like nobody else’s, a store that represents Canada, Italy and who we are. It’s something that we can be proud of.”

You’ll witness more of the Catens’ work at high-profile events in the future. The twins are currently drafting outfits for the opening and closing ceremonies of Vancouver’s Olympic Winter Games in 2010. The Catens are also sketching three-piece travelling outfits for Spanish club Barcelona FC to wear at press conferences. “It was supposed to be a secret,” Dan says with a laugh. “Oh well, it’s out now.”

But before they move on with those projects, Dean and Dan will take some time out to bask in the glory Canada has been lavishing upon them.

“It’s amazing,” Dan says. “I think honestly, it’s one of the most overwhelming awards we’ve ever received in our career. To understand that your country respects and appreciates what you do is a huge honour. We’re always waving our flag. It’s what makes us and our work unique, and it’s great when your country backs you up. We’ll live forever, in a way. We’ll both be gone, and that star will still be there on the sidewalk giving inspiration for young kids.