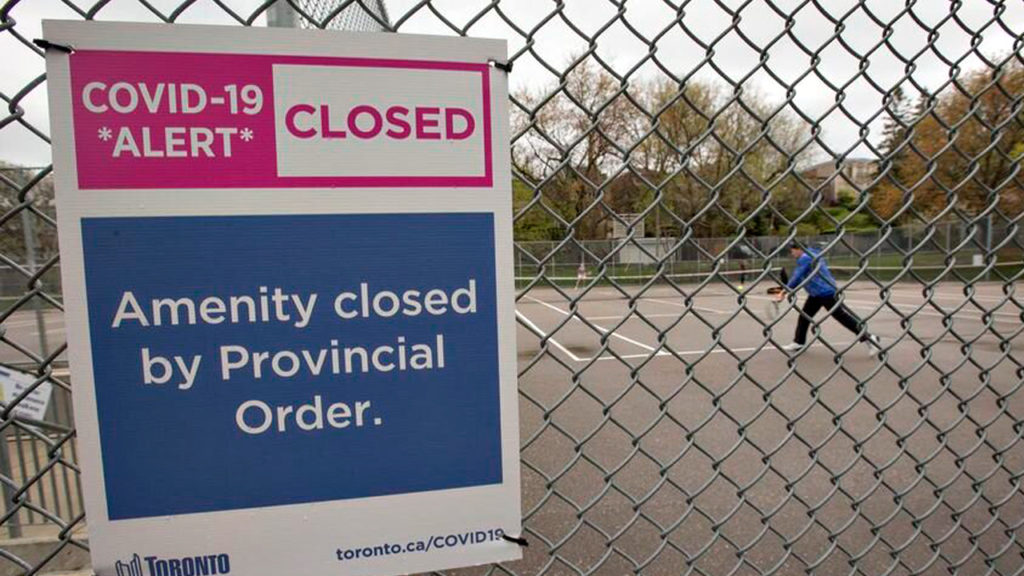 Volleyball Canada national team member, Sophie Bukovec, was asked to stop training at Woodbine Beach by a Toronto police officer on Saturday. No fines were issued, but the incident incited heated discussion on COVID-19 restrictions.

A photo of the incident posted on Twitter by Canadian Press photojournalist Frank Gunn garnered strong reactions on social media from various public officials and citizens.

A #Toronto Police Officer asks Volleyball Canada national team member @bukovec_sophie to stop training on the beach while Lakeshore Blvd 50 meters away is open for #ActiveTO . Facilities for high performance athletes are closed by the @fordnation #stayathomeorder for #COVID19 pic.twitter.com/0nDhzTpjna

In a previous tweet, he wrote, “during this pandemic, outside together is simply better, safer and healthier than inside. If you’re able to, please enjoy the great outdoors.”

Matlow doubled-down on his commentary regarding public use of outdoors, in a tweet directed at Toronto’s medical officer of heath Dr. Eileen de Villa.

“I deeply respect Toronto’s Medical Officer of Health,” Matlow wrote. “But for elected councillors never to question her, or even disagree with her based on advice of other health experts, is wrong. Dr. de Villa’s opinions are very important-but they’re not written on tablets found on Mount Sinai.”

He followed-up on his comments hours later, placing them in the context of outdoor activities to be enjoyed safely by Torontonians.

My concern stems from the recent debate over the use of public parks during this pandemic summer. I support the ability of responsible adults to enjoy a drink together outdoors in a park because of two main factors- equity (not everyone has a backyard) and public health (the…

In his post, the photographer Gunn said the incident took place 50 metres from Lakeshore Boulevard, where the eastbound lanes were open for the first day of ActiveTO — a city initiative that allows people to walk, run, and bike while maintaining physical distance and remaining active.

Mayor John Tory commented on the situation during a CP24 question period on Sunday, when he said that he wasn’t aware of all the details, but recognized the difficulties that police and bylaw officers faced when using their discretion.

Currently, outdoor recreational facilities such as golf courses, baseball diamonds, soccer fields, tennis, platform tennis, basketball courts, skate parks and other facilities remain shut down. Many organizations across the province have lobbied to try to get the facilities reopened.

For instance, the Ontario Tennis Association (OTA) wrote a letter outlining its position and asking for the province to reverse its decision.

“While the Ontario Tennis Association supports the Province of Ontario in its fight to control the spread of the COVID-19 virus, we respectfully ask that it reconsiders its decision with regard to the closing of the province’s tennis facilities,” wrote the OTA, in a statement. “In light of overwhelming evidence from the medical community that pursuing outdoor activities while practising safe physical distancing is safer than remaining indoors when it comes to the spread of the virus; and given that the province’s tennis clubs and academies have excelled in enforcing COVID-19 protocol over the past 12 months, the association feels that the Province of Ontario should reverse its decision to force the closure of the province’s tennis facilities ASAP.”

That sentiment was also supported by many in the medical community.

Irfan Dhalla, vice-president of Unity Health Toronto and associate professor at the University of Toronto chimed in on Twitter.

We need to invest in public health to end the pandemic. https://t.co/DjMH73omGT

Some Ontario residents are also upset by the current COVID-19 restrictions.

Over 40,000 Ontario residents have signed a petition calling for the Ontario government to reduce restrictions on safely distanced outdoor activities.

In the petition description, organizer Dave Harris warns that without the option for outdoor activity, “people will instead participate in risky indoor activities out of public view, which will spread the COVID virus to new networks of people.”