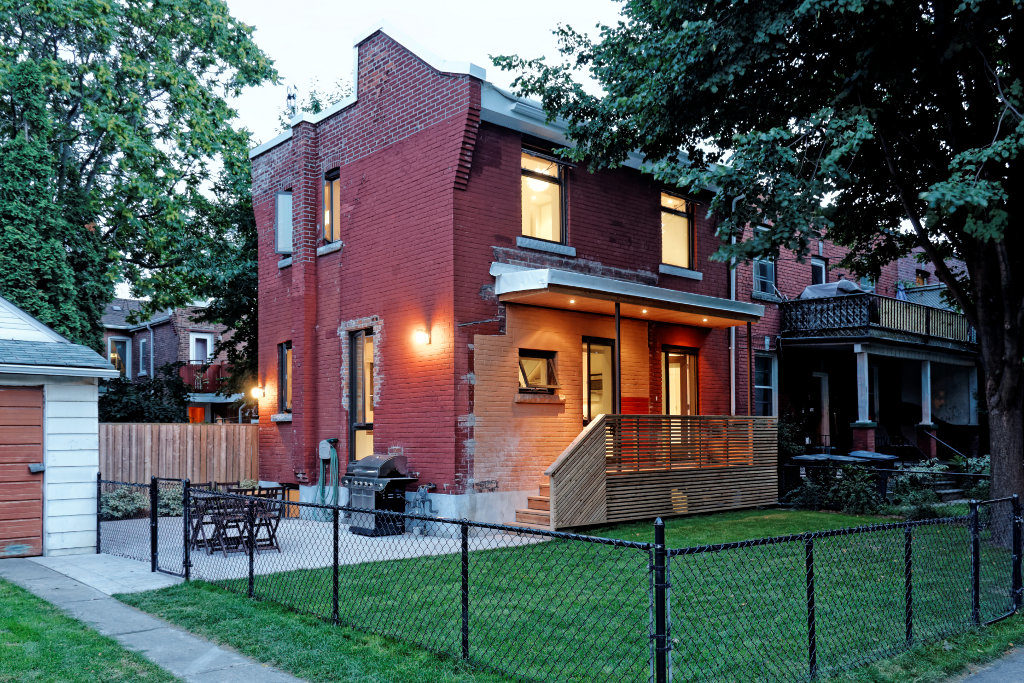 Huddled around your radiator in the dead of winter? Living without water for three days due to frozen pipes?

Even if you aren’t an architect, Tom Knezic and Christine Lolley, the principals of Toronto-based sustainably focused design firm Solares, believe that you shouldn’t get used to being cold (or uncomfortable) in your own home. “It doesn’t make sense. Why are people living like this?” Lolley asks. “We need to demand better performance from our homes.”

Whether it’s a multi-unit building or a single family dwelling, the philosophy of the firm, which is celebrating its 10th anniversary this year, is sustainable, residential design.

The couple – he is 40, she is 37 – like to joke that if they put all their clients in a room together, they would all get along so well even if their aesthetic is different. The commonality? Energy efficiency.

Still, Lolley admits that it’ll be user experience rather than moral obligation driving this dialogue about what it is that people are looking for when they buy a house, which, as she points out, affects our ability to work, to sleep and to be happy. Right now, the real estate market has prospective homeowners focused on a checklist (number of bedrooms? stainless steel appliances? stone countertops?), she argues, but the quality of those spaces is not discussed.

What if energy audits became a mandatory part of listings? And when might that day come?

Well, the idea of green – that is, building energy efficient homes or, to take it one step further, renovating fixer-uppers rather than demolish them – is already a popular trend in architecture. “You can’t just go out and buy a better house. You have to create it for yourself,” Lolley says. “We help clients meet that vision.”

A few years ago, the parents to two young children realized that they’ve been designing great homes for people, but not living in one themselves, so they “put their money where their mouth is.” They were also tired of living in a one-bedroom apartment above their Solares office at College and Dufferin streets. Though “communal,” they had a vision of a house with a yard (no, not a white picket fence, but a black chain link fence). 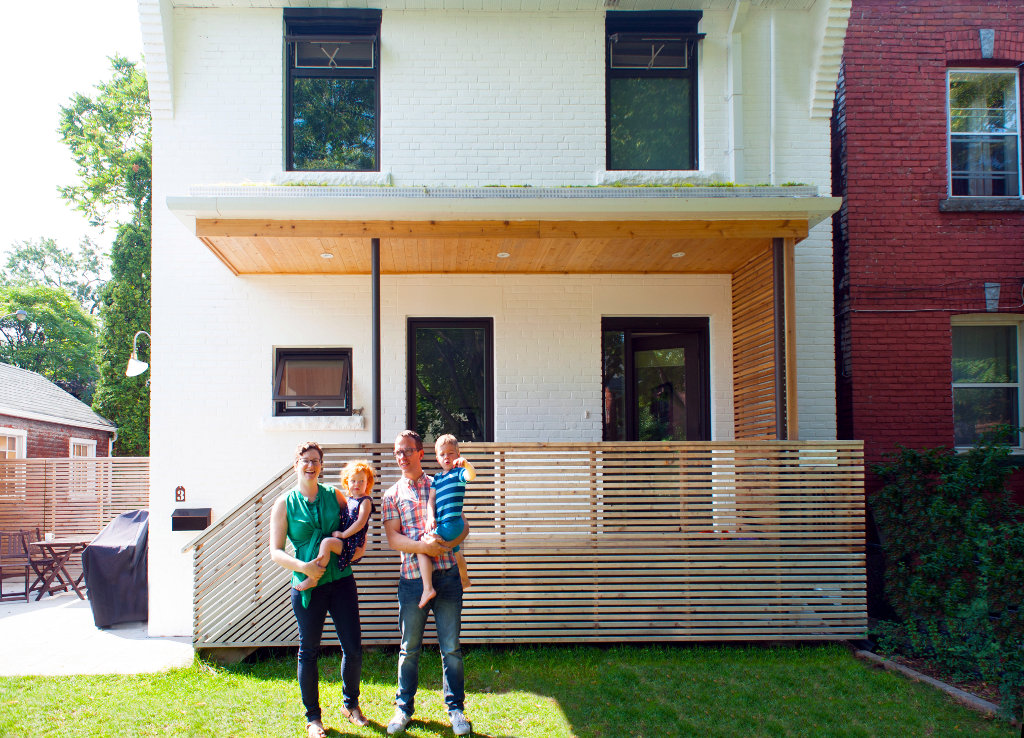 Both attracted to "oddballs," Knezic and Lolley snatched up a 900-square-foot, two-storey detached red brick house on Columbus Avenue near Sorauren and Dundas in Roncesvalles Village (something of an anomaly in the neighbourhood, where large behemoths can be found in droves). Located within walking distance of their office, the “spooky and grotty” century-old house came in its original state (translation: completely unrenovated), which was necessary for their “deep energy retrofit.” The price tag: $750,000 (then relisted at $700,000). The negotiated purchase price: $680,000.

Lolley recalls four tiny rooms on the main floor, crappy old windows, a low-ceilinged, old-fashioned basement (small, scary details: a big oil tank, plus a toilet on its own in the corner) and a front and side yard instead of a backyard, sitting on a square-shaped lot. “It was unattractive, but perfect for us: a new house in an old brick shell,” she says. “Ugly we can handle, ugly we can take care of. As designers, we know how to take ugly and make it beautiful.” 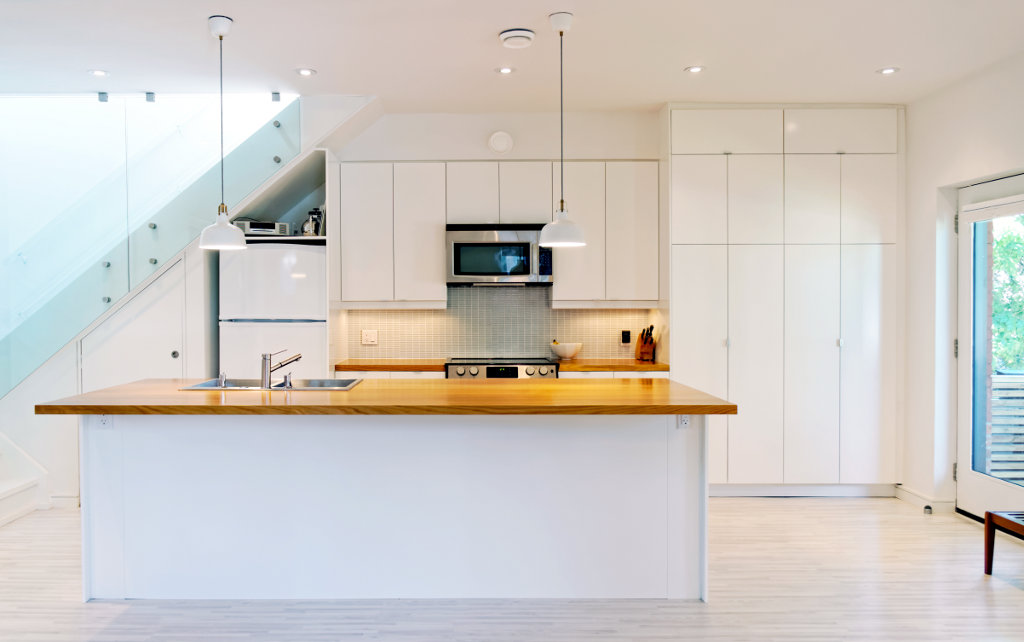 And that’s exactly what they did after a major gut-job, which began with an ecoENERGY audit in July 2013, the same month they took possession. With an initial score of 38 out of 100, Knezic and Lolley set out to make it a high-performance house (in other words, well-insulated and airtight).

They used a steel structural beam to open up the 450-square-foot main floor into an open-concept space with a kitchen, dining room and living room all in one. Load-bearing walls can only be found on the second floor, which houses a shared family washroom (with laundry facilities) and three bedrooms (a master bedroom, a bedroom for their two young kids and a guestroom, which doubles as a playroom). Six inches of insulation on the roof creates a tighter envelope, while a skylight over the main staircase, which was moved from its original location, ensures passive ventilation. And with an all-white interior and new triple-glazed, fibreglass windows throughout, the small space feels bright and airy. 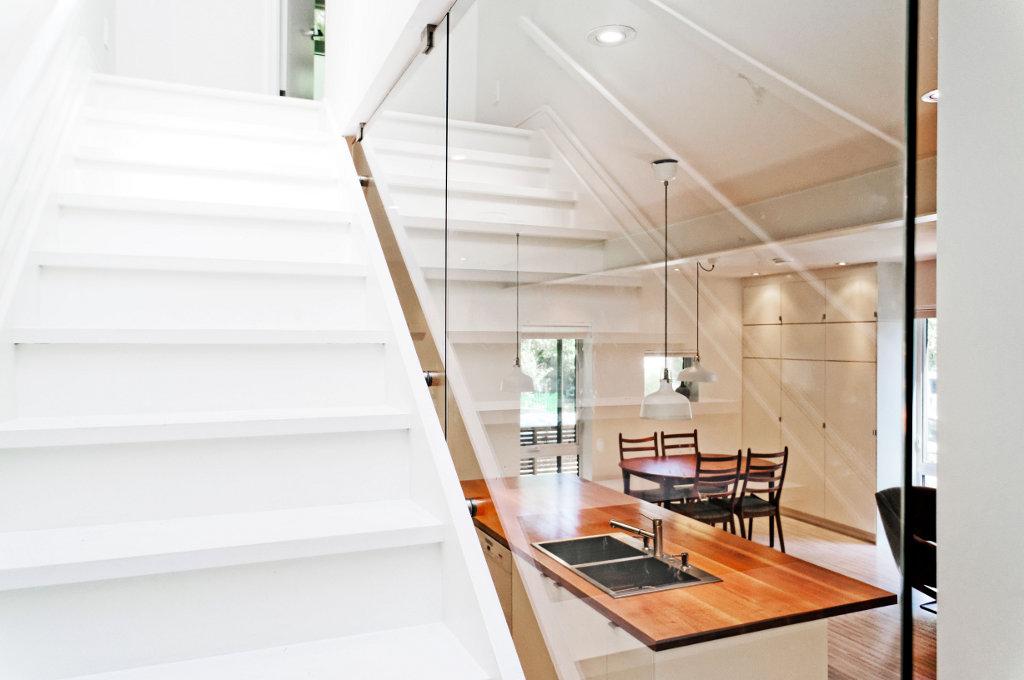 Outside, the brick exterior, which had previously been painted red, got refreshing dabs of white paint. The ugly porch was replaced with a slim platform featuring a green roof and the front lawn was regraded with new grass (so it could serve as an extension of the living room; hello, birthday and dinner parties!). To top it off, they dug out the basement to create a self-contained 450-square-foot rental apartment with 8.5-foot ceilings.

Nine months and $325,000 later, the home now uses 84 per cent less energy than it did before (that’s an ecoENERGY score of 83), with an annual greenhouse gas emissions reduction of about 15 tonnes (or, as Lolley puts it, “five to six Honda Civics”). The best part: lower energy bills and higher comfort levels. What is that but not beauty? “Now, it just feels like our cozy little nest,” Lolley says. “It’s modern without being overly serious: an urban cottage with soft, warm touches. It’s kind of young and playful, which is suitable for a house with young kids.” 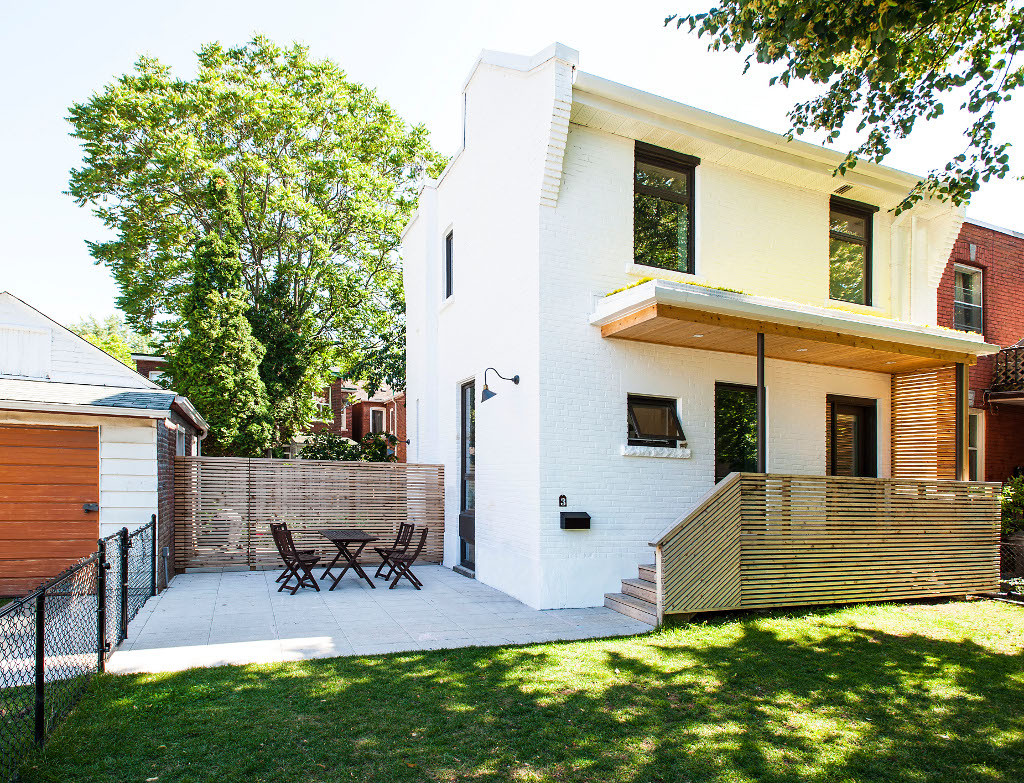 Here, the happy couple holds tours to show clients what Solares homes are like (hint: cohesive, clean and consistent spaces) in terms of thermal comfort (think calm and cozy). Imagine no sound, no drafts, no cold (or hot) spots, no air blowing.

Still, it was always meant to be a five-year house. And with the kids getting big (their son is five, their daughter is three), they have already started searching for their next “oddball.”

Nerd out on their full renovation on the Solares blog.