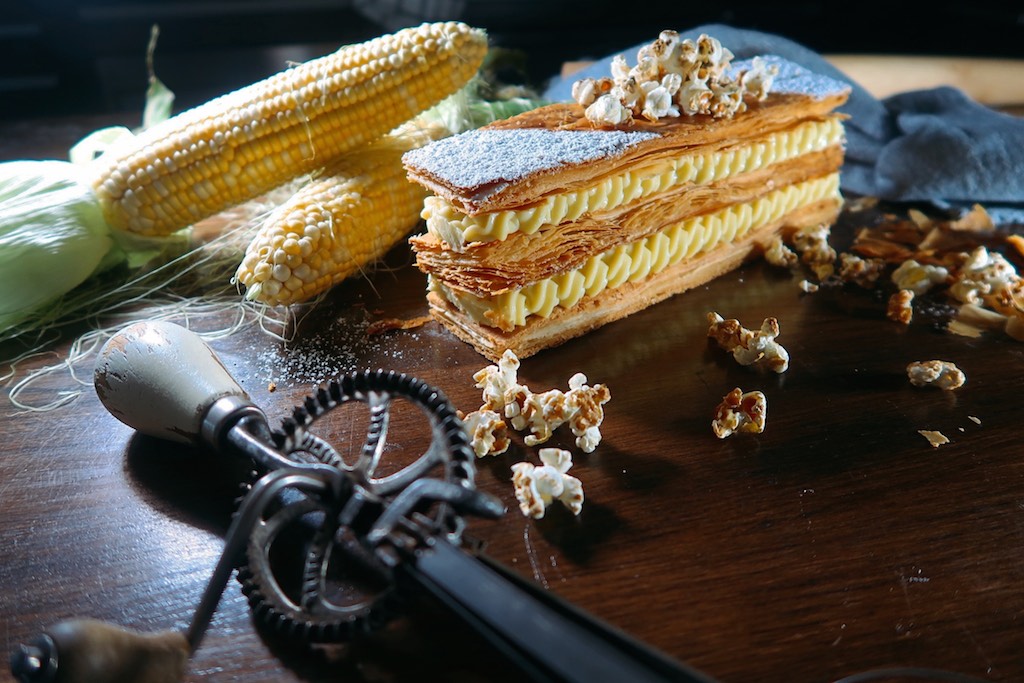 A new dessert pop-up at Hailed Coffee in Riverdale will feature a signature monthly dessert created by the duo behind the new pastry company Hawker, Farzam Fallah and Louis Lim. Their August creation is a caramel corn mille-feuille, available for pre-order and ready for pick-up on Wednesday, Aug. 26.

Fallah has years of experience as a pastry chef under his belt, most notably at Black Sheep Restaurants in Hong Kong and Richmond Station in Toronto, where he worked with Lim. But when he returned from Hong Kong in 2018, he decided he wanted to learn more about how restaurants work as a whole and has since been working as a bartender.

However, when COVID-19 hit, Fallah had more free time on his hands, and four months into quarantine, he and Lim decided they’d try something new to give themselves something to do.

“We thought, why don’t we think of something and just do it, whether it doesn’t turn out right or we don’t sell anything, let’s just do it for fun and see what comes of it,” Fallah says. “So we just called up a bunch of friends to find a professional kitchen space because we didn’t want to do it out of our homes.”

That’s where Hailed Coffee stepped in. Their pastry chef, Royce Li, told Fallah and Lim they could use their kitchen space to sell out of.

“From my previous experience, all chefs have been very open and welcoming. I remember the first week I worked for a pastry shop, the chef told me, ‘Here’s the keys, just lock up when you’re done,’ ” says Li. “So I think we have to have the same approach. So if anybody doesn’t have the space, they can use this space instead. We are going through a pandemic, so any little bit of money helps.”

Fallah says their idea is to centre each monthly dessert around a different ingredient, and the ingredient this month is corn because August is heavy corn season.

“The dessert itself is a classic mille-feuille with layers of puff pastry and pastry cream, and we wanted to incorporate corn as much as we could. So we infused the pastry cream with corn kernels that have been roasted. We’ve made a salted caramel that we hit with bourbon, which is also made from corn, and then sea salt and popcorn to finish it off,” he says.

They’re aiming for a “salty caramel corn” kind of flavour profile. Fallah and Lim decided to create 50 pastries available for pre-order, and he says they’ve sold most of the portions by now, with a few still available.

“With both Louis and I, we have a pretty good following within our community of people that are just interested and excited to see what we’re doing next,” Fallah says. “For me, since I came back to Toronto and stepped away from the kitchen, I felt like there were definitely a few friends and guests that were looking to see when the next time is for me to do something dessert related.”

Fallah says it’s been exciting for him to see that people want to support him and Lim in this new project.

Dessert pick-up will be available between 4 to 6 p.m. on Wednesday Aug. 26, and pre-orders can be made on their website. Stay tuned to the website to find out what next month’s creation will be.