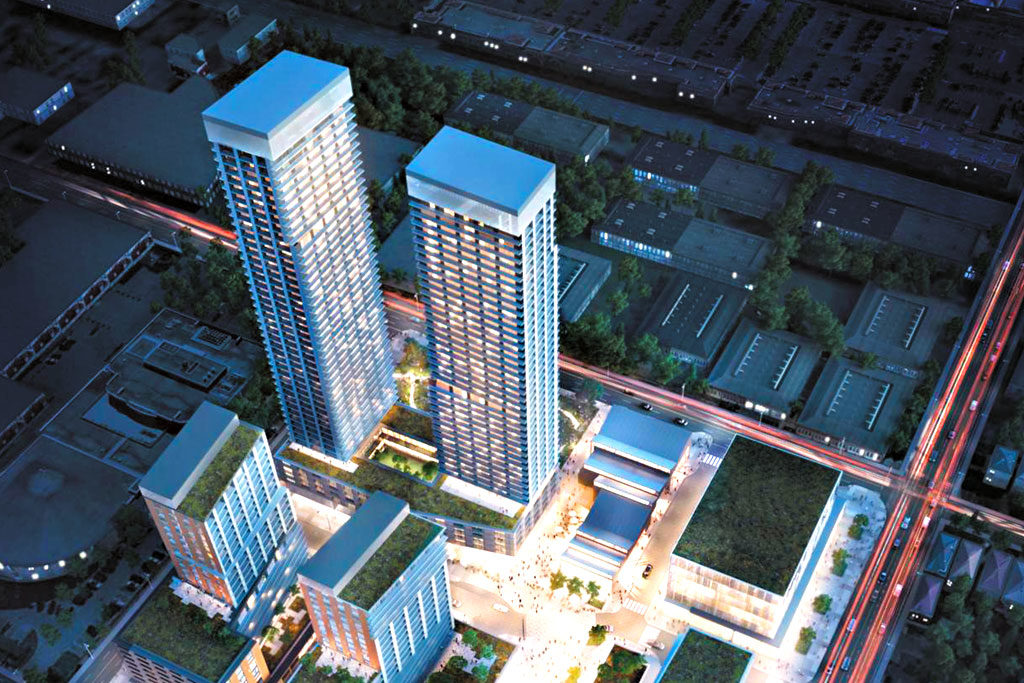 A large development proposed for Leaside may get even bigger now that an application for the site at 815 Eglinton Ave. E. (near Laird Drive) has been revised and resubmitted to the city.

RioCan, the developer on this project, is seeking approval from the city to build 1,655 new residential units on the site, which is 200 more than initially proposed in 2016. This means four new mid-rise buildings, with heights of six, eight and 10 storeys, and four highrise towers of 18, 21, 36 and 38 storeys. The development will also include a new public street, a public park, some retail shops and a community centre.

“It is huge,” said Geoff Kettel, co-chair of both the Leaside Property Owners’ Association and Federation of North Toronto Residents’ Associations.

Kettel said that the Leaside Property Owners’ Association has been involved with the development application since the beginning. As plans were being drawn up, residents asked for this development to be a civic centre with more public space along the main corridors. RioCan has designated space for a community centre at the corner of Laird Drive and Vanderhoof Avenue, but the residents are worried that this was simply done to appease growing concerns over the lack of existing community infrastructure.

“It is quite a disappointment that we are seeing such a sudden increase in density and absolutely no movement on making this a civic plaza,” said Kettel.

The local councillor raised concerns over the density this large development will bring to his ward.

“Maybe in 25 years, when we have a downtown relief line, it would make sense. But I think this level of development is premature.”

“Obviously every local politician wants to maintain the integrity of the neighbourhood they represent, in this case Leaside,” said Ward 26 councillor Jon Burnside. “I think it is too many people into too small of an area.”

The justification for a development at this scale in the Leaside neighbourhood is based primarily on the construction of the light rail transport (LRT) line connecting to the Yonge subway line. However, residents and the local councillor believe a development of this size is too much, too soon.

“Maybe in 25 years, when we have a downtown relief line, it would make sense,” said Burnside. “But I think this level of development is premature given our existing infrastructure.”

According to the Province  of Ontario’s Growth Plan for the Greater Golden Horseshoe, 2017, the area around 815 Eglinton Ave. E. is categorized as a major transit station area (MTSA). The target that must be reached by 2022 is 160 people and jobs per hectare. However, even with the LRT on the horizon, the problem of transit overcrowding remains.

“The prediction is that there will be huge congestion on the Yonge line because of increase in density,” said Kettel.

Nonetheless, RioCan is confident that its development is an appropriate scale.

“We strategically designed the development to minimize impacts to the surrounding neighbourhoods,” said Andrew Duncan, senior vice-president of RioCan Developments. “The scale of our development proposal aligns with the province’s density targets.”

Moving forward, RioCan has made a commitment of ensuring that the concerns of the community are taken very seriously. Given the size of the project, it is expected that this development will become a central gathering spot in this community. This means that close co-operation between developers and residents is important to both parties to ensure all issues are addressed.

“We recognize and appreciate the community’s initial concerns over our development and remain committed to working with them throughout this development process,” said Duncan. “RioCan is focused on embedding people, community and environmental considerations into all of our decision making, and we are proud of the process we have been undertaking with the Leaside community.”