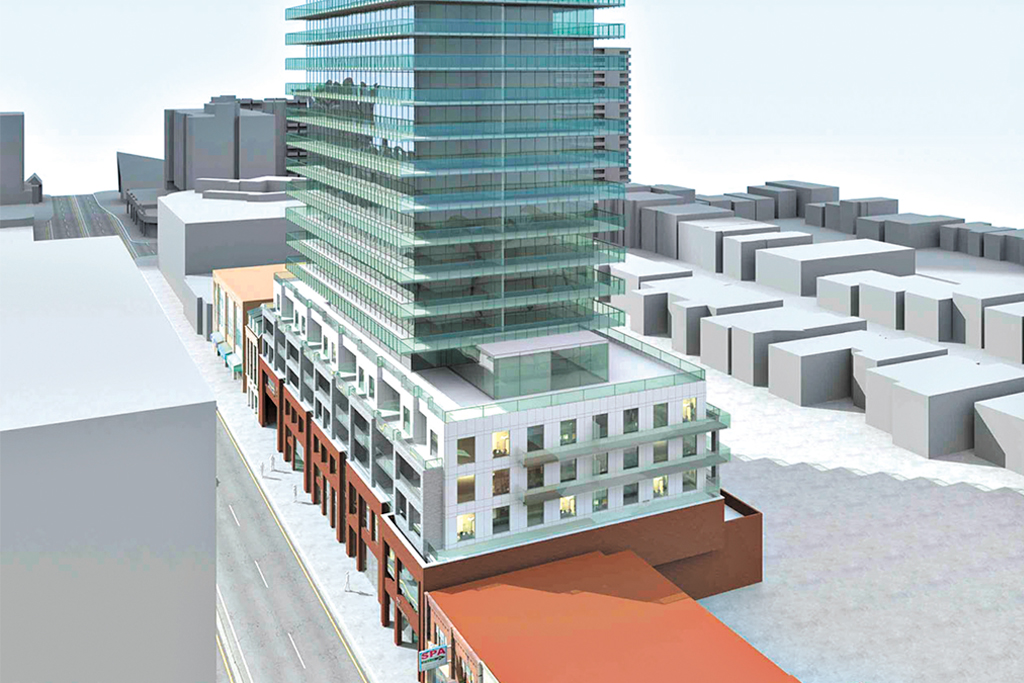 A proposed condo tower near Mount Pleasant Road and Eglinton Avenue East that ballooned in height has residents and city staff worried it will set a new precedent for the area.

The application for 733 Mt. Pleasant Rd. originally called for nine storeys, when submitted in 2018, but was changed to 27 storeys in December 2019 after the province eased restrictions on tower height for the area, according to local councillor Josh Matlow.

In June 2019, the province changed the Midtown in Focus plan without city consultation to allow for taller towers, especially near transit stations. Since 733 Mt. Pleasant Rd. is located around 160 metres from a future LRT station, it is a candidate for higher density.

However, the site is also in the middle of a block of low-rise buildings, which means a tall tower there would stick out and go against “basic urban planning principles,” Matlow said.

“[It] is completely unreasonable for that site,” he added.

Matlow explained that usually there is a transition between taller towers, often close to transit stations and low-rises and residential homes. The towers go on the corners, with height gradually decreasing toward the smaller buildings.

“City planners never recommended a tower on this site,” Matlow said. “They recommended a mid-rise due to the need for transition.”

Above all, Matlow is concerned about the precedent the development might set.

Along with Matlow, residents have also voiced their concern about this development. Andy Gort, the president of the South Eglinton Ratepayers’ and Residents’ Association (SERRA), said that his organization has spoken to city planning, Matlow and the developer.

According to Gort, the area just doesn’t have the services needed to accommodate more people. He pointed to Eglinton Junior Public School being one of the most oversubscribed in the city, recreational centres stretched to their limits and a shortage of parks in the area, giving it one of the lowest ratios of parks to people in the city.

“It’s busy now but about to be busier,” he said. “We’re concerned about general density in the area.”

Even with the new LRT set to open in a few years time in the area, Gort thinks that the development will cause even more congestion on the Yonge subway line since the line is connecting residents from faraway neighbourhoods.

He hoped the residents’ voices will be heard during a virtual community consultation meeting scheduled for late September. However, Gort said the application has already been appealed to the Local Planning Appeal Tribunal (LPAT), a provincial body that will make the final decision, so it is almost entirely out of their hands.

“Whether we agree or disagree, the developers basically signalled they don’t care because they will ask LPAT to decide,” he said.

If the development does go through, it could mean the beginning of the end for the neighbourhood as it currently is.

One famous shop in the area, Mabel’s Fables children’s bookstore, has already been bought by Maple Venture House Investments, along with six other properties on the street, and is on the chopping block for future development.

Although that could be a decade from now, owner of the bookstore, Eleanor LeFave, said she is currently having trouble surviving after being in business for more than 30 years.

She said sales have taken a dramatic hit due to the pandemic and were already falling as a result of the construction of the Crosstown LRT. Now she has to contend with a potential 70 per cent increase to her rent due to her property being assessed for its “highest and best use” by the Municipal Property Assessment Corporation (MPAC).

Since the land could be used for a tall tower, the rent is set to increase to reflect that — a threat facing many businesses across the city, let alone on Mount Pleasant.

“All of the businesses will suffer and close [during its construction],” she said. “There’s no compensation.”

As for how the neighbourhood will look in the future, LeFave offers a bleak outlook.

“Who knows what will evolve after this,” she said.