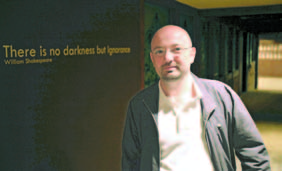 AFTER THREE SUCCESSFUL years in Montreal, last month O.Noir opened a Toronto branch of its unique “dine in the dark” restaurant and invites patrons to come and experience a dining experience like no other. “It’s special because people have to dine in the dark, and they are going to use their other senses to experience the food,” says O.Noir owner and founder Moe Alameddine. “They’re not going to eat with their eyes, and this will lead to a heightened smell and taste.”

The concept for the restaurant traces back to Jorge Spielmann, a blind pastor in Zurich, who opened Blindekuh in 1999, to teach sighted people about visual impairment and also to provide jobs for the blind as servers. The Toronto restaurant will employ between 10 and 12 visually impaired servers, who will guide guests to their seats, bring food to and from the tables and take drink orders.

“There is a unique transfer of trust because patrons must give their trust to blind people to do the job,” says Alameddine. “There is a high unemployment rate among the blind, and this is a way for us to give them some confidence and some hope as they work as valuable members of our team.”

He says the menu consists of French- Mediterranean dishes, and he recommends choosing the “surprise dish” option on the menu for either your main course or dessert, to fully embrace the O.Noir experience. O.Noir is located at 620 Church St., 416-922-6647.

Have croissant will travel

Growing up and working in restaurants and pastry shops in his native France, Charles Imteriale knows his way around croissants and baguettes. And local residents are flocking to his new shop to sample his floury wares.

The shop has a 24-person seating area as well as a bar where patrons can enjoy a coffee and croissant. Current offerings include pastries and desserts along with signature croissants and baguettes. Quiche and sandwiches are available for lunch. Plans are in the works for a patio come 2010. Patisserie Sebastien is located at 3306 Yonge St., 416-544-0333.

Long time coming worth the wait?

The McEwan era finally began on June 19 in sleepy Don Mills with the opening of his flagship, one-of-a-kind, super-duper gourmet food emporium. “I want the store to represent something new and different in the food retailing business — something of the same quality and originality that I like to think I brought to the restaurant scene with North 44, Bymark and One,” says Mark McEwan, owner.

The 20,000-square-foot store is located in the new Shops at Don Mills commercial area and will include everything from a butcher’s counter with USDA prime beef and fish counter with restaurant-calibre product from Montreal fish importer Le Mer to an array of fresh produce and breads from artisanal Quebec bakery Boulart as well as a line of prepared foods. The addition of an EDO sushi outlet was an inspired decision. “Everything you need to make a great meal will be right here,” says McEwan. McEwan is located at 38 Karl Fraser Rd. (Don Mills and Lawrence), 416-444-6262.

Jesse Letofsky, chef and coowner of The Vault restaurant on Avenue Road, had a couple pretty good teachers. After working in the dishpit of Marc Thuet’s restaurant, Letofsky stuck by the acclaimed French chef for 10 years learning the tricks of the culinary trade from him, but also from another of the city’s leading chefs, David Lee, who ran the kitchen at Centro when Thuet was the owner.

Located in a converted bank, The Vault is a French bistro-style restaurant with 60 seats, a patio and a wine cellar located in the bank vault.

Letofsky says entrées are in the $25 range, and his halibut and whole fish are current favourites of the North Toronto faithful who have discovered the restaurant since the soft opening last month. The Vault is located at 2015 Avenue Rd., 416-487-0060.

Marc Thuet made more news last month with the closing of his Atelier Thuet outlet as well as the opening of Conviction, in the location of his flagship restaurant Bite Me. Conviction caused a great deal of buzz when it was announced as a result of former convicts being hired on in the kitchen and as servers to be part of a reality-TV program. Cluck, Grunt and Low on Bloor Street has closed.

Late last month, Trillium Bistro opened up at 1552 Avenue Road in the former location of Locavore, which lasted, say, a couple weeks. Hopefully Trillium Bistro will fair better with its more mainstream Mediterranean and French menu.

In other Avenue Road news, a new funnel cake restaurant is opening up in the old Timothy’s Coffee space, dubbed Fun L Fun. At 579 Mt. Pleasant Road, Florentia, billed as an “authentic Italian restaurant” has opened up (416-545-1220).

The Rubino brothers Guy and Michael have closed down their restaurant Rain for conversion to a new Japanese concept dubbed Ame (Japanese for “rain”) schedule to open mid-July. Jamieson Kerr, owner of Crush Wine Bar in downtown Toronto has opened a new pub called Queen & Beaver Public House. It is housed in an old Victorian building located at 35 Elm St.