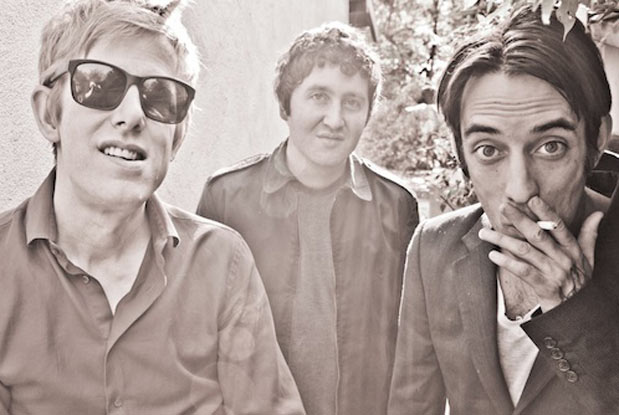 A roadie strategically placed fresh towels around the stage before Divine Fits played their sold-out show at Lee’s Palace last night, foreshadowing the sweaty mess that was about to follow.

After an energetic opening set from Toronto group Hooded Fang, Divine Fits took to the stage for only the twelfth time since getting together. Still, it instantly became clear that this wasn’t their first rodeo.

For any who have seen these guys perform on stage previously, you will understand that Divine Fits is a fitting title. Boeckner and Daniel gyrate to the music in a way that only Iggy Pop would. It’s contagious: their songs share that same wired aesthetic — sometimes unnerving, but balanced by sharp, witty instrumentation.

Decked out in monochromatic garb, they jumped right into their debut record, A Thing Called Divine Fits, which was released last week. With just 11 tracks on the album, the set was shorter than we would have hoped for. But with each song, the band pumped out synth-heavy electro beats and finger-melting guitar riffs which radiated up through the floors and had just about everyone in attendance pulsating.

There are elements of their past projects: Boeckner’s gritty and haunting vocals play well to Daniel’s breezy and smooth voice. But these 11 tracks are devoted to synthesizers and electronica while tipping a hat to ’80s new wave, heard in tracks such as “My Love is Real” — which Boeckner climbed down into the crowd to sing.

Whether Divine Fits has staying power remains to be seen. They’ve been dubbed a supergroup — which was evidenced by the throng of fans that made it out to last night’s gig — and that comes with hyped-up expectations. And while Daniel, Boeckner and Brown have the chemistry and synchronization of a group that has played way more than just 12 shows, at this point, Divine Fits is at risk of fading into vanity project territory.

For now, A Thing Called Divine Fits certainly does what it can to fill the holes left by Wolf Parade and Handsome Furs, but only time (or their next record, slated for release in 2013), will tell if they can push through the boundaries defined by their former bands.